The mother, right, and sister of Army Col. Oleksander Makhachek mourn over the coffin with his remains during a funeral service in Zhytomyr, Ukraine, Friday, June 3, 2022.

Today marks the 100th day since the Russian invasion of Ukraine on 24 February, which started the bloodiest conflict in Europe in decades.

Brutal fighting continues in the eastern region of Donbas. Meanwhile, the EU has formally approved the long-awaited embargo on Russian oil imports.

Follow our blog below for all the latest developments, or click on the video player above for our live coverage:

US President Joe Biden says a “negotiated settlement” will be needed to end the Russian war in Ukraine.

The African Union leader met with Vladimir Putin in Moscow and says he was “reassured” by Russia and found Putin aware that the crisis and sanctions are creating serious problems for weaker economies.

The UN has been holding talks to try and ease a blockade of ports by Russian forces to allow Ukrainian agriculture products to be exported to international markets. Meanwhile, Ukraine’s ambassador said Turkey is among those buying grain stolen by Russia.

100 days in, Russia has achieved none of its strategic objectives, says the British Ministry of Defence.

About 60% of Lysychansk has been completely devastated, said a Ukrainian official.

The LNR said in a statement to the pro-Russian media in the region that the decision was made in “a response to the increasing use of the service as part of the enemy’s military infrastructure to obtain geolocation data of our critical military-civilian infrastructure.”

In DNR, the leader of the pro-Russian militants, Denis Pushilin, signed off a decision to restrict access to the popular messenger app to “avoid the dissemination of illegal information; inaccurate civilian and military information” and “propaganda regarding violence, information, and psychological pressure,” Ukrayinska Pravda reported.

Russian President Vladimir Putin on Friday blamed the West for emerging global food and energy crises and repeated his government’s offers of safe passage for ships exporting grain from Ukraine if mines are removed from the waters.

“Of course, we are now seeing attempts to shift the responsibility for what is happening on the world food market, the emerging problems in this market, onto Russia,” he told Russian state TV.

The Kremlin leader said Russia was not blocking grain shipments from Ukraine and that the West is using Russia as a scapegoat for its problems.

“I must say that this is an attempt, as our people say, to shift these problems from a sick to a healthy head.”

As reported by the state-run Tass news agency, Putin also said Western sanctions against Russia would only worsen world markets, reducing the harvest and driving up prices.

Putin pledged that if the waters were demined, Russia would not attack grain shipments and suggested they could be made from the Ukrainian port of Berdyansk or other countries, such as Belarus. Berdyansk is under Russian occupation.

Putin’s positions on these issues are in conflict with the explanations given by Ukraine and its allies.

The Cube: How Russian state media narrative distorts truth about war in Ukraine

As the war in Ukraine reached its 100-day mark, Russian state television remained silent about this landmark date.

However, over these past few weeks, the country’s pro-Kremlin outlets have consistently given Russian citizens a distorted view of the conflict in Ukraine and the impact of the West’s sanctions.

Read more and watch our The Cube segment here: 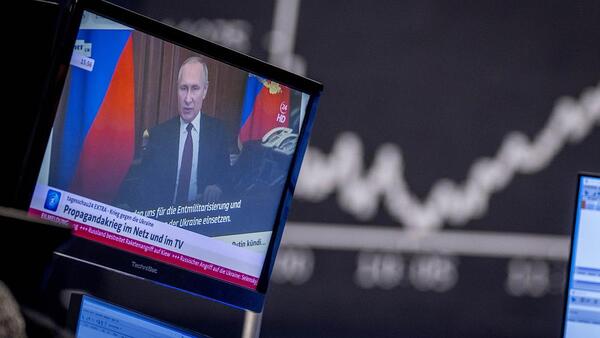 French President Emmanuel Macron said on Friday that his Russian counterpart Vladimir Putin had made a “historic and fundamental mistake” by attacking Ukraine and that he was now “isolated”.

“I think — and I told him — that he made a historic and fundamental mistake for his people, for himself and for history,” Macron said on the 100th day of the conflict, in an interview with a French regional outlet.

“I think he isolated himself. It is one thing to isolate oneself — knowing how to get out of it is difficult,” Emmanuel Macron also stressed.

The French president repeated that it was necessary “not to humiliate Russia” — words that were very badly received in Eastern Europe — “so that the day the fighting stops, we can build a way out through diplomatic channels”.

Pressed to go to Kyiv, while many of his European counterparts have already been there, he said he was “not excluding anything” at this time.

“We want to increase financial and military support to Ukraine. And finally, to do everything to get the grain out of Ukraine,” he added, contradicting Putin, for whom the export of grain was “not a problem”.

Switzerland’s government on Friday said it would not honour a request by Denmark to send 22 Swiss-made armoured personnel carriers to Ukraine, citing Swiss “neutrality law” that bans the export of war material to a country at war.

Denmark had requested that Switzerland transfer the Swiss-made Piranha III wheeled armoured personnel carriers, which Denmark had procured and stored in Germany, to Ukraine.

The executive Federal Council confirmed the decision on Friday just as the Swiss government also announced that it would allow the transfer of some military equipment to Germany and the UK as they replenish supplies that the two countries have sent to Ukraine.

The announcement testified to the fine line Swiss authorities are treading to hold to Switzerland’s legal requirement to remain neutral as laid out in the War Materiel Act, which bars the transfer of Swiss-made weapons systems, ammunition and other materiel to a country involved in an international conflict.

Biden says ‘negotiated settlement’ will be needed to end the war

President Joe Biden on Friday said he thinks a “negotiated settlement” will be necessary to end Russia’s war in Ukraine.

Asked whether Ukraine should give up some of its territory to Russia in order to end the war and bring peace to the region, Biden said his policy continues to be that the United States will not make any decisions about Ukraine without Ukraine.

He said “it’s their territory” and “I’m not going to tell them what they should and shouldn’t do.”

But the US leader also said “it appears to me that at some point along the line there’s going to have to be a negotiated settlement here.” He said he does not know what such an agreement would look like but that the U.S. will continue to help Ukrainians defend themselves.

Biden commented from Delaware on Friday, the 100th day of Russia’s invasion.

Russia is playing ‘hunger games’ with the world over Ukraine exports

A Ukrainian ambassador said Russia is playing “hunger games” with the world by trying to depict sanctions against Moscow as the reason that grain can’t transit the Black Sea – and not Russia’s invasion of Ukraine.

Yevheniia Filipenko, Ukraine’s envoy to the UN office in Geneva, spoke in an interview on the 100-day mark since Russian military forces invaded Ukraine on 24 February.

As grain exports dry up through Ukraine’s embattled or captured ports, Filipenko said Russia has sought to pin the blame for the blockage on Ukraine and Western sanctions that have been levied by the thousands against Moscow.

“Russia has played hunger games recently to put the blame on Ukraine and others for blocking Ukrainian food exports,” she said.

Filipenko said Ukrainian forces were intensely motivated to protect their homeland and would one day win the war. She echoed calls from other top Ukrainian officials for more weapons.

“We are fighting for freedom of Europe and the whole world. So the next 100 days will be very busy for all of us,” she said.

Two journalists from the international news agency Reuters were slightly wounded in eastern Ukraine, while their driver, supplied by pro-Russian separatists, was killed, the agency said on Friday.

“Two Reuters journalists were slightly injured when they were shot at while on their way to Severodonetsk,” a spokesman said.

No further details were given on their identities, their health or the circumstances of the shooting.

On Monday, Frederic Leclerc-Imhoff, a journalist working for the French channel BFMTV, was killed in eastern Ukraine by shrapnel during a bombing raid while monitoring a humanitarian operation.

French Foreign Minister Catherine Colonna, said in a tweet that the 32-year-old reporter had been “killed by Russian shelling”.

Since the start of Russia’s invasion of Ukraine, at least eight journalists have died in the field in the course of their work, according to a count by the NGO Reporters Without Borders (RSF).

Ukraine live: US vows to hold Russia accountable for crimes committed by its forces

Cases of inflammatory condition, MIS-C, in children spike at pediatric…

Jailed Iranian musician: ‘We need human rights… not a…

Sleaze row: UK is ‘not remotely a corrupt…