Ukrainian refugees walk along vehicles lining-up to cross the border from Ukraine into Moldova, February 26, 2022

The number of people forced to flee conflict, violence, human rights violations and persecution has passed the 100 million milestone for the first time on record, propelled by the war in Ukraine and other deadly conflicts, says the UNHRC.

The fighting in Ukraine continues, with attention now turning to the eastern city of Sievierodonetsk. Meanwhile, Poland’s president, Andrzej Duda, told Ukraine’s parliament on Sunday night that sacrificing any Ukrainian territory would be ‘huge blow’ to the West.

See a summary of the day’s developments below.

Global refugee population tops 100m for the first time on record, according to the UNHRC.Global economy faces perhaps its biggest test since World War II, says IMF chief.Sacrificing any Ukrainian territory would be ‘huge blow’ to West, says Polish president.

YouTube has taken down more than 70,000 videos and 9,000 channels related to the war in Ukraine for violating content guidelines, including removal of videos that referred to the invasion as a “liberation mission”, reports The Guardian.

Since the conflict began in February, YouTube has taken down channels including that of the pro-Kremlin journalist Vladimir Solovyov, while channels associated with Russia’s Ministries of Defence and Foreign Affairs have also been temporarily suspended from uploading videos describing the war as a “liberation mission”, the British newspaper reports.

German Economy Minister Robert Habeck is disappointed that the EU has not yet agreed to an oil embargo targeting Russia, he said in a radio interview, adding that Germany would be willing to forego Hungary’s participation to speed up the proposed ban.

“If the Commission president says we’re doing this as 26 without Hungary, then that is a path that I would always support,” Habeck told the Deutschlandfunk broadcaster ahead of talks with political and industrial leaders at the World Economic Forum in Davos.

“But I have not yet heard this from the EU,” he added.

Among the 27 EU member states, Hungary is the most vocal critic of the planned embargo on Russian oil.

Ukraine and Poland agreed on Sunday to establish a joint border customs control and work on a shared railway company to ease the movement of people and increase Ukraine’s export potential, reports the Associated Press.

Ukrainian President Volodymyr Zelenskyy and Polish President Andrzej Duda touted the increased cooperation between the two countries during a meeting in Kyiv on Sunday, with Duda offering Warsaw’s backing for the embattled neighbour.

Ukraine’s Infrastructure Minister Oleksander Kubrakov said that the two neighbours were working on easing transport of Ukraine’s goods to the European Union.

The war in Ukraine, one of the world’s major exporters of wheat and corn, has caused global prices to soar.

Nearly 25 million tonnes of grains are stuck in Ukraine, unable to leave due to infrastructure challenges. Ukraine used to export most of its goods through seaports but since Russia’s invasion it has been forced to export by train or via its small Danube River ports.

Zelenskyy also said that the joint customs control might help to ease the country into the EU.

“It is also the beginning of our integration into the common customs space of the European Union,” he said.

Pro-democracy Belarusian dissidents are conducting war games and learning how to fire pistols and other guns in Poland, my colleague Rebekah Daunt reports. 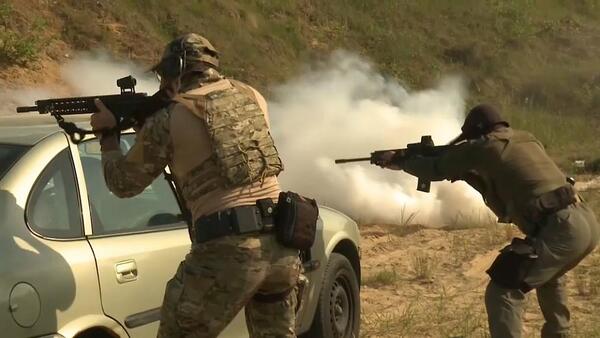 Study: Newborns who sleep better are less likely to be…

In its latest Defence Intelligence update, the British Ministry of Defence has said that in the first three months of its ‘special military operation’, Russia has likely suffered a similar death toll to that experienced by the Soviet Union during its nine year war in Afghanistan.

“A combination of poor low-level tactics, limited air cover, a lack of flexibility, and a command approach which is prepared to reinforce failure and repeat mistakes has led to this high casualty rate, which continues to rise in the Donbas offensive,” it said, adding:

“The Russian public has, in the past, proven sensitive to casualties suffered during wars of choice. As casualties suffered in Ukraine continue to rise they will become more apparent, and public dissatisfaction with the war and a willingness to voice it may grow.”

The number of people forced to flee conflict, violence, human rights violations and persecution has crossed the staggering milestone of 100 million for the first time on record, propelled by the war in Ukraine and other deadly conflicts, the UN Refugee Agency said in a press release.

“One hundred million is a stark figure – sobering and alarming in equal measure. It’s a record that should never have been set,” said UN High Commissioner for Refugees, Filippo Grandi. “This must serve as a wake-up call to resolve and prevent destructive conflicts, end persecution, and address the underlying causes that force innocent people to flee their homes.”

According to the agency, the number of forcibly displaced people worldwide rose towards 90 million by the end of 2021, propelled by new waves of violence or protracted conflict in countries including Ethiopia, Burkina Faso, Myanmar, Nigeria, Afghanistan and the Democratic Republic of the Congo.

The war in Ukraine has displaced a further 8 million within the country this year, it said, with more than 6 million refugee movements from Ukraine having been registered.

At over 1% of the global population, the overall refugee population is equivalent to the 14th most populous country in the world.

Ukrainians are digging in to defend the eastern city of Sievierodonetsk, which has come under heavy bombardment from Russian forces.

Sievierodonetsk is the main city under Ukrainian control in Luhansk province, which together with Donetsk province make up the Donbas.

Luhansk’s governor, Serhii Haidai, said Sunday that the Russians were “simply intentionally trying to destroy the city … engaging in a scorched-earth approach.”

He said the Russians had occupied several towns and cities in Luhansk after indiscriminate, 24-hour shelling. Haidai added that Moscow was concentrating forces and weaponry there, bringing in troops from Kharkiv to the northwest, Mariupol to the south, and from inside Russia.

The sole working hospital in Sievierodonetck has only three doctors and supplies for 10 days, he said.

The Ukrainian military said Russian forces had mounted an unsuccessful attack on Oleksandrivka, a village outside of the city.

Kristalina Georgieva, the managing director of the International Monetary Fund, warned participants at the opening of the World Economic Forum in Davos that the global economy faces perhaps its “biggest test since the Second World War”.

Georgieva said Russia’s invasion was “devastating lives, dragging down growth and pushing up inflation”, and urged countries not to “surrender to the forces of geo-economic fragmentation that will make our world poorer and more dangerous,” reports the Financial Times.

The speech came as Ukraine steps up its bid to give Ukrainians hope of a brighter future, with a $1 trillion (€945 billion) package of reconstruction support, financed through confiscating frozen Russian assets.

Sacrificing any Ukrainian territory would be ‘huge blow’ to West, says Polish president

Air raid sirens blared across Ukraine on Monday morning, sounding the daily alarm ahead of anticipated attacks by Russian forces in the east and south of the country.

Russia has stepped up its pounding of the Donbas and Mykolaiv regions with air strikes and artillery fire, in what Ukraine has described as a “scorched-earth” strategy to win control of the eastern front.

“The war must end with the complete restoration of Ukraine’s territorial integrity and sovereignty,” Andriy Yermak, Ukraine’s presidential chief of staff said in a Twitter post on Sunday.

Polish President Andrzej Duda offered Warsaw’s backing, telling lawmakers in Kyiv on Sunday that the international community had to demand Russia’s complete withdrawal and that sacrificing any territory would be a “huge blow” to the entire West.

“Worrying voices have appeared, saying that Ukraine should give in to Putin’s demands,” Duda said, the first foreign leader to address the Ukrainian parliament in person since Russia’s Feb. 24 invasion.

“Only Ukraine has the right to decide about its future.”

Ukraine war: Girl among three killed in bombing of children’s…

15 must-try spirits, liqueurs and canned cocktails (as seen at Bar…

Choosing the right treatment is key to relieving back pain

Should Mohamed Salah be considered as the greatest African…