Men work at repairing a building damaged by shelling in Makariv, on the outskirts of Kyiv, Ukraine, Friday, May 27, 2022

Russia-backed separatists claimed they captured a railway hub city in eastern Ukraine as Moscow’s forces pushed to gain more ground Friday by pounding another Ukrainian-held area where authorities say 1,500 people have died since the start of the war.

Elsewhere, British Prime Minister Boris Johnson said that Russian President Vladimir Putin was making slow but “palpable” progress in the Donbas region, despite the cost to the Russian military, while pro-Russia separatists claim to have taken the strategic town of Lyman.

Follow developments on Friday as they unfolded in our blog below:

Boris Johnson says Russia is making ‘palpable’ progress in eastern Ukraine, despite the cost to the Russian military.

US and Ukraine discuss danger of escalation as new arms extend Kyiv’s reach.

At least 1,500 dead in city of Sievierodonetsk, says mayor.

Russia-backed separatists claimed they captured a railway hub city in eastern Ukraine as Moscow’s forces pushed to gain more ground Friday by pounding another Ukrainian-held area where authorities say 1,500 people have died since the start of the war.

Some European leaders sought dialogue with Russian President Vladimir Putin toward ending a war in its 93rd day that has ravaged both Europe and Russia’s economies. While Britain’s foreign minister worked to rally the West’s continued support for Ukraine.

“There should be no talk of ceasefires, or appeasing Putin. We need to make sure that Ukraine wins. And that Russia withdraws and that we never see this type of Russian aggression again,” UK Foreign Secretary Liz Truss said.

But in Ukraine’s east, Russia has the upper hand. The fighting Friday focused on two key cities: Sievierodonetsk and nearby Lysychansk. They are the last areas under Ukrainian control in Luhansk, one of two provinces that make up the Donbas and where Moscow-backed separatists have controlled some territory for eight years.

“There are battles on the outskirts of the city. Massive artillery shelling does not stop, day and night,” Sievierodonetsk Mayor Oleksandr Striuk told The Associated Press. “The city is being systematically destroyed – 90% of the buildings in the city are damaged.”

An assault was underway in the city’s northeastern quarter, where Russian reconnaissance and sabotage groups tried to capture the Mir Hotel and the area around it Friday, Striuk said.

At least 1,500 people have died in Sievierodonetsk because of the war since Russia invaded Ukraine on 24 February, he said.

The figure includes people killed by shelling or in fires caused by Russian missile strikes, as well as those who died from shrapnel wounds, untreated diseases, a lack of medicine or while trapped under rubble, according to the mayor.

In Donetsk, the Donbas region’s other province, the Russia-backed rebels said Friday they took control of Lyman, a large railway hub north of two more key cities that remain under Ukrainian control.

Russian President Vladimir Putin says that Ukraine should remove sea mines from areas near its ports to allow safe shipping.

Putin made the statement in Friday’s call with Austrian Chancellor Karl Nehammer, according to the Kremlin readout of the conversation. It said that Putin and Nehammer “had a detailed exchange of views on issues regarding food security” with Putin rejecting Western claims that Russia’s action that exacerbated a global food crisis.

The Kremlin noted that “Putin emphasised that attempts to blame Russia for difficulties regarding shipments of agricultural products to global markets are unfounded.” It added that the Russian leader “gave a detailed explanation of the real roots behind those problems that emerged, in particular, because of the U.S. and the EU sanctions against Russia.”

The US and other Western allies have rejected the Russian demand for the sanctions to be lifted and accused Moscow of blocking grain supplies from Ukraine to global markets – accusations the Kremlin has denied.

Russian President Vladimir Putin says accusations against Russia, which is being held responsible for problems with global grain deliveries, are “unfounded.”

He made the comments in a Friday telephone call with Austrian Chancellor Karl Nehammer.

Western allies say Russia is blocking Ukrainian ports and stopping agricultural produce from being exported, which has lead to increased global food prices.

“Vladimir Putin stressed that attempts to blame Russia for difficulties in delivering agricultural products to world markets were unfounded,” the Kremlin said in a statement.

More than five thousand employees of Russian truck producer Kamaz have been put on short-time work due to a shortage of components resulting from Western sanctions against Moscow.

“At Kamaz, a three-day week has been introduced: managers, specialists and employees of production sites experiencing a shortage of components have started working reduced hours,” the group’s news portal, Vesti Kamaza, reported on Thursday.

The group assures that “temporary jobs” have been offered to these people, in order to “maintain the level of income of its employees and to conserve the workforce”, said Romaniouk, quoted by Vesti Kamaza.

Unemployment is looming for employees in many sectors of the Russian economy as the impact of unprecedented Western sanctions is felt.

Short-time work is often used to avoid lay-offs but is usually accompanied by a reduction in salary.

Pressed by Western sanctions against Russia, Renault, the country’s leading carmaker with the Lada brand which it had managed to turn around, sold its assets to the Russian state in May, the first major nationalisation since the Russian offensive in Ukraine.

A large number of the nearly 40,000 employees of the automotive giant Avtovaz (Lada) are now unemployed

Nearly 3 million Ukrainian refugees have left the countries bordering Ukraine, where they flocked after the Russian invasion, to move to other non-neighbouring European countries, the UN High Commissioner for Refugees (UNHCR) said on Friday.

A total of 6,659,220 Ukrainians have fled their country since the Russian invasion on February 24, according to UNHCR figures. Of these, more than 3.5 million have headed west to Poland.

“According to the latest data we have (…) 2.9 million refugees have moved beyond Ukraine’s neighbours,” UNHCR spokesperson Shabia Mantoo told a news briefing in Geneva.

The largest numbers of Ukrainian refugees in non-neighbouring countries were in Germany, the Czech Republic and Italy, the UN agency said.

Poland remains the main country of arrival. At the beginning of March, about 100,000 refugees a day were arriving at the Polish border, but the number slowed to about 20,000 during May.

“They often arrive in a state of distress and anxiety, having left behind family members,” she told the news conference, via video link from a refugee registration centre in Warsaw.

More than 1.1 million people have registered with the Polish authorities and received a state identification number that gives them access to public services, according to UNHCR.

At least 4,000 civilians killed since Russia’s invasion began, with that number likely much higher, says OHCHR

More than 4,000 civilians have been killed in Ukraine since Russia’s invasion began on 24 February, although the true number is likely much higher, the UN rights office (OHCHR) said in a statement on Friday.

In total, 4,031 people have been killed, including nearly 200 children, according to OHCHR, which has dozens of monitors in the country. Most were killed by explosive weapons with a wide impact such as shelling from heavy artillery or airstrikes.

It did not attribute blame for the deaths. Russia has denied targeting civilians in the conflict.

Ukrainians in Zelenskyy’s city describe him as ‘symbol’ of country

Ukraine’s President Volodymyr Zelenskyy has become a symbol in Ukraine. Euronews International Correspondent Anelise Borges visits the town where the president grew up. 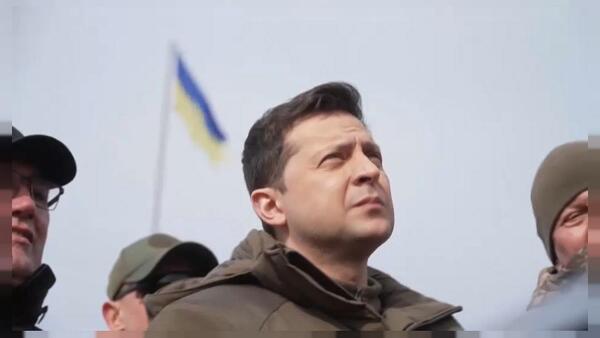 Ukrainians in Zelenskyy’s city describe him as ‘symbol’ of country

Russian solider, 21, on trial for murdering civilian in…