Scattered grain sits inside a warehouse damaged by Russian attacks in Cherkaska Lozova, outskirts of Kharkiv, eastern Ukraine, Saturday, May 28, 2022.

Senegalese President Macky Sall, who also presides over the African Union, told European Union leaders that Russia’s blockade of Ukraine’s ports is paving the way for a “catastrophic scenario” of widespread shortages and price hikes across the African continent.

It comes as Ukrainian President Volodymyr Zelenskyy said Russia’s blockade of Ukrainian seaports was preventing Kyiv from exporting 22 million tonnes of grain and accused the country of deliberately creating this problem to cause suffering elsewhere.

EU leaders are set to discuss food security at a Council summit today.

Follow the latest developments on the war in Ukraine in our live blog below:

Russia’s blockade of Ukrainian ports could be “catastrophic” for Africa, according to the chair of the African Union.

Russian troops are in control of up to half of Sievierodonetsk, with Ukrainian authorities asking civilians to shelter in place.

The team investigating war crimes in Ukraine meets in The Hague today.

The first ship leaves Russian-occupied Mariupol, according to reports.

EU leaders agree to ban 90% of Russian oil by year-end.

The European Union has appealed to its international partners not to inhibit farm products with trade barriers, as Russia’s war in Ukraine raises the risk of a potential food crisis.

“We call on all partners not to restrict trade on agricultural products,” European Commission President Ursula von der Leyen said, following an EU summit on Tuesday in the Belgian capital.

Russia is blocking the export of 22 million tons of its grain, some of which is bound for Africa, Ukraine has claimed.

Countries in Africa are heavily reliant on Ukraine for their wheat, which is the fifth largest producer of the crop in the world.

They imported 44% of their wheat from Russia and Ukraine between 2018 and 2020, according to the United Nations.

Von der Leyen said the EU is trying to help get food out of Ukraine by road and rail, instead of the traditional shipping routes, which are under Russian blockade.

However, she said land transport assistance may only provide for a fifth of Ukraine’s usual monthly exports.

“It is of course more tedious and expensive, but it is necessary to get this wheat out,” she said.

Russian President Vladimir Putin has pinned blame on the emerging food crisis on the EU’s sanctions, which he said are increasing prices.

Putin said he is willing to help ease the situation if sanctions against his country are lifted.

A chemical plant in Sievierodonetsk, a city in easter Ukraine, has been hit by an airstrike, Ukrainian officials wrote on Telegram late Tuesday afternoon.

Serhiy Haidai, the governor of Luhansk region, said Russians hit “a tank with nitric acid at a chemical plant.”

He appealed to residents not to come out of hiding due to the acid’s toxic fumes.

Anton Gerashchenko, an adviser to Kyiv’s ministry of internal affairs shared a similar message on Telegram, alongside an image of plumes of smoke rising from a building.

Russian forces now control “around half” of the strategic city, a day after Ukrainian officials reported that Russian shelling was so intense that it was not possible to count casualties or assess damage.

Aisoltan Niyazova, a member of the Russian dissident performance and art group Pussy Riot, has been arrested by Croatian border police on Monday, according to domestic press.

Niyazova, who is originally from Turkmenistan, has been placed on Interpol’s wanted persons’ list since April 2003 for alleged embezzlement of $20 million (€18.6m).

She is accused of stealing the money from the Central Bank of Turkmenistan and siphoning it out of the country, which Niyazova rejects, claiming that the charges have been trumped up due to her opposition to the hermit country’s government.

Niyazova has already been brought in front of the court in Croatia, and the country is now deciding on whether to extradite her, other group members told Večernji List.

With the group on tour, she was already questioned in Slovenia prior to trying to enter Croatia but was released.

The band members claim she was issued an affidavit by Slovenian authorities which should allow her to travel freely, as she fears extradition would lead to politically-motivated sentencing in her home country.

Pussy Riot and its members have been targeted by the Kremlin for their opposition to human rights abuses in Russia, with several members spending time in jail or house arrest due to their activism.

Earlier in May, another member of the group Maria Alyokhina fled Russia, claiming she was able to shake her police monitors by disguising herself as a meal courier.

French President Emmanuel Macron vowed his country will continue to “fight against impunity” after a French journalist was killed by shell shrapnel while covering a Ukrainian evacuation operation.

Frédéric Leclerc-Imhoff, 32, was killed on Monday as he was covering a humanitarian operation near Sievierodonetsk, a key city in the Donbas region that is being hotly contested by Russian and Ukrainian forces, according to his employer, French news broadcaster BFM TV.

Russia “is breaching all international laws,” he said.

Chancellor Olaf Scholz says Germany is working on an arrangement with Greece that would see Athens deliver old military equipment to Ukraine and get armoured personnel carriers from Germany to fill the gap.

Germany has faced criticism for a perceived reluctance to deliver heavy weapons to Ukraine, which the government rejects. It points, among other things, to arrangements for NATO allies to provide older equipment — particularly of Soviet design — to Kyiv and then have modern material supplied by Germany.

Scholz pointed to an arrangement already made with the Czech Republic, saying he had agreed with Greek Prime Minister Kyriakos Mitsotakis to draw up a similar deal after the EU summit.

He did not give details but said it would be finalised by the countries’ defence ministries and could be implemented quickly.

Scholz said he also spoke to his Polish counterpart about such arrangements.

The Norwegian Refugee Council says thousands of civilians caught in Sievierodonetsk are “in dire need of aid.”

It is calling for humanitarian organisations to be allowed to access the eastern Ukrainian city “with lifesaving assistance and to enable safe evacuations of civilians who wish to leave.”

He added that the organisation “cannot save lives under the hail of grenades”.

Ukraine has identified more than 600 Russian war crime suspects and has started prosecuting around 80 of them, Kyiv’s top prosecutor said on Tuesday.

Venediktova said Estonia, Latvia and Slovakia had decided to join an international investigation team in Ukraine.

Russia’s blockade of Ukrainian ports could be ‘catastrophic’ for Africa

The chair of the African Union, Senegal’s President Macky Sall, has told European Union leaders that Russia’s blockade of Ukraine’s ports is paving the way for a “catastrophic scenario” of widespread shortages and price hikes across his continent.

In an address to leaders gathered in Brussels Tuesday for a summit focused on helping Ukraine, Sall said that a halt to grain and fertiliser exports via the Black Sea is very worrying for a continent hosting 282 million undernourished people. He said that the price of fertiliser across Africa has already tripled compared to 2021.

“According to some estimates, cereal yields in Africa will fall by 20 to 50% this year,” Sall said. “We would like to see everything possible done to free up available grain stocks and ensure transportation and market access.”

Charles Michel, the EU Council president, said that “the EU is sparing no efforts to free Ukraine’s exports over land and exploring alternative sea routes.”

African countries imported 44% of their wheat from Russia and Ukraine between 2018 and 2020, according to UN figures. The African Development Bank is already reporting a 45% increase in wheat prices on the continent.

Many of Ukraine’s historic monuments have been destroyed in the three months since Russia invaded the country, but cultural experts are working to conserve their memory using cutting-edge technology and 3D scans.

Find out more about it below. 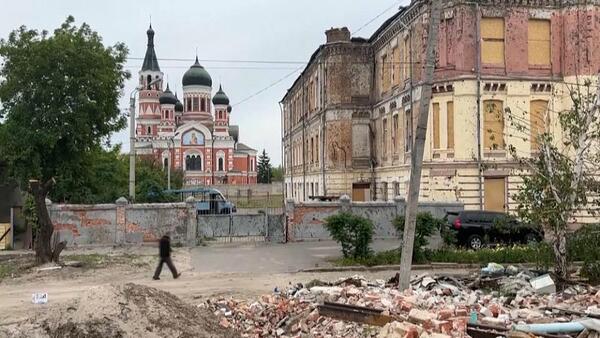 A horror lover’s dream: House from A Nightmare On Elm street listed in time…