Ukraine live: US vows to hold Russia accountable for crimes committed by its forces

A Ukrainian serviceman patrols a village near the frontline in the Donetsk oblast region, eastern Ukraine, Thursday, June 2, 2022.

The United States and its allies are vowing to hold Russia accountable for crimes committed by its forces since the invasion of Ukraine on 24 February.

Meanwhile, brutal fighting continues in the eastern region of Donbas, but there has been “some progress” in the city of Sievierodonetsk, according to Ukrainian President Volodymyr Zelenskyy.

Follow our live coverage below to see how events unfold on Friday.

100 days in, Russia has achieved none of its strategic objectives, says British Ministry of Defence.

Prosecutors investigating war crimes cases in Ukraine are examining allegations of the forcible deportation of children to Russia, as they seek to build a genocide indictment, the country’s top prosecutor said in an interview.

International humanitarian law classifies the forced mass deportation of people during a conflict as a war crime. Forcibly transferring children in particular qualifies as genocide, the most serious of war crimes, under the 1948 Genocide Convention.

Prosecutor General Iryna Venediktova, who is overseeing multiple war crimes inquiries in Ukraine, said: “we have more than 20 cases about forcible transfer of people” to Russia from various regions across the eastern European country since the invasion began on 24 February.

“From the first days of the war, we started this case about genocide,” Venediktova told Reuters.

She said that focusing on the removal of children offered the best way to secure the evidence needed to meet the rigorous legal definition of genocide: “That’s why this forcible transfer of children is very important for us.”

Ukraine’s human rights ombudswoman, Lyudmyla Denisova, said in mid May that Russia had relocated more than 210,000 children during the conflict, part of more than 1.2 million Ukrainians who Kyiv said have been deported against their will.

Mykhailo Podolyak, an adviser to Ukrainian President Volodymyr Zelenskyy, has hit back against suggestion from Russia that Ukraine will use US-supplied Multiple Launch Rocket Systems to attack facilities in Russia.

“Ukraine is waging a defensive war and does not plan to use the MLRS to attack facilities in Russia. Our partners know where their weapons are used,” Podolyak wrote.

The US agreed earlier this week to supply the truck-mounted high-tech rocket systems to Ukraine as part of a new $700 million (€653 million) round of military support, as the country continues to defend itself against Russia’s invasion.

Ursula von der Leyen, the President of the European Commission, posted a message on Twitter to mark 100 days since Russia’s invasion of Ukraine.

“100 days ago Russia unleashed its unjustifiable war on Ukraine. The bravery of Ukrainians commands our respect and our admiration. The EU stands with Ukraine,” she wrote.

Patriarch Kirill, the head of Russia’s Orthodox Church, will be excluded from the latest package of EU sanctions against Russia after Hungary’s objection, three diplomats have told Euronews.

The last-minute move from Budapest angered diplomats, with one calling it “hostage policy.” 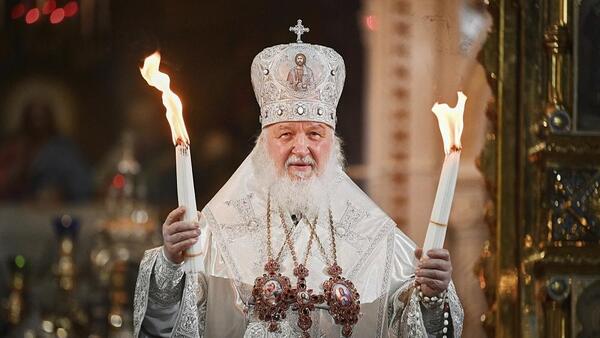 100 days in, Russia has achieved none of its strategic objectives, says British MoD

In its latest Defence Intelligence update, the British Ministry of Defence highlighted the progression of the war in Ukraine over the last 100 days.

It pointed out that Russian forces failed to achieve their initial objectives to seize Kyiv and Ukrainian centres of government, and that following the failure of the initial plan Russia adapted its operational design to focus on the Donbas.

“Russia is now achieving tactical success in the Donbas. Russian forces have generated and maintained momentum and currently appear to hold the initiative over Ukrainian opposition,” it said, adding that Russia now controls over 90% of Luhansk Oblast, and is likely to complete control in the next two weeks.

“Russia has achieved these recent tactical successes at significant resource cost, and by concentrating force and fires on a single part of the overall campaign. Russia has not been able to generate manoeuvre or movement on other fronts or axes, all of which have transitioned to the defensive.”

Even so, looking back over the last 100 days, the ministry said that measured against Russia’s original plan, none of the strategic objectives have been achieved. “In order for Russia to achieve any form of success will require continued huge investment of manpower and equipment, and is likely to take considerable further time.”

The United States on Thursday added 71 Russian and Belarusian entities to its trade blacklist, including several aircraft factories, shipbuilding and research institutes in its latest effort to deprive the Russian military of US technology and other items.

The export restrictions are among a raft of new sanctions Washington imposed on Thursday in response to Russia’s war in Ukraine, including prohibitions on additional Russian oligarchs and members of the country’s elite.

The companies added include several aircraft plants and the Voronezh Joint Stock Aircraft Company, one of the largest Russian factories for passenger and cargo aircraft.

In total, the US Commerce Department has now added 322 entities to its economic blacklist for support of Russia’s military since February.

“The US and our international partners have put in place strong, sweeping restrictions on Russia’s ability to obtain the items and technologies it needs to sustain its military aggression,” said Under Secretary of Commerce for Industry and Security Alan Estevez.

US vows to hold Russia accountable for crimes

The United States and its allies are vowing to hold Russia accountable for crimes committed by its forces since the invasion of Ukraine on 24 February.

US Undersecretary of State Uzra Zeya told a UN Security Council meeting Thursday that in nearly 100 days the world has seen Russian forces bomb maternity hospitals, train stations, apartment buildings and homes and even kill civilians cycling down the street.

Zeya said the US is working with its allies to support a broad range of international investigations into atrocities in Ukraine.

Ireland’s Attorney General Paul Gallagher welcomed efforts over the last three months to support calls for justice in Ukraine, saying Ireland was one of 41 countries that quickly referred the situation in the country to the International Criminal Court.

Gallagher said the ICC has deployed a team of 42 investigators, forensic experts and support staff to investigate Russian crimes and support Ukrainian efforts.

Brutal fighting, but ‘some progress’ in Sievierodonetsk, says Zelenskyy

Ukrainian President Volodymyr Zelenskyy said the fighting was brutal in the eastern Donbas but there has been “some progress” in the city of Sievierodonetsk, where Russian forces have been tightening their grip. He said it was too early to give specifics.

“It’s the toughest there right now. As in the cities and communities nearby – Lysychansk, Bakhmut and others,” Zekenskyy said late Thursday in his nightly video address to the nation. “There are many cities where the Russian attack is powerful.”

Zelenskyy said Russian forces were mobilising people from areas of the Donbas that were already under their control and sending them into battle in the first line of attack, with Russian troops coming in behind them.

“The longer the war goes on, the more vile, shameful and cynical things Russia is forever inscribing in its history,” he said.

Zelenskyy said he was thankful to the United States for agreeing to send advanced rocket systems. “These weapons really can save the lives of our people and defend our land,” he said.

According to Zelenskyy, Ukraine is expecting deliveries of modern combat systems from other countries and noted that Sweden announced Thursday it was sending a new package of military assistance.

Some 60 percent of the infrastructure and residential buildings in Lysychansk, one of only two cities in the east still under at least partial Ukrainian control, have been destroyed from attacks, a local official said Thursday.

One of the most critical pathways for supplies and evacuations, the Bakhmut-Lysychansk highway, is still open but under constant bombardment.

Humanitarian supplies are still reaching the city, where shrapnel and mines dot the landscape, he said.

Lysychansk is separated by a river from the other city in the region that’s still under at least partial Ukrainian control, Sievierodonetsk. It, too, is under Russian siege.