Elite swimmer Mykhailo Romanchuk doesn’t know if his father was able to see him winning a medal for Ukraine at the swimming world championships.

Romanchuk’s father is fighting in the east of Ukraine, where pockets of resistance are still denying Russia full military control of the region almost four months after it unleashed its invasion.

“He’s in a hot spot and it’s a hard time,” Romanchuk said after taking bronze in the men’s 800-meter freestyle race in Budapest on Tuesday.

Romanchuk doesn’t dare talk to his dad out of fear his father’s location could be tracked through the call.

“It’s not possible for them to join the network because the Russians can search everything,” Romanchuk said. “But every morning he sends me (a message) that he is OK.”

The 25-year-old Romanchuk – who still intends to race the men’s 1500, then the 10K and 5K races in open water at the worlds – almost never made it to Budapest.

“My mind was to go to the war to defend my home,” said Romanchuk, who spent 10 days agonizing with his wife and family over the best course of action after Russia invaded his country on 24 February.

“We decided that I cannot do anything with the gun. For me, it’s better to continue training, to do everything that I do best,” said Romanchuk, who won bronze in the 800 and silver in the 1500 at the Tokyo Olympics last year. “With my swimming, I can tell all the world about the situation in Ukraine.”

As training facilities were destroyed by the war, Romanchuk was invited by German swimmer Florian Wellbrock – who finished second behind American Bobby Finke in the 800 – to come join him in Germany to train.

CDC warns of parechovirus in multiple states after infant…

Romanchuk and Wellbrock embraced after finishing 1-2 in qualifying for Tuesday’s race. But Finke’s strong finish prevented a repeat in the final. Romanchuk finished 0.69 seconds behind Finke. The top three all set national records.

Romanchuk said he was both “proud and disappointed” of his third place. He said his medal proves “that Ukrainians will fight to the end, it doesn’t matter what the situation.” 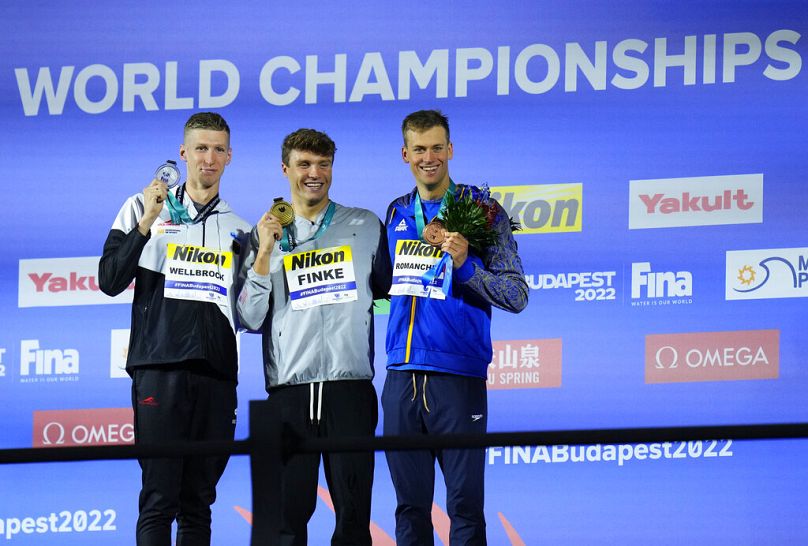 Swimmers from Russia and its ally Belarus have been excluded from the championships. Romanchuk said he doesn’t know how he would have reacted if they hadn’t been.

“My reaction could be maybe aggressive, I don’t know,” said Romanchuk, who referred to Olympic backstroke champion Evgeny Rylov appearing at a pro-war rally in Moscow. “Inside of me, I was ready to go and to kill him,” he said of Rylov. “But before he was a good friend. Before. But everything changed.”

Romanchuk spoke of the destruction Russia has caused in his country, the people killed, the lives shattered.

It makes it hard for him to focus on swimming.

“Especially in the beginning when I moved to Germany to join the group. It was hard because mentally you are in the war and you are sleeping just three or four hours because you are always reading the news,” Romanchuk said. “It was so hard in the beginning, but then you understand that all you can do is to swim, to train, to represent your country.”

For the freshly minted medalist, it’s a time to feel proud.

Biodiversity: UK is one of world’s most nature-depleted countries, new data…

Non-Hodgkin’s lymphoma: What is the cancer that Jane Fonda…

Sajid Javid says MPs should not use parliamentary office for…