personal belongings of victims and burnt-out vehicles after a rocket attack on the railway station in the eastern city of Kramatorsk, in the Donbass region on April 8, 2022.

The war in Ukraine is taking on a new dimension with growing evidence of human rights atrocities by Russian troops as they retreated from the Kyiv region and other parts of the north.

As Putin’s forces concentrate their offensive on eastern Ukraine, NATO has promised Kyiv more weapons and Western nations are tightening sanctions against Moscow.

Follow our latest updates from the war in our blog below, and watch TV coverage in the video player above.

Ukrainian authorities say a Russian rocket attack has struck a railway station at Kramatorsk in eastern Ukraine, killing at least 50 people including five children and wounding “over 100”. The station has been used by many evacuees in recent days and authorities say thousands were there at the time of the attack.Condemning Russia, President Zelenskyy described the attack as “evil”. The EU’s foreign policy chief Josep Borrell, travelling to Kyiv on Friday with Commission President von der Leyen, blamed Russia for an “indiscriminate attack” designed to “close escape routes” for those fleeing violence.Moscow has denied responsibility and suggested Ukraine was behind it.EU national representatives have agreed on a fifth package of sanctions against Russia that includes an embargo on Russian coal imports and a ban on Russian ships in EU ports.Volodymyr Zelenskyy has said the destruction in Borodyanka northwest of Kyiv is “more horrific” than Bucha, with even more victims as work begins to dig through the rubble after the Russian occupation.President Biden said the images out of Bucha and other areas of Ukraine as Russian troops withdraw are “horrifying” and “an outrage to our common humanity”.The EU has proposed to increase weapons contributions to Ukraine by €500 million to a total of €1.5 billion, Council President Charles Michel said on Thursday. NATO’s chief Jens Stoltenberg said the alliance was ready to provide more arms for Ukraine, without giving details. Ukraine’s Foreign Minister Dmytro Kuleba attending a NATO meeting in Brussels had called for ‘weapons, weapons and weapons”.German Chancellor Olaf Scholz has met UK Prime Minister Boris Johnson in London for talks expected to tackle Europe’s dependency on Russian energy in particular.United Nations countries voted 93-24 in favour of suspending Russia’s membership of the international body’s Human Rights Council as the world calls out Russian atrocities in Ukraine.

A Russian rocket attack killed dozens at a train station in Kramatorsk in eastern Ukraine which was used by evacuees in recent days.

“We do not know yet how many children were killed and injured in the attack, but we fear the worst,” said UNICEF Ukraine Representative Murat Sahin in a statement.

“Kramatorsk train station has been the main route out for thousands of families evacuating from Donetsk oblast, which has seen some of the war’s worst destruction, to relatively safer areas in Ukraine.”

According to local authorities, at least five children have been killed in the attack.

A curfew will be in effect from Saturday evening to Monday morning in Odesa, the Ukrainian port on the Black Sea, in the face of a “threat” of missile strikes, local authorities announced.

After the bombing of the Kramatorsk train station in eastern Ukraine, which left at least 50 dead, “a threat of a missile attack looms in Odesa on April 10, 2022. That’s why a curfew is imposed in Odesa and its region from 9 p.m. on April 9 until 6 a.m. on April 11, 2022,” the regional military administration said on Friday.

Coal, trucks, vodka and Putin’s daughters: Here’s our guide to what’s in the latest round of EU sanctions

Following two days of long and heated negotiations, EU countries have agreed to slap Russia with a new round of sanctions that, for the first time, directly targets energy supplies.

The sanctions package – the fifth in total since the war in Ukraine began – comes in response to the alleged indiscriminate killings of civilians in Bucha, a suburb near Kyiv.

The images of bodies strewn across the streets prompted an outpouring of international condemnation against the Kremlin, which continues to deny any responsibility in the massacre.

“To take a clear stand is not only crucial for us in Europe, but also for the rest of the world. A clear stand against Putin’s war of choice,” said Ursula von der Leyen, president of the European Commission, earlier this week.

The new set of penalties has been described as “massive” and “far-reaching” by EU officials but they present exemptions and loopholes that might blunt its effectiveness.

So what exactly is in the latest package?

Read the full Euronews guide to the latest round of EU sanctions here.

COVID-19: Which destinations are on green and amber lists…

The President of the European Commission Ursula von der Leyen arrived on Friday in Bucha, a small town northwest of Kyiv that has become a symbol of the atrocities of the war in Ukraine, according to an AFP journalist.

Von der Leyen, who is accompanied by the head of European diplomacy, Josep Borrell, travelled to Ukraine on Friday as a show of support for the country.

The two EU officials went to see the mass graves dug in Bucha to bury dozens of civilians killed in the fighting, AFP reported.

Russian coal will still be heading to Europe until at least August, says EU

The EU is planning to approve a total ban on Russian coal that would take effect from mid-August 2022 – but it’s a month later than initially planned.

The decision came after pressure was applied by Germany to delay the measure.

The phase-out of EU imports of Russian coal is the cornerstone measure in a fifth package of sanctions against Russia that the EU Commission proposed this week, as a reaction to civilian killings in the Ukrainian town of Bucha.

Once approved, it will be the EU’s first ban on any import of energy from Russia since the start of what the Kremlin calls its “special military operation” in Ukraine on 24 February.

Oil and gas, which represent far bigger imports from Moscow, are still untouched. 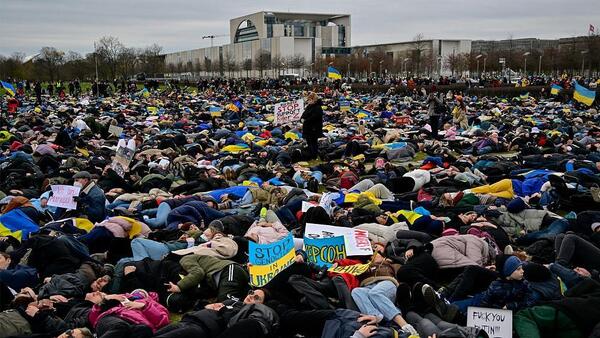 Pro-Ukrainian activists stage a “Die-in” during a protest under the slogan “Stop promising, start acting!” to call for an embargo on oil, gas and coal imports from Russia. – Copyright AFP16:10

The rocket attack that struck a railway station at Kramatorsk in eastern Ukraine killed at least 50 people including five children, Ukrainian authorities said.

They had previously said that at least 39 people had died including four children and more than 100 people were injured in the attack.

Russia announced on Friday that it would expel 45 Polish diplomats in retaliation for the expulsion of Russian diplomats from Poland at the end of March.

“Due to the principle of reciprocity, 45 employees of the Polish embassy and its general consulates in Irkutsk, Kaliningrad and Saint Petersburg have been declared persona non grata,” Russia’s ministry of foreign affairs said.

Several EU countries have recently expelled Russian diplomats accusing them of spying or posing a threat to national security.

In late March, Poland’s domestic counter-intelligence agency said that they had identified 45 individuals who were involved in Russian intelligence projects that posed a threat to Poland’s national security.

What do we know about the Kramatorsk train station attack?

The rocket attack that struck a railway station at Kramatorsk in eastern Ukraine killed at least “39 people including four children” and injured “over 100”, according to Ukrainian authorities.

There was swift condemnation from the Kyiv government and European politicians, none of whom were in any doubt as to who was to blame as they condemned Russia for targeting civilians.

Late on Friday morning, Ukraine’s state railway company said two rockets struck the station through which many Ukrainians had passed in recent days, fleeing the conflict zone in the Donbas region.

“Two rockets hit Kramatorsk railway station,” Ukrainian Railways said in a statement, adding that according to “operational data… more than 30 people were killed and more than 100 were wounded”.

Read the full story about what we know about the attack here.

Antioxidants in red wine, berries may slow progression of…

Ukraine ‘99.9%’ sure Russia behind massive cyber…