A child looks through a window of a bus carrying refugees fleeing the conflict from neighbouring Ukraine in the border town of Przemysl, Poland

The Ukrainian people deserve EU membership, President Volodymyr Zelenskyy said in a defiant and emotional address on Saturday, as at least 120,000 citizens of the country undergoing a Russian invasion are reported to have sought refuge in neighbouring countries.

UNHCR reported that the number might go up to as high as 4 million people, as most Ukrainians trying to escape war are now heading to Poland, Moldova, Hungary, Romania and Slovakia.

Earlier on Saturday, Zelenskyy issued a defiant message to his people in a separate address.

CDC data shows omicron accounts for 99.9% of new cases as…

Zelenskyy refused a US offer to help him leave the city amid growing signs that Russia wanted to overthrow his government.

Several Ukrainian cities, including Kyiv, have seen a heavy night of fighting, forcing thousands of civilians to take shelter in basements and the city’s metro system.President Volodymyr Zelenskyy asked the EU to decide on Ukraine’s potential membership in the bloc, calling for countries to also rally around revoking Russia’s access to SWIFT.Zelensky earlier refused the US offer to help him leave Kyiv ahead of a Russian takeover.The Ukrainian military has claimed to have pushed back Russian forces at several points, including the main thoroughfare of Kyiv’s Victory Avenue.The Russian military claims to have captured a key airport after seizing control of the Chernobyl nuclear plant and destroying dozens of Ukrainian military facilities.Neither countries’ latest military claims have been independently verified.Ukraine says 198 of its civilians have been killed and more than 1,000 injured since Russia’s invasion began.Nearly 120,000 Ukrainians have fled, says UNHCR. Poland refuses World Cup qualifying match against Russia over Ukraine invasion.

Scholz: Germany is sending in weapons to help Ukraine

Germany will deliver a thousand rocket launchers and 500 Stinger surface-to-air missiles to Ukraine “as soon as possible” to help it cope with the Russian army’s invasion, the government announced on Saturday.”The Russian aggression against Ukraine marks a change of era, it threatens the established order since the post-war period,” Chancellor Olaf Scholz said in a statement.”In this situation, it is our duty to help Ukraine as much as we can to defend itself against Vladimir Putin’s invading army.”19:00

The football federation heads of the two countries announced that neither is willing to play against Russia in the upcoming qualifiers in response to its invasion of Ukraine.

Polish soccer federation president Cezary Kulesza said it was in talks with other federations to present a unified position to FIFA, responsible for the March 24 game in Moscow.

“No more words, time to act!” Kulesza wrote on Twitter, adding the move was prompted by the “escalation of the aggression.”

Sweden, a potential opponent of Russia in next month’s playoffs, later joined Poland in declaring its national team would not play a match against the Russians regardless of where it takes place.

“The illegal and deeply unjust invasion of Ukraine currently makes all football fixtures with Russia impossible,” said Karl-Erik Nilsson, the Swedish federation’s chairman. “We therefore urge FIFA to decide that the playoff matches in March in which Russia participates will be canceled.”

The Ukrainian embassy in Israel has called on “compatriots, brothers and all caring citizens of Israel and other countries who are currently in Israel” to consider volunteering for the war effort in Ukraine on Saturday.The appeal is considered to be directed towards a significant Ukrainian diaspora community in the country. Earlier, Ukrainian President Volodymyr Zelenskiy asked Israeli Prime Minister Naftali Bennett to mediate in a possible diplomatic setting with Russia on Friday.17:56

What is it like to wake up in the morning to the sound of explosions?

“We were ready for this — as much as one can be ready for a war. But we thought until the last moment that Putin wouldn’t do it,” one citizen of the Ukrainian capital told us. 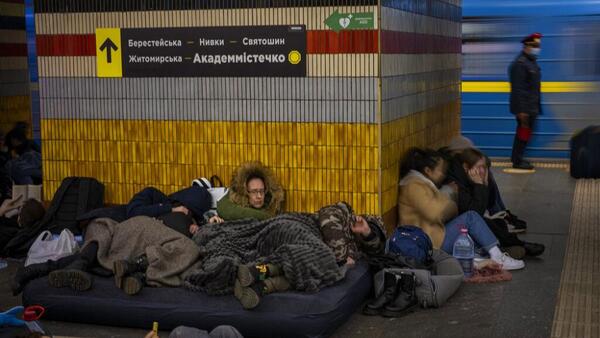 US intelligence: Half of Russian border troop build-up now in Ukraine

The US estimates that more than 50% of Russian combat power arrayed along Ukraine’s borders has entered the country — a number that is up from earlier evaluations on Friday, claiming that about one-third of the Russian force had been committed to the fight.

A US intelligence official who shared the information with the press would not say how many Russian troops that amounts to.

The official said advancing Russian forces were roughly 30 kilometres outside Kyiv as of Saturday, and that an unspecified number of Russian military “reconnaissance elements” had entered the capital.

Meanwhile, Britain’s Ministry of Defence said on Saturday that “the speed of the Russian advance has temporarily slowed likely as a result of acute logistical difficulties and strong Ukrainian resistance.”

“Russian forces are bypassing major Ukrainian population centres while leaving forces to encircle and isolate them,” the ministry said in statement.

The city authorities have imposed a curfew on all residents of Kyiv throughout the weekend, saying that anyone seen walking around the city will be considered to be a “saboteur”.

Our international affairs reporter Valérie Gauriat is reporting live from Kyiv with the latest update on the situation in the Ukrainian capital.

At the Siret border crossing between Ukraine and Romania, there’s a warm welcome waiting for anyone fleeing the Russian invasion. “The feeling is like you are in a train station” says Euronews reporter Claudiu Popa.”Everybody is coming, everybody is leaving, everybody is going somewhere” he says. The United Nations High Commission for Refugees estimates 120,000 Ukrainians have fled the country since Thursday, with many countries in the region preparing for an influx of people. “In the past couple of hours we have seen hundreds of refugees. They enter Romania either by car or walking with their own luggage” says Popa who describes a welcoming committee of Romanian authorities, NGOs, church groups and private citizens waiting to meet them. “From the very first moment they pass the border somebody is starting to ask are you thirsty, do you need anything, would you like some free accommodation here in the county, or do you need to get to the capital, to Bucharest? Would you like something to drink, something to eat, would you like some small toys for your children.” There are first aid tents available to treat any refugees with medical issues, as people drive or walk over the border with whatever luggage they’re able to carry. Most people, says Euronews reporter Claudiu Popa, don’t want to stay in the area. Their final destinations are Lithuania, Germany, Poland or Italy. “There are a few people that decide to stay here for a night or a couple of nights, and there are lots of offers of accommodation.” 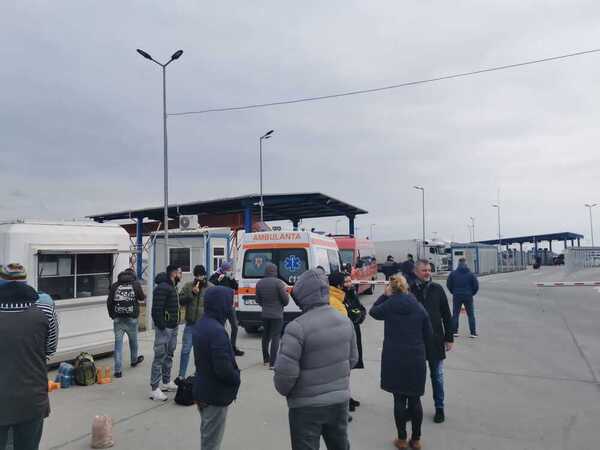 As the Russian invasion of Ukraine continues on the third day of the war, citizens worldwide gather in anti-war protests to protest the actions of the Kremlin.

In the French capital, thousands have gathered at the Place de la République in a show of solidarity with the Ukrainian people.

Parisians rally in support of Ukraine

Facebook Watch🔴 LIVE | People gather in the Place de la République in Paris to show their solidarity for Ukraine as Russia continues its assault.15:59

The Swedish government is calling for a complete ban on Russia from all sports competitions, in retaliation for the invasion of Ukraine.

Stockholm wants to convince the other EU countries of a “boycott of sporting links” with Russia “as long as the invasion of Ukraine lasts” Minister of Sports Anders Ygeman said in a statement.

“The most important thing is that Russia’s aggression stops. If the EU decided on a sporting boycott, it would help achieve this goal.”

The minister is proposing a boycott of all competitions planned in Russia and wants to stop all Russian athletes participate in competitions on European soil.

There have already been several sanctions imposed on Russian sports as a consequence of the invasion of Ukraine. The UEFA Champions League Final will be moved from St. Petersburg to Paris, while the F1 Grand Prix scheduled for Sochi in September has already been canceled.

The Norwegian and Swedish ski federations announced on Saturday that Russian athletes were not welcome for the events scheduled in those countries during the next month.

And Poland has announced it will not play against Russia in a World Cup qualifier match in Moscow.

Ukraine war live updates: Zelenskyy says fighting back ‘the most…