This satellite image taken by Planet Labs PBC shows smoke rising at the Azovstal steelworks in Mariupol, Ukraine, Wednesday, May 4, 2022.

Fresh attempts to evacuate civilians from Mariupol were underway on Wednesday, the day after more than 100 arrived to Ukrainian-held territory and relative safety.

The European Commission has proposed a new raft of sanctions against Moscow, including a ban on Russian oil imports.

Follow the latest updates in our live blog below, and watch Euronews TV coverage in the video player above.

The mayor of Mariupol told national TV that contact had been lost with the last Ukrainian fighters at the Mariupol steel plant after heavy fighting. Hundreds of civilians including more than 30 children are thought to be trapped.Evacuations from Mariupol resumed on Wednesday, the regional governor said. Earlier, President Zelenskyy confirmed that 156 civilians evacuated from the city had arrived in Ukrainian-controlled Zaporizhzhia. European Commission President Ursula von der Leyen has unveiled a proposal to impose an EU-wide ban on Russian oil imports, in a speech to the European Parliament.The plan, to be put to EU27 governments, is opposed by Hungary and Slovakia, highly dependent on Russian oil. Budapest says it regrets the lack of an energy security “guarantee”.A Russian state aircraft violated Finnish airspace, Finland’s ministry of defence said in a statement.Moscow has said Western arms shipments to Ukraine are legitimate targets. Its attacks on Tuesday included strikes on key infrastructure such as railways and power plants. Ukraine says there were dozens of casualties.Towns and cities hit on Tuesday included Lviv, Vinnytsia and Kirovograd in central Ukraine, and Odesa in the south. Russia claims “Israeli mercenaries” are fighting in Ukraine alongside the Azov regiment, further fueling a diplomatic row between the two countries.An AP investigation estimates that 600 people died in a Russian strike on a Mariupol theatre in March.

Air raid sirens sounded in cities across Ukraine on Wednesday night and missile fire followed shortly after in the cities of Cherkasy, Dnipro and Zaporizhzhia.

In Dnipro, Mayor Borys Filatov said one strike hit the centre of the city. The strikes in Dnipro also hit a railroad facility, authorities initially said, without elaborating. Ukrainian Railways said none of its staff were injured in the Dnipro attack.

Complaining that the West is “stuffing Ukraine with weapons,” Russia bombarded railroad stations and other supply-line points across the country. Meanwhile, the European Union moved to further punish Moscow for the war by proposing a ban on oil imports, a crucial source of revenue for Russia.

Ambassadors of EU countries are currently discussing the European Commission’s proposal to impose a gradual and “orderly” EU-wide ban on Russian oil imports.

Commission President Ursula von der Leyen unveiled the long-awaited measure on Wednesday morning and said member states will have six months to phase out crude oil and until the end of the year to stop buying refined oil products from Russia.

But the proposal, the most radical yet since the Ukraine war broke out, is becoming a source of great friction among national representatives. The main point of contention is the timeline envisioned by the Commission. Initially, Hungary and Slovakia, two countries highly dependent on Russian oil, were supposed to be granted an extra year, until the end of 2023, to complete the phase-out.

But Hungary has said it cannot support the ban in its current form because the country won’t be able to secure alternative suppliers to fill the gap left by Russian pipeline oil. According to diplomatic sources consulted by Euronews, Slovakia is now pushing for a December 2024 deadline to complete the phase-out, two years later than what von der Leyen announced.

Bulgaria, which last month saw how Gazprom cut off its gas supplies, has also raised concerns and is asking for a similar exemption.

Meanwhile, a group of coastal states, including Cyprus, Malta, Greece, the Netherlands and Belgium, are asking the Commission to come up with a cost-benefit analysis to determine how much economic damage their local shipping industries could sustain as a result of the EU ban. Most Russian oil is traded via ships from Russia to Europe and other regions.

The discussions between EU Ambassadors are shaping up to be the most consequential, lengthy and fraught since the start of the conflict. Sanctions require the unanimous approval of all 27 member states.

Finland’s prime minister said she hopes that the NATO ratification process is “as short as possible” if her country decides to apply to the military alliance.

“If Finland, and Sweden would decide to apply for NATO membership, the key issue is to keep the process, the ratification process as short as possible,” said Sanna Marin on Wednesday.

“I think it’s (in) everybody’s interest, that different countries will move as fast as possible. That would be the best security guarantee that we could have.”

She added that there were discussions with NATO member states on “what kind of security guarantees or security issues” they could have if they choose to apply.

European Union member states that are refusing to put in place an embargo on Russian oil will be “accomplices” in war crimes, Ukrainian Foreign Minister Dmytro Kuleba said on Wednesday.

“If a country in Europe continues to oppose an embargo on Russian oil, then there will be good grounds to say that this country is complicit in the crimes committed by Russia on Ukrainian territory,” Kuleba said in a live video on Twitter.

Earlier on Wednesday, Hungary rejected the EU’s proposal to embargo Russian oil “in its current form”.

Ukrainian President Volodymyr Zelenskyy says his country could not accept a deal with Moscow that would allow Russian troops to remain in occupied territory.

Speaking Wednesday to participants in the Wall Street Journal CEO Council Summit, Zelenskyy said Ukrainian forces had halted the Russian offensive in what he described as the first stage of the conflict. In the second stage, he said, Ukraine would expel Russian troops from its territory and in the third, would move to fully restore its territorial integrity.

Zelenskyy said he would not accept a cease-fire deal that would allow Russian forces to remain in their current positions ‒ insisting that “we will not accept a frozen conflict” ‒ but gave no further details. He warned that Ukraine would be drawn into a “diplomatic quagmire” like the peace agreement for eastern Ukraine that was brokered by France and Germany in 2015.

In 2014, Russia annexed Ukraine’s Crimean peninsula and cast its support behind a separatist rebellion in Ukraine’s eastern industrial heartland called the Donbas. Russian President Vladimir Putin has named Ukraine’s recognition of the Russian sovereignty over Crimea and its acknowledgement of the separatist regions’ independence as key conditions for halting hostilities.

Zelensky emphasised that Putin must agree to meet him to negotiate any deal to end the fighting.

He said it was important to continue peace talks, but noted that “until the Russian president signs it or makes an official statement I don’t see the point in such agreements.”

Hungary on Wednesday rejected the proposal for a gradual European embargo on Russian oil “in its current form”, judging that such a measure would “completely destroy the energy security” of the country.

The Brussels project “cannot be supported in its current form. With all responsibility, we cannot vote for it,” said foreign minister Peter Szijjarto said in a video message posted on his Facebook page.

A government spokesman had said earlier in the day that they did not “see any plans or guarantees on how a transition could be managed based on the current proposals, and how HU’s energy security would be guaranteed.”

A Russian state aircraft violated Finnish airspace, Finland’s ministry of defence said in a statement, as the country is set to decide on a possible NATO candidacy.

The ministry said the breach was on its eastern border near Russia. A spokesman told AFP that the aircraft was a Mi-17 helicopter.

It is the second time in a month that Finland has said a Russian aircraft entered its airspace. On April 8, a civilian transport aircraft belonging to the Russian army also briefly entered Finnish airspace.

Experts have warned that Russian intimidation is to be expected against Finland and Sweden, as the two countries consider joining NATO to better protect themselves from Moscow.

Four Russian fighter planes had violated Swedish space in early March. On Friday evening, a Russian reconnaissance plane also crossed the air border near a naval base in the south of the country.

Russia’s foreign ministry announced sanctions against 63 Japanese officials, journalists and professors for engaging in what it called “unacceptable rhetoric” against Moscow.

The list includes the prime minister Fumio Kishida as well as the Japanese foreign and defence ministers and will ban the individuals from travelling to Russia.

An image shot by Planet Labs PBC at dawn Wednesday showed black smoke rising at one side of the plant near a canal.

Buildings at the steelworks, including one under which hundreds of fighters and civilians are likely hiding, showed large, gaping holes in their roofs.

Meanwhile, another photo showed a recent Russian missile attack tore a hole in a key bridge near Odesa.

Russia has attacked the bridge three times. Though it is still standing, a chunk of the bridge is missing toward its south end, the image shows. (AP) 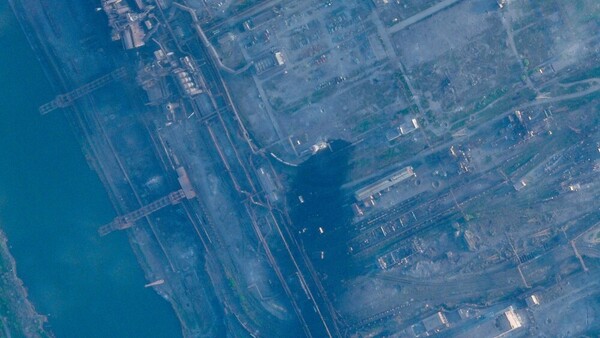 For a summary of Tuesday’s developments in the war, click here.

New Jersey Woodbridge Township finds no link to cancers among…

‘Loud bang’ heard in London and Hertfordshire was sonic…