A mass grave is seen behind a church in the town of Bucha, northwest of the Ukrainian capital Kyiv on April 3, 2022.

There’ve been calls for an international probe into alleged Russian atrocities against civilians as Vladimir Putin’s forces retreated from the Kyiv region.

The war has deepened the rupture between Russia and the West, where there are calls for more sanctions against Moscow.

Watch our TV coverage in the video player above, and follow the latest updates in our live blog below:

EU and UK leaders have evoked further sanctions against Moscow in the wake of mounting evidence of Russian atrocities against civilians amid the withdrawal from the outskirts of Kyiv.The Polish and Spanish prime ministers, speaking separately, have echoed the Ukrainian president’s allegations of “genocide”, urging an international investigation. France’s President Macron says there’s clear evidence of Russian war crimes.Volodymyr Zelenskyy says a special justice unit will be set up to investigate Russian crimes in Ukraine, involving national and international investigators, prosecutors and judges.Ukraine’s prosecutor-general says the bodies of 410 civilians have been removed from Kyiv-area towns that were recently retaken from Russian troops.Zelenskyy appeared in a video at the Grammy Awards asking for support in telling the story of Ukraine’s invasion by Russia. In another video he slammed former German and French leaders Angela Merkel and Nicolas Sarkozy for their “policy of concessions to Russia”.Germany’s defence minister says European officials should talk about halting gas supplies from Russia. Lithuania said on Sunday it is the first EU nation to cut itself off entirely from gas imports from Russia.Hungary’s newly re-elected leader Viktor Orban, who has refused arms shipments to Ukraine across Hungarian territory, listed Brussels and Zelenskyy among his enemies in a victory speech.The Ukrainian military says its forces have retaken some towns in the Chernihiv region and that humanitarian aid is being delivered.Russia has described the images from Bucha as a Ukrainian “hoax”. Moscow asked for a special meeting of the UN Security Council but the UK that currently chairs it refused to convene it.

Germany to expel “a large number” of Russian diplomats

Germany has become the latest country to expel Russian diplomats in connection with the war in Ukraine.

Foreign Minister Annalena Baerbock said on Monday “a large number” would be ordered back to Moscow, with the AFP news agency reporting 40 diplomats are involved.

Baerbock stressed that the expelled Russian diplomats constituted “a threat to those who seek protection with us”. Germany is hosting more than 300,000 Ukrainian refugees who have fled the fighting in their country-

“We will not tolerate it any longer” she added in a short written statement.

The diplomats facing deportation are suspected by German authorities of working for Russian intelligence services and now have five days to leave Germany, AFP has learned.

This decision by Germany comes hours after Lithuania, expelled the Russian ambassador to Vilnius. Since the start of the invasion of Ukraine, dozens of Russian diplomats have been expelled from countries in Europe and the US.

Two-thirds of Russian troops have left region around Kyiv

Two-thirds of the Russian forces that had occupied the area around Kyiv since the start of the invasion have retreated to Belarus, a senior Pentagon official said on Monday, saying it is likely that there will be a reorganisation of troops ahead of an assault elsewhere in Ukraine.

The senior official said about a third of the forces Russia had deployed remained and that they were now reorganising in Belarus.

The official, who requested anonymity, said they continue to think the Russian forces will re-equip, re-supply and then be sent back to Ukraine to fight elsewhere.

He warned that they could be sent to the eastern Donbas region, though the troops have not yet started to move.

As pressure mounts for further sanctions against Russia, European importers are still paying hundreds of millions of euros for Russian oil and natural gas every day.

Europe gets around 40% of its natural gas from Russian and 25% of its oil. Russia supplies some 14% of diesel, S&P Global analysts said, and a cutoff could send already high prices for truck and tractor fuel through the roof.

With production declining in Europe, the bloc is now more dependent on imports.

Currently, there isn’t the infrastructure to get natural gas supplies to places in Germany and eastern Europe that are heavily dependent on it.

Lithuania announced on Saturday that they were no longer dependent on Russian gas — a move that they were able to do after building an LNG terminal in 2014.

Germany, the continent’s biggest economy, still gets 40% of its gas from Russia, even after cutting its reliance. Estimates vary about what a ban on Russian energy would do to the European economy.

“We will likely continue to see resistance from Germany and a select few others as they’re simply far more reliant on Russian imports of oil, gas and coal,” said Craig Erlam, senior markets analyst for the U.K., Europe, Middle East and Africa at currency broker Oanda.

Economists Simone Tagliapietra and Guntram Wolff at the Bruegel think tank in Brussels propose an EU import tariff on Russian oil and gas. That would reduce Russia’s revenue while avoiding a major hit to Europe’s growth, with the legal advantage of leaving contracts intact.

While the army that invaded Ukraine is already paid for, the tariff would put the Kremlin in “a more difficult economic position, in which they might possibly start having difficulties buying stuff from the outside world, including armaments, and paying the salaries of the public sector,” Tagliapietra said. “All this will happen in months, but can have strong effects on the sustainability of Russian domestic politics.”

Sweden and Finland are the last two Nordic or Baltic countries which are not members of the NATO military alliance but that is changing rapidly as both countries look likely to seek membership in the next few months. 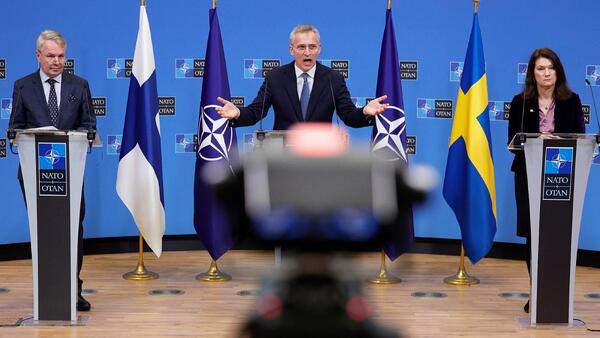 US President Joe Biden said on Monday that he wants a “war crimes trial” after the discovery of numerous bodies wearing civilian clothes in Bucha, near Kyiv.

The US president said again that he considered his Russian counterpart Vladimir Putin a “war criminal” and called him “brutal”.

“He has to be accountable,” he said.

Meanwhile a Russian law enforcement agency says it has launched its own investigation into allegations that Ukrainian civilians were massacred in Bucha, focusing on what it calls “false information” about the actions of Russian forces.

The Investigative Committee claims Ukrainian authorities made the allegations “with the aim of discrediting Russian troops” and that those involved should be investigated over possible breaches of a new Russian law banning what the government deems to be false information about its forces.

Russian law enforcement has launched several investigations since Russian troops entered Ukraine, typically into incidents such as the shelling of areas held by Russia-backed separatists.

The Lithuanian Foreign Ministry said on Monday that it’s ordered the expulsion of the Russian ambassador, following the invasion of Ukraine and because of atrocities committed by Russian soldiers.

“Lithuania is lowering the level of diplomatic representation with Russia, this way expressing its full solidarity with Ukraine and the Ukrainian people, who are suffering from Russia’s unprecedented aggression” Lithuanian Foreign Minister Gabriel Landsbergis said in a statement.

The Lithuanian Government has also decided to close the Consulate General in Klaipėda, and recall its own ambassador from Moscow.

“What the world has seen in Bucha, unfortunately, may only be the beginning. With other liberated cities, we may see more horrific examples of war crimes. All war crimes and crimes against humanity committed by the Russian armed forces in Ukraine will not be forgotten” Landsbergis said.

Ukrainian President Volodymyr Zelenskyy visited the town of Bucha near Kyiv on Monday, where he denounced Russian army “war crimes” he said would be “recognised as genocide.”

Zelenskyy was heavily guarded by soldiers as he surveyed the devastation of the town, which was recently taken back by the Ukrainian military.

“Every day, when our fighters enter and take over territories, you see what happens” said Zelenskyy.

“These are war crimes and it will be recognized by the world as genocide”, he added, referring to “thousands of people killed and tortured, with extremities cut off, women raped, children killed”.

Ukraine accuses the Russian army, which invaded the country, of having committed a “massacre” in Bucha .

This small town northwest of Kyiv was occupied by the Russian army on 27 February, and remained inaccessible for more than a month.

Reporters from the AFP French news agency counted the bodies of at least 22 people in civilian clothes in the streets on Saturday. One of them was lying near a bicycle and another had shopping bags next to her. A corpse had its hands tied behind its back.

The cause of their death could not immediately be determined, but two people had large head wounds.

According to the city’s mayor, Anatoly Fedorouk, nearly 300 people were buried in “mass graves” in Bucha.

The graphic images and stories emerging from the surviving residents of Bucha have sparked an international outcry, with the promise of new sanctions against Russia.

Moscow has denied killing civilians in Bucha. Russian Minister of Foreign Affairs Sergei Lavrov called it “falsifications” staged for the benefit of the press.

The European Union is “urgently” discussing new sanctions against Moscow, after the discovery of a large number of civilian bodies in the Kyiv region, the bloc’s foreign affairs chief said on Monday.

The EU “condemns in the strongest terms the reported atrocities committed by Russian armed forces in several occupied Ukrainian towns, which have now been liberated” Josep Borrell said in a statement.

A new set of sanctions is under discussion between the 27 member states, but it needs to be agreed unanimously before any new measures are adopted.

Earlier on Monday French President Emmanuel Macron said fresh sanctions could include be placed on “coal and oil” but didn’t mention gas purchases — a subject that has divided some EU countries.

German Chancellor Olaf Scholz had also called for new sanctions on Sunday after the discovery of the bodies of civilians in Bucha, near Kyiv, murders attributed to the Russian army which he described as “war crimes”.

Berlin still rules out hitting the Russian gas sector. “We must consider tough sanctions, but in the short term Russian gas supplies are not substitutable” and interrupting them “would harm us more than Russia,” German Finance Minister Christian Lindner said before a meeting with his EU counterparts on Monday in Luxembourg.

Asked about the possibility of sanctions on coal and oil, Mr Lindner kicked into touch. “No speculation on my part,” he replied.

“Austria is not in favor of gas sanctions. We are very dependent on Russian gas in Austria. Sanctions should not affect us more than Russia,” said Austrian Finance Minister Magnus Brunner.

Foreign ministers from five Arab countries have arrived in Moscow for talks.

The Secretary-General of the Arab League, Ahemd Abdoul Gheit, will also be joining the meeting.

After Monday’s talks in Moscow, the ministers will travel to Poland on Tuesday for a meeting with Ukraine’s Foreign Minister Dmytro Kuleba.

Amy Schumer reveals struggling with a disorder called trichotillomania: What is it?

Patients with brain fog after COVID-19 have abnormalities in…