Soldiers pictured at a military airport in Mielec in southeastern Poland.

Online misinformation about the armies of Poland and Finland has circulated online amid Russia’s invasion of Ukraine.

Social media users have falsely suggested that both European Union member states are preparing to enter the war or engage in military conflict.

Investigations by Euronews and other independent fact-checkers have revealed that the claims are false and alleged video evidence has been taken out of context.

In times of conflict and crisis, when people are hungry for details about the war, misinformation can be equally as viral as verified facts.

Both Moscow and Kyiv have used social media to spread their propaganda, while pro-Kremlin users have also spread false claims.

Debunking the most viral misinformation about Russia’s war in UkraineThe Disinformation War: The falsehoods about the Ukraine invasion and how to stop them spreading

Poland is NOT preparing to invade Ukrainian territory

A recent viral video has falsely claimed that Poland is preparing to send troops into Western Ukraine to confront Russia.

The footage — which includes the logo and branding of BBC News — alleges that Poland’s military general Yaroslav Mika had signed an order to put army sections on “full alert”.

The video was shared online by users in a number of languages, including Czech, French, Italian, Polish, Russian, and Turkish.

But online searches show no record of the BBC ever producing a report on the story, and senior disinformation journalists at the company state that the video is “fake”.

The branding of the BBC was also previously used to spread false claims about military strikes on a Kramamtorsk railway station that killed dozens of people. 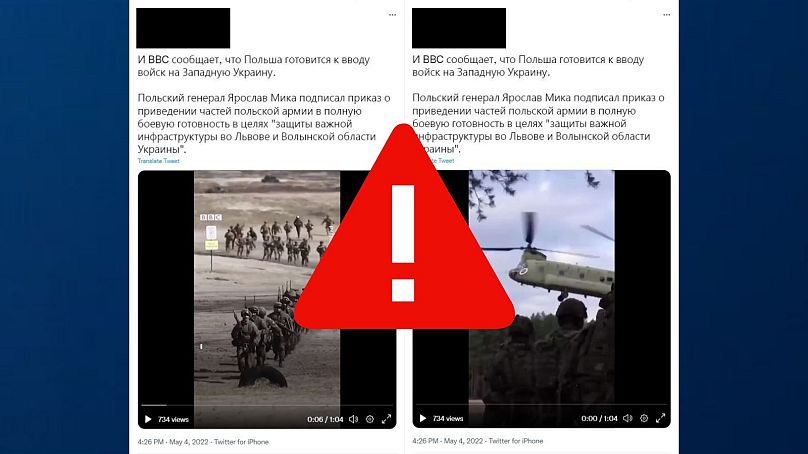 The 1-minute video falsely claims Poland is moving soldiers towards Lviv in western Ukraine.Euronews via Twitter

Poland has led calls for the EU to toughen sanctions on Russia and for the NATO alliance to arm Ukraine during the war.

While Poland has provided its neighbour with military aid, it has not expressed any such plans to send troops into Ukrainian territory.

The General Command of the Polish Armed Forces dismissed the allegations and stated that any alleged order to move troops was “counterfeit”.

“This is a false order of the Polish General Staff, the whole document is fake,” its official Twitter account said.

Kremlin spokesperson Dmitry Peskov said on Friday that hostile rhetoric was coming out of Poland and suggested that Warsaw could be “a source of threat”.

“The fake order of the Polish general, created for propaganda purposes, was used for disinformation activities against Poland,” said Stanisław Żaryn, a spokesman for Poland’s Special Services Ministry.

“The order was used to legitimise insinuations about Poland’s plans to attack western Ukraine,” he said on Twitter.

“[These] are all elements indicating that Russia is conducting a coordinated information operation against Poland.”

Warsaw says it has recently stepped up efforts to combat the spread of “disinformation” being spread by Russia.

Finland has NOT sent army tanks to the eastern Russian border

Another viral video has prompted false claims that Finland is preparing to escalate tensions near its 1,340-kilometre border with Russia.

The footage shows a freight train carrying dozens of tanks and military equipment across a railway bridge through a city.

Social media users have alleged that the tanks are being transported toward eastern Finland and the Russian border.

The video was widely shared on Facebook, Twitter, and Telegram and has gained hundreds of thousands of total views.

But Finland’s Defence Forces have stated that the claims are “not true” and that the equipment is moving away from Russia’s border. 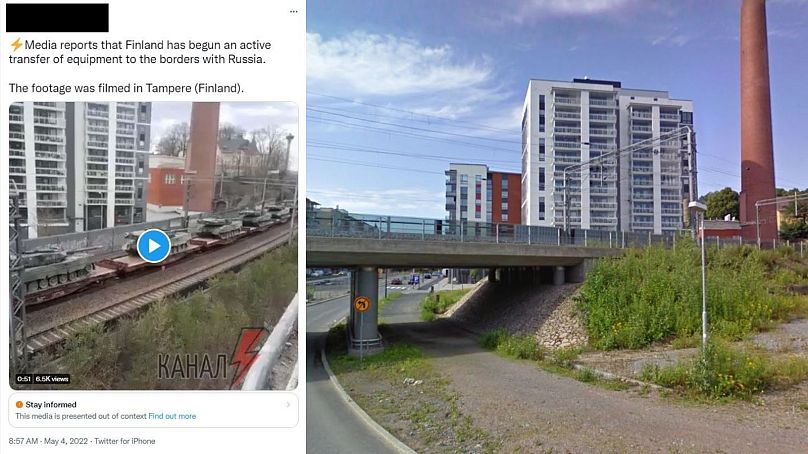 The video shows a train travelling from east to west through the city of Tampere in Finland.Euronews via Twitter/Google

In a statement, the authority said that the tanks were heading towards an annual two-week military exercise in western Finland.

“The Armoured Brigade will lead the Army mechanised exercise Arrow 22 at Pohjankangas Niinisalo and in Säkylä,” the Defence Forces said.

“The exercise will involve around 150 armoured vehicles and up to 300 other military vehicles,” it added. “Tracked vehicles will be transported by train and by equipment transporters to the exercise area.”

Matching the video with images on Google, Euronews found that the video was taken in the city of Tampere. The footage shows that the train is moving westwards, towards the villages of Niinisalo and Säkylä.

Visting armies from the UK, Latvia, the USA and Estonia are also expected to participate in the planned military exercises, alongside more than 3,000 Finnish soldiers.

Russia threatens military build up if Finland or Sweden join NATOWatch: Sweden and Finland are moving closer to NATO. But what are the steps to join?NATO chief says Finland and Sweden could join ‘quickly’ as both warm to membership

Russia’s invasion of Ukraine has led both Finland and Sweden to send assault rifles and anti-tank weapons to Kyiv, breaking their policy of not providing arms to countries at war.

The two EU countries have also been mulling NATO membership, despite warnings from Moscow.

Russia has threatened to reinforce its presence in the Baltic Sea if either Finland or Sweden were to join the alliance.

Davos 2022: What to expect from the World Economic Forum’s most…