This satellite image provided by Maxar Technologies on Monday, March 21, 2022 shows the damaged Mariupol Drama theatre, top centre, and the area around it in Mariupol, Ukraine

Authorities in the Ukrainian city of Mariupol say they fear that up to 300 people were killed in the 16 March Russian bombing of a theatre.

US President Joe Biden is in eastern Poland visiting US troops and seeing the humanitarian response to the influx of Ukrainian refugees.

The head of the Russian army has hinted at a shift in strategy, saying the war effort will now focus on eastern Ukraine.

US President Joe Biden has travelled to Rzeszow in Poland close to the border with Ukraine as the country hosts more than two million refugees.About 300 people were killed in the Russian airstrike last week that blasted open a Mariupol theatre, authorities said.Russia’s army chief has said its main war effort will now focus on the Donbas region of eastern Ukraine, having mostly accomplished first phase objectives.The EU and US struck a major deal to reduce European reliance on Russian natural gas.President Volodymyr Zelenskyy thanked European Union leaders but said that sanctions and support for Ukraine had come “a little late”.Russia has acknowledged that 1,351 of its troops have died in the past month of the war in Ukraine. NATO’s earlier estimate was much higher, at around 7-15,000.Ukraine has re-occupied towns up to 35 kilometres east of Kyiv, the UK Ministry of Defence says.Civilians are starving in Mariupol, the city council said, emphasising that “more and more people are left without any food supplies” in the port city that has been under siege since early March.Dozens of Ukrainian officials, journalists and activists opposed to Moscow’s invasion have been arbitrarily detained by Russian forces or have disappeared, the UN said on Friday, saying some cases amounted to “hostage taking”.

“And the goals are not hidden,” he continued. “They are declared publicly — to destroy, break, annihilate, strangle the Russian economy and Russia on the whole.” 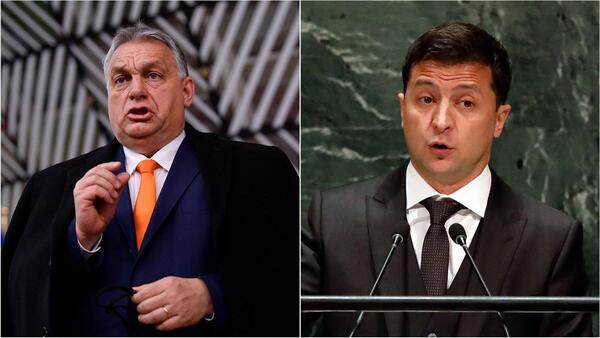 Orban has let NATO troops be stationed in the country but banned the shipment of weapons and other lethal equipment to Kyiv.

Russia’s defence ministry says its strategy will focus on completely “liberating” eastern Ukraine’s Donbas region, following the first phase of its military operation in Ukraine which it says is mostly complete.

Live: EU leaders turn their attention to the cost of living…

The defence ministry said Russian-backed separatists now controlled 93% of Ukraine’s Luhansk region and 54% of the Donetsk region – the two areas that jointly make up the Donbas.

“The main objectives of the first stage of the operation have generally been accomplished,” Sergei Rudskoi, head of the Russian General Staff’s Main Operational Directorate, said.

“The combat potential of the Armed Forces of Ukraine has been considerably reduced, which … makes it possible to focus our core efforts on achieving the main goal, the liberation of Donbas.”

The announcement has been interpreted as a possible move to more limited goals after Putin’s forces ran into fierce Ukrainian resistance in the first month of the war. But Defence Ministry spokesman Igor Konashenkov said the “special military operation” would continue “until all objectives are achieved”.

Rudskoi also described as a “big mistake” the delivery of arms to Kyiv by Western countries. “It prolongs the conflict, increases the number of victims and will have no influence on the outcome of the operation,” he declared.

(with Reuters and AFP)

About 300 people were killed in the Russian airstrike last week that blasted open a Mariupol theatre, Ukrainian authorities said Friday in what would make it the war’s deadliest known attack on civilians yet.

In a vain attempt to protect the hundreds of people taking cover inside the theatre, “CHILDREN” in Russian had been printed in huge white letters on the ground in two places outside the grand, columned building to make it visible from the air.

Citing the accounts of those who were there at the time of the blast, Mariupol City Council made the claim on Friday morning.

“Unfortunately, we start this day with bad news,” the council said on its Telegram channel. “From eyewitnesses, information appeared that about 300 people died in the drama theatre of Mariupol as a result of a bombardment by a Russian aircraft.

“But the words of those who were inside the building at the time of this terrorist act say otherwise.”

It was not immediately clear whether emergency workers had finished excavating the ruins of the Mariupol Drama Theatre or how witnesses arrived at the figure.

The scale of devastation in Mariupol, where bodies have been left unburied amid bomb craters and hollowed-out buildings, has made information difficult to obtain.

But soon after the attack, the Ukrainian Parliament’s human rights commissioner said more than 1,300 people had taken shelter in the theatre, many of them because their homes had been destroyed. The building had a basement bomb shelter, and some survivors did emerge from the rubble after the attack. (with AP)

Biden in Poland to see US troops and Ukraine refugees

President Joe Biden has visited US troops stationed near Poland’s border with Ukraine and is also getting a first hand look at the growing humanitarian response to the millions of Ukrainians who are fleeing to Poland to escape.

Biden’s first stop was with members of the US Army’s 82nd Airborne Division, visiting a barber shop and dining facility set up for the troops, where he invited himself to sit down and share some pizza. The Americans are serving alongside Polish troops.

He arrived on Friday afternoon at the airport in Rzeszow, the largest city in southeastern Poland, where some US troops are based.

He will be in Warsaw on Saturday for talks with Polish President Andrzej Duda and others. The Polish leader was to welcome Biden at the airport on Friday, but his plane was delayed by a technical problem.

Speaking in Brussels earlier after meetings with other world leaders, Biden said Poland, Romania and Germany shouldn’t be left on their own to deal with the largest refugee crisis in Europe since World War II.

“This is an international responsibility,” Biden said shortly after he announced $1 billion in additional assistance to help Ukrainian refugees. He also announced that the United States would take in up to 100,000 of those refugees. (AP)

In summary: What are main developments on the ground in Ukraine?

A military chaplain was killed by Ukrainian “Smertch” rocket fire on a Russian border village not far from the Ukrainian city of Kharkiv in heavy fighting, the Orthodox Church said on Friday.

Civilians are starving in Mariupol, the city council said in a statement on Telegram, emphasising that “more and more people are left without any food supplies” in the port city that has been under siege since early March.

Ukrainian forces are striking “high-value targets in Russian-occupied areas of Ukraine” including a landing ship, the UK Ministry of Defence has said.

The UK added on Friday that Ukraine has re-occupied towns up to 35 kilometres east of Kyiv.

Ukraine’s armed forces said in a statement that a large Russian landing ship was destroyed during an attack on the Berdyansk port. Large landing ships “Caesar Kunikov” and “Novocherkassk” were damaged, they added.

Russia claimed on Friday that it had destroyed the Ukrainian army’s largest fuel reserve near Kyiv with cruise missiles the day before.

Russia is running out of precision-guided munitions, a senior Pentagon official said, according to Reuters.

Russians and Ukrainians exchanged prisoners on Thursday, according to the Ukrainian deputy prime minister and the Russian human rights delegate.

At least 135 children have died in the war in Ukraine, according to Ukraine’s human rights commissioner Lyudmyla Denisova.

What is happening in the EU and the West?

The EU and US agreed on a partnership to reduce European reliance on Russian natural gas.

Ukraine on Friday asked the European Union to close its borders with Russia and Belarus, a country allied with Moscow in the invasion of Ukraine by the Russian army for a month.

US President Joe Biden travelled to Rzeszow, Poland on Friday close to the border with Ukraine as the country hosts more than two million refugees.

Finnish train operator VR will stop its twice-daily service from Helsinki to St Petersburg, closing down the last remaining rail route for Russians who want to travel directly to the EU.

What is the latest that Western leaders saying about the conflict?

US President Joe Biden said he wanted Russia out of the G20, and that a Russian chemical weapons attack in Ukraine would “trigger a response in kind”.UK Prime Minister Boris Johnson told the BBC he wasn’t sure that Vladimir Putin wanted peace and said the Russian president was trying to “Grozynyfy” Ukrainian cities, referring to the Chechen city of Grozny.German Chancellor Olaf Scholz says the world is united in its response to the Russian attack on Ukraine last month and said that sanctions against Russia were proving to be powerful.

What is Russia saying about the war?

Russia says they have taken in 419,736 Ukrainian refugees since the beginning of the war.Vladimir Putin compared the West’s sanctions against Russian culture to the burning of books in Nazi Germany.The Russian army has said 1,351 of its troops have died in the past month of the war in Ukraine. NATO estimated that the number was higher, at around 7-15,000.

How many refugees have fled Ukraine?

In the month since the war began, more than 3.6 million people have fled the war in Ukraine. Most of them have fled to neighbouring Poland, which has taken in over two million refugees.

Millions of Ukrainians are also internally displaced within the country as heavy fighting and shelling forces people to flee several cities.

More than half of Ukraine’s child population is displaced, according to the UN Children’s Fund, UNICEF, which called it a “grim milestone”. 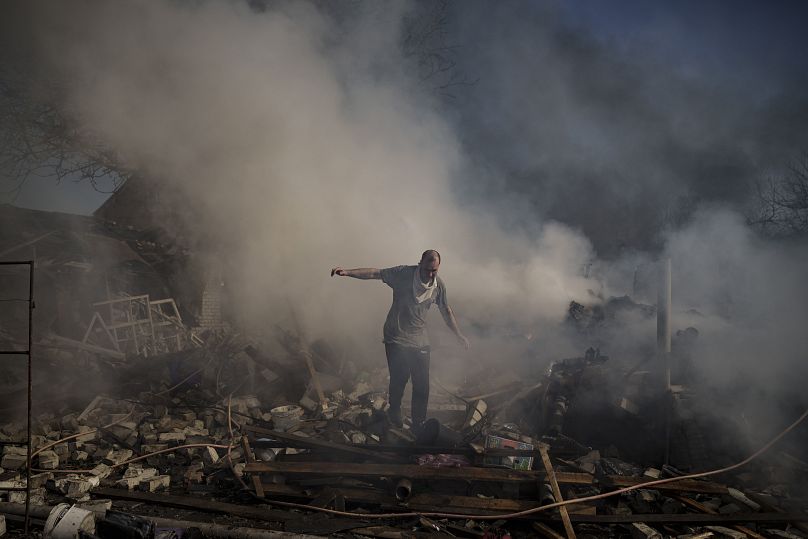 A man walks on the debris of a burning house, destroyed after a Russian attack in Kharkiv, Ukraine, Thursday, March 24, 2022.Felipe Dana/AP Photo 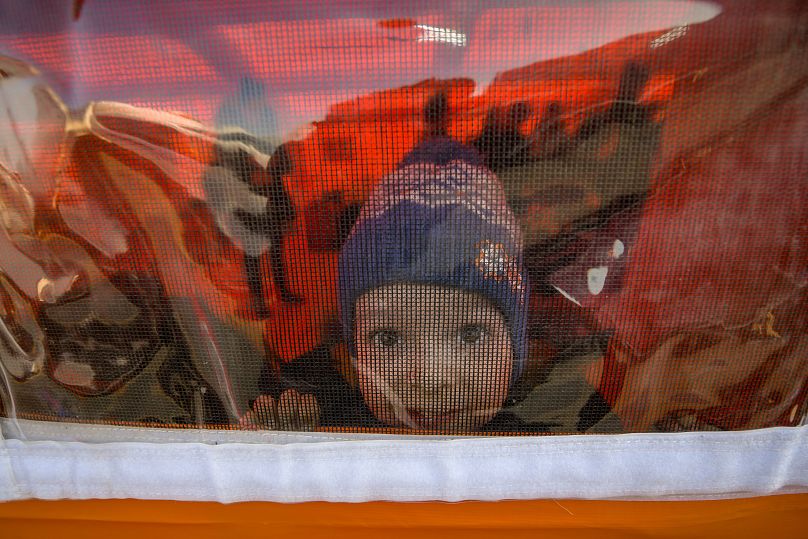 A refugee fleeing the war from neighbouring Ukraine with his family looks out of a tent after crossing the border by ferry at the Isaccea-Orlivka border crossing in Romania.Andreea Alexandru/AP Photo 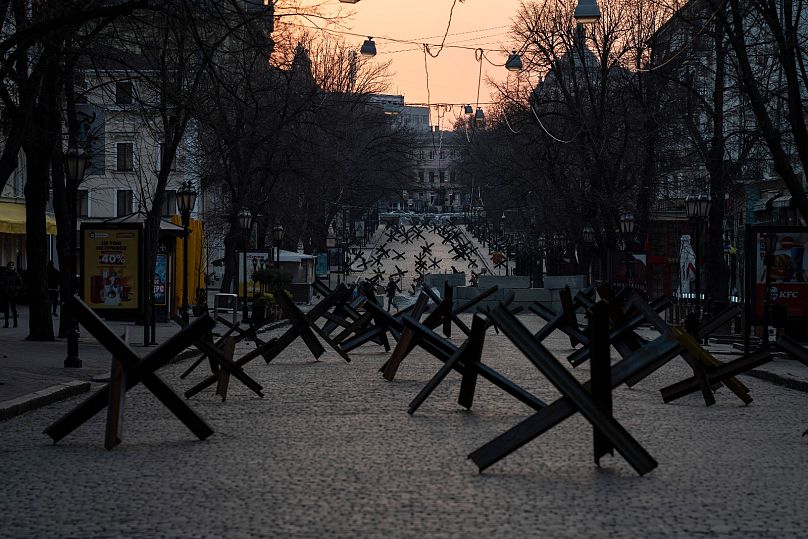 Anti-tank barricades are placed on a street as preparation for a possible Russian offensive, in Odesa, Ukraine, Thursday March 24, 2022.AP Photo/Petros Giannakouris 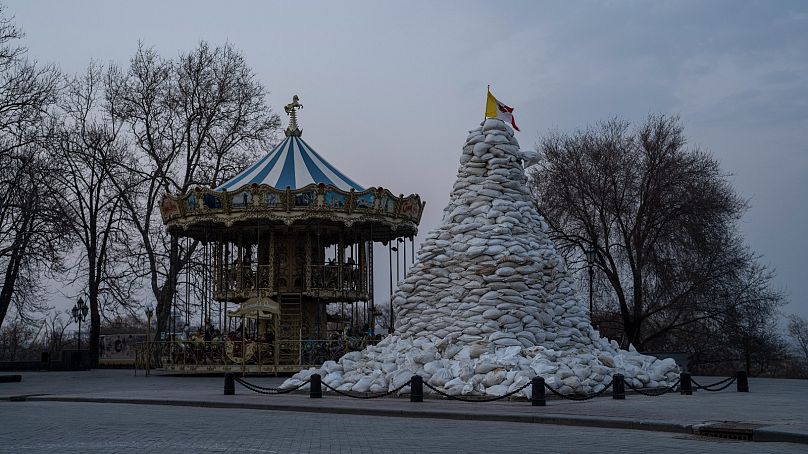 The monument of the Duke of Richelieu, is covered with sandbags next to a Carrousel, in Odesa, Ukraine, Thursday March 24, 2022.AP Photo/Petros Giannakouris

Read more about the conflict

For Soviet-Afghan war veterans, Ukraine is a conflict ‘without honour’

‘I went to rescue wife’s family from a tomb’: Man’s epic Ukraine trip

EU’s threats and abuse show the border crisis in…