Ukraine war: Fuel depot in Russia ablaze as Moscow blames Kyiv for attack on its territory

In this handout photo released by Russian Emergency Ministry Press Service on Friday, April 1, 2022, a view of the site of fire at an oil depot in Belgorod region, Russia.

Follow our blog below for the latest details, or watch Euronews live in the video player, above.

Russia has accused Ukraine of striking an oil depot inside its territory. The site at Belgorod was ablaze on Friday. Ukraine says it can neither confirm nor deny responsibility.The Red Cross hopes to send a team to Mariupol to lead a convoy of over 50 buses carrying civilians out of the besieged city. But they have been barred from taking in humanitarian aid and authorities say Russian occupiers have been blocking access.Russia and Ukraine have resume peace talks via video link.Moscow says its demand that natural gas be paid for in roubles doesn’t mean supplies will be immediately interrupted. The Kremlin says payments on current supplies must be made in a month’s time.It follows Vladimir Putin’s threat on Thursday to terminate contracts unless “unfriendly” foreign buyers paid in roubles for Russian gas from Friday. Germany and France have reiterated that European countries will continue to pay in euros or dollars.The war in Ukraine has pushed the eurozone’s inflation to a record 7.5%, new figures show.President Zelenskyy said Russians are withdrawing from key northern and central areas but building up for a new offensive in the southeast.Australia announced on Friday it would send more armoured vehicles to Ukraine to help the war effort.Russian troops left the heavily contaminated Chernobyl nuclear site early Friday after returning control to the Ukrainians.

The International Committee of the Red Cross says a team intending to help people leave the besieged city of Mariupol was unable to reach the port city on Friday.

The Red Cross said in a statement that the team hopes to try again Saturday.

“Arrangements and conditions made it impossible” for the convoy of three vehicles to get safely to Mariupol and they returned to Zaporizhzhia, it said.

“For the operation to succeed, it is critical that the parties respect the agreements and provide the necessary conditions and security guarantees,” the organisation said.

The 31 member states of the International Energy Agency (IEA) agreed on Friday to a new release of oil from emergency reserves in response to the market turmoil driven by Russia’s invasion of Ukraine, the agency said in a statement following an extraordinary meeting of the governing board.

The member countries had pledged just last month to release a total of 62.7 million barrels; the details of the new oil release will be made public next week.

Russia is the world’s third-largest oil producer and its largest exporter. Its exports of about 5 million barrels a day of crude oil represent roughly 12% of global trade, the IEA said. Around 60% of those exports go to Europe.

At least 53 cultural sites have been damaged in Ukraine since the start of the Russian invasion, the United Nations Educational, Scientific and Cultural Organisation (UNESCO) reported on Friday.

Among the sites are 29 religious sites, 16 historic buildings, four museums and four monuments, the damage of which UNESCO was able to verify by satellite imagery and people on the spot, a spokesperson for the organisation said, adding that the list “is not exhaustive”.

“Our experts continue to verify each report and it is feared that other sites will be added to this list,” the spokesperson said.

EU urges China to stay neutral but without securing any guarantees

EU leaders warned China not to support Russia’s invasion of Ukraine but failed to secure a pledge of non-interference in the war.

Ensuring that China maintains a hands-off, equidistant approach to the conflict was the main goal of a virtual EU-China summit that took place on Friday. 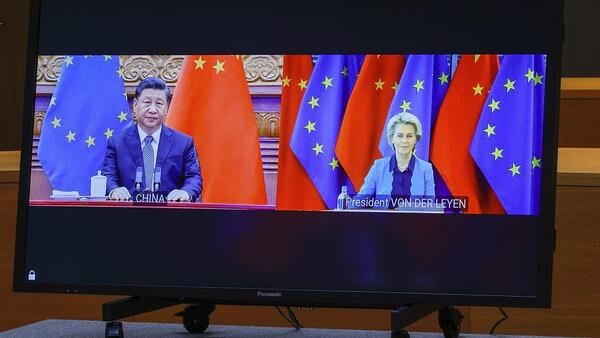 Friday’s EU-China summit was entirely virtual and had a marked focus on the Ukraine war. – Copyright Olivier Matthys/AP Photo

Two Ukrainian officials said on Friday that there the second prisoner swap with Russia took place.

The information was also confirmed by presidential advisor Kirill Tymoshenko on Telegram.

A fuel depot inside Russian territory was on fire on Friday, after what Russia called a cross-border air raid by Ukrainian helicopters.

The site is at Belgorod, one of Russia’s main logistics hubs for its Ukraine war effort, about 40 kilometres from the border. Ukraine said it would neither confirm nor deny responsibility.

“I can neither confirm nor reject the claim that Ukraine was involved in this,” said Ukrainian Foreign Minister Dmytro Kuleba, adding that he did not have all the “military information”.

An attack by Ukraine on Russian territory would be the first of its kind in the five-week war.

Security camera footage of the depot, from a location verified by Reuters, showed a flash of light from what appears to be a missile fired from low altitude in the sky, followed by an explosion on the ground.

The regional governor, Vyacheslav Gladkov, said two Ukrainian helicopters had been involved in the raid.

Reuters quoted an anonymous eyewitness from Belgorod as saying there were continuous explosions from the direction of the border.

Kremlin spokesman Dmitry Peskov warned that the incident would not “create appropriate conditions for further negotiations”.

However, shortly afterwards the Russian side announced the resumption of Russian-Ukrainian talks by videoconference.

The Red Cross is sending staff to Mariupol hoping to begin to evacuate thousands of civilians stuck in the southeastern city. A team of three cars carrying nine staff hope to lead out a convoy of 54 Ukrainian buses and a number of private cars.

But they have not been able to take in humanitarian aid including medical supplies, which they have to leave behind in Zaporizhzhia.

Earlier, authorities in Mariupol say it is not possible to enter the besieged Ukrainian city and that it is dangerous for people to try and leave it on their own.

“We don’t see a real desire from the Russians … to provide an opportunity for Mariupol residents to evacuate to territory controlled by Ukraine,” Petro Andryushchenko, adviser the mayor of the city, said Friday on the messaging app Telegram.

“Since yesterday, the occupiers have categorically not allowed any humanitarian cargo, even in small volumes, to enter the city,” he added.

A convoy of about 2,000 refugees, escorted by the Red Cross, on Friday afternoon was heading to Zaporizhzhia, which is under Ukrainian control.

The Mariupol city council on Friday said Russia’s actions in Ukraine and in their bombed-out city amounted to genocide.

“We made it very clear that China should, if not support, at least not interfere with our sanctions. No European citizen would understand any support to Russia’s ability to wage war. Moreover, it would lead to a major reputational damage for China here in Europe,” von der Leyen said at a press conference following a videoconference with China.

“This is a defining moment not only for Europe but also for the rules-based order.”

Ukraine’s general staff says the country’s armed forces have retaken control over 29 settlements in the Kyiv and Chernihiv regions, where Russia has pulled back some of its troops.

The Russian military in the northeast continues to block and shell Chernihiv and Kharkiv, the general staff said Friday.

In the southeast of the country, the Russians are trying to seize the cities of Popasna, Rubizhne and Mariupol in order to expand the territory of the separatist republics of Donetsk and Luhansk, according to the Ukrainian military.

Health officials: Flu could rise this season as COVID-19 restrictions…