President Putin says “unfriendly” foreign buyers must pay in roubles for Russian gas from Friday, or else contracts will be halted. Germany and France have reiterated that European countries will continue to pay in euros or dollars.NATO chief Jens Stoltenberg has said intelligence shows Russian forces are not withdrawing but “repositioning” and regrouping.A Red Cross team has arrived in southeastern Ukraine to help with a planned evacuation from Mariupol. Kyiv is sending 45 buses to get people out during a Russian ceasefire.Ukraine says Russian forces have begun to withdraw from the Chernobyl nuclear site, which they took control of on the first day of the invasion.President Zelensky says his country’s defence is at a turning point, as they brace for a renewed Russian offensive in the east of Ukraine.Demoralised Russian soldiers in Ukraine are refusing to carry out orders and sabotaging their own equipment, says UK spy chief.The Pentagon and the White House say intelligence suggests Vladimir Putin may not be getting the “full picture” of the war in Ukraine from his advisers.

Russia imposes travel ban on EU leaders and most MEPs

Russia says it is banning European leaders and the majority of MEPs from entry into its territory, in reaction to punitive measures aimed at Moscow for its invasion and war in Ukraine.

“The restrictions apply to the most senior leaders of the European Union, including a number of European commissioners and heads of European military bodies, as well as the vast majority of members of the European Parliament, who promote anti-Russian policies,” the Russian Foreign Ministry said in a statement.

This measure also applies to politicians from EU member countries, as well as public figures and journalists who “have supported illegal sanctions against Russia, incited Russophobia or violated the rights and freedoms Russian-speaking populations,” the ministry added. It has not published a list of those targeted.

Since the unprovoked Russian invasion of Ukraine on February 24, the West — led by the United States and the EU — has imposed heavy economic sanctions on Russia, targeting in particular President Vladimir Putin, his government and oligarchs.

Putin has ‘already lost’ in Ukraine — head of UK military

The head of Britain’s military says Russian President Vladimir Putin has “already lost” in Ukraine and is weaker than he was before the invasion.

Admiral Tony Radakin at a think-tank seminar Thursday in London said Moscow’s aim to “take the whole of Ukraine” fell apart. He added that the coming weeks “will continue to be very difficult” for Ukraine.

“But in many ways, Putin has already lost,” he said. “Far from being the far-sighted manipulator of events that he would have us believe, Putin has damaged himself through a series of catastrophic misjudgements.”

Radakin also said there was “disquiet” at all levels of Russia’s military about the campaign, from troops who were not told they were invading Ukraine up to senior commanders.

Western officials say Putin’s small inner circle is not giving him the true picture of the war, and his isolation may have contributed to miscalculating the strength of resistance Russian troops would meet.

Antibiotics may raise risk for inflammatory bowel disease in…

The operator, Energoatom, said that the Russian military was also preparing to leave Slavutych, a nearby city where power plant workers live.

Energoatom also said reports were confirmed that the Russians dug trenches in the Red Forest, the 10-square-kilometre area surrounding the Chernobyl plant within the Exclusion Zone, and received “significant doses of radiation.”

The Russian troops “panicked at the first sign of illness,” which “showed up very quickly,” and began to prepare to leave, the operator said. The claim couldn’t be independently verified.

Energoatom said the Russians have signed a document confirming the handover of the Chernobyl plant and stating that the plant’s administration doesn’t have any complaints about the Russian troops who were “guarding” the facility.

A team with the International Committee of the Red Cross has arrived in a Ukraine-held city where staff are preparing to take civilians out of the beleaguered port city of Mariupol.

Julien Lerisson, deputy director of operations for the ICRC, said Thursday that the team assembling in the southeastern city of Zaporizhzhia, has medicines, food, water, hygiene items and other essentials.

He said the organization has high-level agreement for the mission but is focused on making sure “the order trickles down the chain of command,” allowing the team to enter and leave Mariupol safely.

The Russian military has said it committed to a cease-fire along the route from Mariupol to Zaporizhzhia. Ukrainian authorities have said 45 buses would be sent to collect citizens and provide resources to those who remain.

Lucile Marbeau, a staff member with the ICRC team hoping to enter Mariupol, said on Thursday: “We’re here because really, we hope to be able to facilitate safe passage for civilians desperately wanting to flee Mariupol.”

The Russian president said “unfriendly” buyers must pay for gas in roubles from Friday or “contracts will be stopped”. European countries have refused. 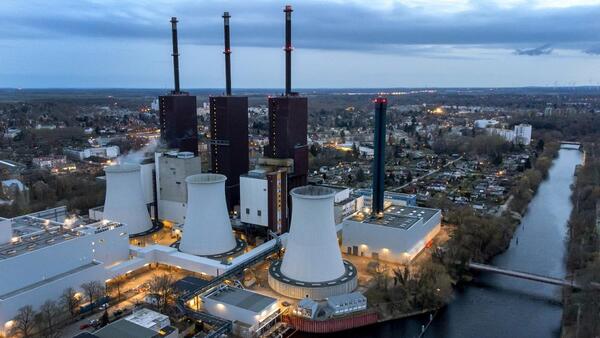 Washington announced new sanctions against Russia on Thursday, this time targeting the technology sector, including Russia’s largest semiconductor manufacturer, in part to prevent the circumvention of Western sanctions.

“OFAC (the Treasury’s Office of Foreign Assets Control) is designating 21 entities and 13 individuals as part of its crackdown on the Kremlin’s sanctions evasion networks and technology companies, which are instrumental to the Russian Federation’s war machine,” says a statement on the US Treasury website.

The Treasury adds via Twitter that it has “also expanded sanctions authorities to include aerospace, marine, & electronics sectors of the Russian economy. Today’s actions are a part of the comprehensive response to restrict sectors that are essential to supplying Putin’s continued invasion of Ukraine.”

Russian forces have begun to withdraw from the Chernobyl nuclear site, which they took control of on the first day of the invasion of Ukraine on February 24, the Ukrainian nuclear agency announced on Thursday.

The troops occupying the site left “in two columns towards the border” between Ukraine and Belarus, Energoatom said on Telegram, adding that there are only a “small number” of Russian soldiers left on the spot.

European countries will continue to pay for Russian gas in euros and dollars as it is “written in the contracts”, was the response to Putin from German Chancellor Olaf Scholz. (see earlier post)

The Russian president says “unfriendly” foreign buyers must pay for gas in roubles from Friday, raising the prospect of Moscow turning off the tap.

“It is written in the contracts that the payments are made in euros and sometimes in dollars”, the German chancellor said during a press conference with his Austrian counterpart, Karl Nehammer.

“I made it clear to the Russian president that it would stay that way” and “companies want to be able to pay in euros and will do so,” he added.

French Finance Minister Bruno Le Maire, speaking in Berlin, said Germany and France are “preparing” for a potential stoppage of Russian gas imports, as the Europeans are refusing Moscow’s demands for payment in roubles for gas supplies.

“There may be a situation in which tomorrow, in very specific circumstances, there will be no more Russian gas (…) it is up to us to prepare these scenarios, and we are preparing them”, he said during a press conference with the German Economy Minister Robert Habeck.

Alcohol intake at any level may increase risk of heart disease, study suggests

Italy election: Live updates as far-right party wins most votes, according to exit…