A woman walks outside a maternity hospital that was damaged by shelling in Mariupol, Ukraine, Wednesday, March 9, 2022.

Ukraine’s president has accused Russia of carrying out a “war crime” after Moscow’s attack on a children’s hospital in the besieged port of Mariupol.

Three people died in the blast, including a girl, Mariupol City Council said on Thursday.

Washington has publicly warned that Russia might launch a chemical or biological attack in Ukraine, after Moscow accused Kyiv of having chemical weapons laboratories, without giving any evidence.

Follow our live updates below for the latest on the Ukraine war.

Ukrainian President Volodymyr Zelenskyy accused Russia of war crimes and genocide after Russia attacked a children’s hospital in Mariupol, burying patients in rubble despite a ceasefire deal.The local authority said on Thursday that three people including a girl were killed in the attack. On Wednesday it was reported that 17 people were hurt.Russian aircraft bombed Zhytomyr, a large city west of Kyiv, on Wednesday evening. The mayor said bombs fell on two hospitals, one of them a children’s hospital. Artillery fire also continued pounding the suburbs of Kyiv and Kharkiv.The White House says Moscow’s accusations that Ukraine has chemical weapons labs could be part of an attempt by Russia to lay the groundwork for using weapons of mass destruction against Ukraine.Some 35,000 civilians were evacuated in humanitarian corridors on Wednesday from the besieged cities of Sumy and Enerhodar as well as the Kyiv region, President Zelenskyy said.The Pentagon has rejected providing MiG fighter jets to Ukraine, calling the idea “high risk” and ineffective.The Russian and Ukrainian foreign ministers are due to meet in Turkey on Thursday, their first meeting since the invasion.Thursday marks two weeks since Vladimir Putin’s forces invaded Ukraine. Thousands have been killed as towns and cities have been pounded, two million have fled abroad, while Russia has been hit by Western sanctions and a business exodus.

The British government has added the owner of Chelsea football club Roman Abramovich to its sanctions list.He is one of several oligarchs to be added to the list, following the Russian invasion of Ukraine.The move means Abramovich will have “his assets frozen, a prohibition on transactions with UK individuals and businesses, a travel ban and transport sanctions imposed”, the government says.It adds that those sanctioned “are banned from travelling here and no UK citizen or company may do business with them”.The government statement adds that given the “significant impact” the move will have on Chelsea, it has issued a licence to allow matches and other football-related activity at the club to continue.Abramovich has a net worth of £9.4 billion (€11.2 billion), the government says, adding that “he is one of the few oligarchs from the 1990s to maintain prominence under Putin”.Read more on the UK government website.10:14

‘Beyond atrocity’: Zelenskyy calls on Europe to act after Russia’s hospital attack

“Europeans, you won’t be able to say that you didn’t see what happened to Ukrainians in Mariupol. You saw. You know.”Ukraine’s President Zelenskyy calls on Europe to strengthen sanctions to force Russia to end its “barbarous” war.10:04

Britain’s armed forces minister James Heappey has said the success of Ukrainian air defences has prevented Russia from gaining air superiority, and that the Russian air force is effectively only able to operate at night.He accused the Russian military command of using long-range artillery either indiscriminately against urban areas, or to target deliberately the likes of the hospital struck in Mariupol on Wednesday.”It is a war crime to target something like that, and it is a war crime to not have due regard in your targeting for a protected site like a hospital when you’re using artillery,” he told BBC radio.The UK is to send a new type of weapon to Ukraine, the “Starstreak” anti-aircraft missile.09:50

How one woman survived and escaped Russia’s bombardment of Kharkiv

“The crowd is running to the train to go somewhere, and so are we. And we have backpacks, a suitcase, two cats… Then heavy gunshots began to be heard and we ran into the subway in wild fear.”Inna describes the horror of the bombing, the scramble to get supplies and her remarkable journey across Ukraine with her 16-year-old daughter to safety in Slovakia.Read her story here: 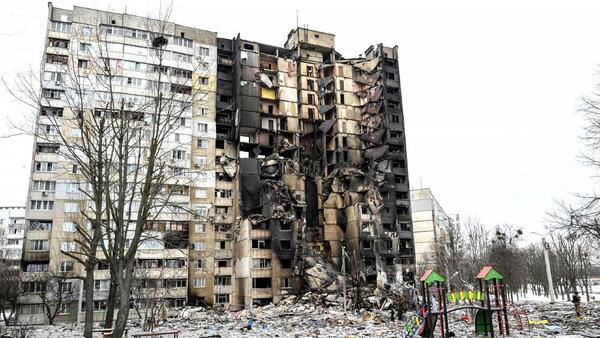 How one woman survived and escaped Russia’s bombardment of Kharkiv

“The next night was just hell. It felt as if they were hitting us with all the guns that exist.”08:54

Three people, including a child, were killed in the Russian bombing of a pediatric hospital in Mariupol in eastern Ukraine on Wednesday, the local authority said on Thursday.”Three people perished, including a girl,” the municipality said on Telegram. The previous assessment published the day before by the authorities reported 17 people injured.08:24

Lavrov and Kuleba to meet in Turkey

Russia’s Sergey Lavrov and Dmytro Kuleba of Ukraine are scheduled to hold talks on the sidelines of a diplomacy forum near the Turkish Mediterranean city of Antalya. It would be the first high-level meeting between Moscow and Kyiv since the start of Russia’s invasion of Ukraine. Cavusoglu said he would also participate in the meeting.

NATO-member Turkey, which has cultivated close ties with both Russia and Ukraine, is trying to balance relations with both nations. It has positioned itself as a neutral party, seeking to facilitate negotiations between the warring sides.

The latest intelligence update published by the British defence ministry says the large Russian convoy northwest of Kyiv has “made little progress in over a week and is suffering continued losses” inflicted by Ukrainian forces.It also reports a “notable decrease in overall Russian air activity over Ukraine”, which it attributes to the “unexpected effectiveness and endurance” of Ukraine’s air defence forces.It forecasts that as casualties mount, Putin will have to draw from wider military sources.

Russian aircraft bombed Zhytomyr, a city of 260,000 west of Kyiv, hitting two hospitals, including a children’s hospital, Mayor Serhii Sukhomlyn said on Facebook. He said there were no injuries.The World Health Organization said Wednesday it has confirmed 18 attacks on health facilities and ambulances in Ukraine in which 10 people were killed. It was not clear if its numbers included the assault on the maternity hospital in Mariupol.After darkness fell on Wednesday, Russian artillery again began shelling Kyiv suburbs.(AP)07:30

Ukrainian President Volodymyr Zelenskyy called on the West to impose even tougher sanctions on Russia after the airstrike on the maternity hospital in Mariupol, which he described as a “war crime”.

“A genocide of Ukrainians is taking place,” Zelenskyy said Wednesday in his daily late evening video address to the nation. Wearing his now traditional wartime army green, he said the West should strengthen the sanctions so Russia “no longer has any possibility to continue this genocide.”

“What kind of country is this, the Russian Federation, which is afraid of hospitals, is afraid of maternity hospitals, and destroys them?” Zelenskyy said in a televised address late on Wednesday.

He said 17 people were injured in the attack, including pregnant women. The city council said the hospital suffered “colossal” damage.

The White House condemned the hospital bombing as a “barbaric use of military force to go after innocent civilians”.

Mariupol has been blockaded by Russian troops for nine days. City officials said Wednesday that about 1,200 residents have been killed.

Zelenskyy again called on Western leaders to impose a no-fly zone over Ukraine, something NATO members have refused to do for fear of provoking a wider war with Russia. Short of that, Zelenskyy called for the delivery of more fighter jets to Ukraine, a proposal the Pentagon rejected on Wednesday.

Zelenskyy said about 35,000 civilians have used humanitarian corridors to flee to western Ukraine to escape the fighting. 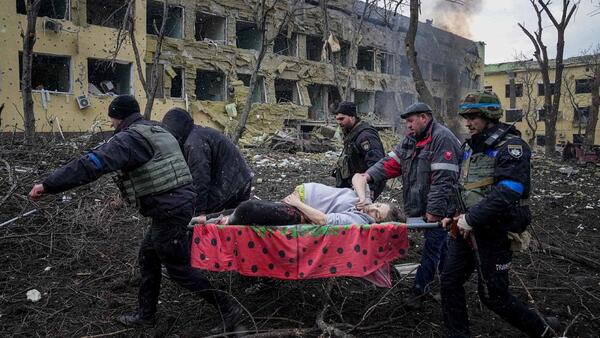 euronewsPolice and soldiers rushed to the scene to evacuate victims, carrying out a heavily pregnant and bleeding woman on a stretcher.

Ukraine war: Fears up to 300 died in Mariupol theatre attack as Biden visits…

Twelve years of Orban: How the EU has failed to rein in…