Russia and Ukraine are separately investigating allegations that Russian prisoners of war have been mistreated by Ukrainian soldiers.

An unverified graphic video has been shared online, claiming to show captured Russians being shot in the leg.

The footage was widely spread on social media platforms Telegram, TikTok and Twitter, including by a number of pro-Russian accounts.

Kremlin spokesperson Dmitry Peskov said on Monday that the images were “monstrous” and would need to be legally assessed so that those who had taken part in the alleged torture were held responsible.

The authenticity of the video’s contents is still to be confirmed.

What do we know about the video?

The graphic video shows a number of soldiers being forcibly pulled out of a van, while others are seen on the floor covered in what appears to be blood.

The captives still upright collapse to the ground after apparently being shot in the legs by a soldier wearing a blue armband.

Their captors — speaking in Russian but using a Ukrainian dialect — can also be heard asking for information regarding the prisoners’ motives and which military units they came from.

Analysis by independent fact-checkers has found that the video was filmed at a dairy processing plant to the southeast of the city of Kharkiv. The date of the video remains unclear.

Some have drawn similarities with a clip posted in 2017, apparently showing the same plant as the one seen in the graphic video.

Ukrainian forces had recently retaken the area in question from Russian soldiers. 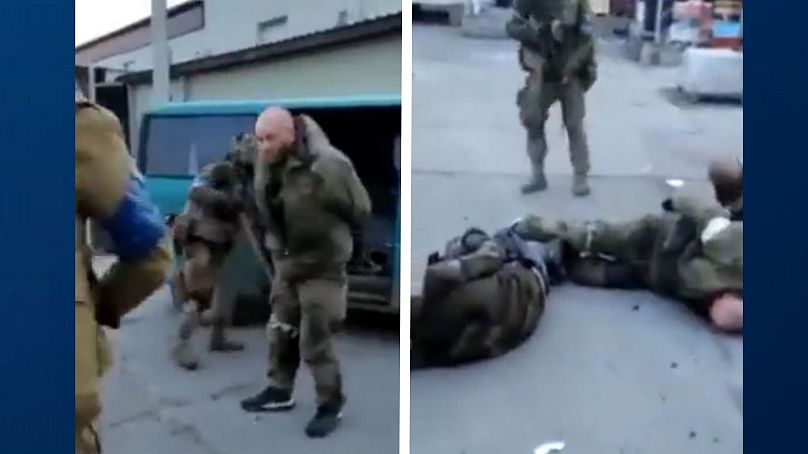 The grainy video was first shared on social media platforms over the weekend.Euronews via Telegram

What has been the reaction?

Ukraine’s presidential adviser Oleksiy Arestovych issued a stark reminder to his country’s soldiers in an address posted on Instagram.

“Since we have counterattacked in some areas, it means that there will be many prisoners,” Arestovych said.

“I would like to remind all our military, civilian and defence forces once again that the abuse of prisoners is a war crime that has no amnesty under military law and has no statute of limitations.”

“I remind everyone that we are the European army of a European country. We treat prisoners according to the Geneva Convention, no matter what your personal emotional motives.”

The Ukrainian government has said that it takes the allegations of torture “very seriously” and has launched an immediate investigation into the graphic video.

Arestovych added in a Telegram post that if the video is proven to be real, “the guilty will be punished”

On the other hand, the Commander-in-Chief of Ukraine’s Armed Forces has explicitly dismissed the rumours in a statement on Facebook, claiming that Russia was “staging videos” to discredit the Ukrainian army.

“The enemy is filming and distributing staging videos with the inhumane attitude of alleged Russian prisoners by ‘Ukrainian soldiers’ [the] Ukrainian military in order to discredit Ukrainian Defence Forces,” said General Valerii Zaluzhnyi.

“I urge [you] to take into account the realities of informational and psychological warfare and trust only official sources.”

Zaluzhnyi also added that all Ukrainian military personnel comply with “the rules of international humanitarian law’.

Head of the UN’s human rights office in Ukraine, Matilda Bogner said on Tuesday that the video “does raise serious concerns” and confirmed that they were being examined.

“It is important that these types of videos and that any ill-treatment that may happen is stopped immediately,” she added.

Russian negotiators reportedly brought up the alleged abuse of prisoners of war during peace talks with Ukraine in Istanbul.

Both Ukraine and Russia have been guilty of spreading war propaganda and misinformation since the start of the war on February 24.

The International Criminal Court said it would “immediately proceed” with an investigation into potential war crimes during Russia’s invasion.

Soon after the video of alleged torture appeared online, the unverified image of a letter was also shared.

The letter claimed to show Russia’s defence ministry authorising the military to film propaganda videos to discredit Ukrainian forces in their treatment of Russian prisoners.

The letter claimed to have been written and signed by Dmitry Bulgakov, a deputy to Russia’s Minister of Defence Sergei Shoigu.

But there are also several doubts about the validity of this supposed letter. 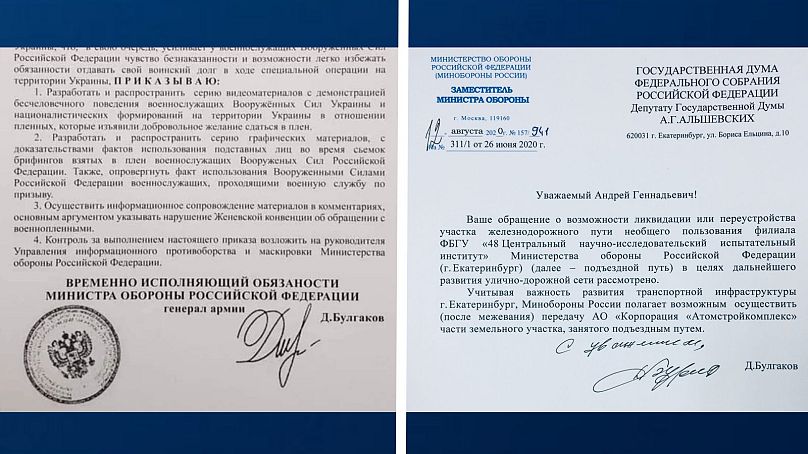 The supposed signatures of Dmitry Bulgakov appear differently in two letters.Euronews via Twitter

When compared to a letter apparently signed by Bulgakov and posted on Twitter by a Russian politician in 2020, the signatures appear different.

Fact-checking groups Open and Bellingcat also found that the signature on the “leaked” letter was identical to one found on an unrelated Russian personality quiz.

The letter supposedly signed by Bulgakov, therefore, seems to be manipulated.

Euronews is still working to verify the contents of the graphic video and related reports.

Ukraine war: Russia to ‘scale back military operations in Kyiv and Chernihiv’

‘Seized by some invisible hand’: What it feels like to…

Forgotten in Albania: Afghans dream of America one year after the…

COVID-19: Take a lateral flow test before you visit busy…