Ukrainian soldiers help an elderly woman to cross a destroyed bridge as she evacuates the city of Irpin, northwest of Kyiv, on March 8, 2022.

Civilians have begun leaving the northeastern town of Sumy and the Kyiv suburb of Irpin under new ceasefire arrangements, allowing for the evacuation of besieged areas.

However, Ukraine has accused Russia of violating the plan near Mariupol by shelling the planned route.

Follow our live updates below for the latest on the Ukraine war:

Moscow’s second ceasefire and ‘humanitarian corridor’ offer in two days — to evacuate civilians from Mariupol, Kyiv, Sumy, Irpin and Chernigov — involves transporting civilians to a choice of destinations: Belarus or Russia, but also to places in Ukraine. Ukraine has accused Russia of shelling the planned evacuation route near Mariupol, in violation of the ceasefire.NATO’s chief says there are ‘credible reports’ of Russian forces targeting civilians.Latest UN figures say the number of Ukrainian refugees to have fled abroad has now topped two million.Unconfirmed claims by Ukraine say they have killed Major General Vitaly Gerasimov, first deputy commander of Russia’s 41st army, near Kharkiv. Brussels was due to unveil new plans to ditch Russian fossil fuels to achieve greater energy independence following Moscow’s invasion of Ukraine.For a summary of Monday’s developments click here.

The Russian army announced a new ceasefire for the evacuation of civilians in Ukraine from 7 am on Wednesday, domestic media reported.

“Russia announces a ceasefire regime from 10 am Moscow time on 9 March and is ready to implement humanitarian corridors,” the Russian government’s unit in charge of these issues was quoted as saying by the TASS agency.

The ceasefire along the humanitarian corridors did not go according to plan on Tuesday, as Ukraine accused Russia of violating the ceasefire near Mariupol by shelling the agreed route.

Israel said Tuesday it would provide temporary refuge to some 25,000 Ukrainians outside of its Law of Return, under which all Jews are eligible for citizenship.

Interior Minister Ayelet Shaked said in a statement that 20,000 Ukrainians who were in Israel without legal status before the outbreak of fighting will be shielded from repatriation “until the danger subsides.”

Another 5,000 Ukrainians will initially be granted three-month visas and will be allowed to work if the fighting continues beyond then. Ukrainians can apply for the program online through the Israeli Foreign Ministry’s website.

Israel expects to absorb around 100,000 Ukrainians through its Law of Return, under which Jews from anywhere in the world can come to Israel and get citizenship, Shaked said.

McDonald’s closes all restaurants in Russia

McDonald’s said Tuesday it is temporarily closing all of its 850 restaurants in Russia in response to the country’s invasion of Ukraine.The burger giant said it will continue paying its 62,000 employees in Russia. But in an open letter to employees, McDonald’s President and CEO Chris Kempckinski said closing those stores is the right thing to do because McDonald’s can’t ignore the “needless human suffering in Ukraine”.McDonald’s owns 84% of its Russian restaurants. In a recent financial filing, the company said Russia and Ukraine contributed 9% of the company’s revenue last year.18:31

‘We shall go on to the end’, Zelenskyy tells British MPs

Ukrainian President Volodymyr Zelenskyy addressed British MPs in what has been deemed an “important opportunity” by the House of Commons Speaker Lindsay Hoyle.

“We shall go on to the end”, Zelenskyy said, invoking a famous speech by UK Prime Minister Winston Churchill in the same spot on 4 June 1940, as World War II raged across the continent.

The MPs responded with a standing ovation. 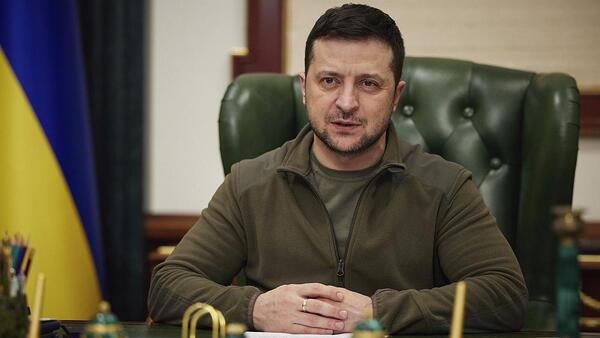 ‘We shall go on to the end’, Ukraine’s Zelenskyy tells British MPs

euronewsZelenskyy repeated his demands for a no-fly zone above Ukraine — a proposition rejected by Western leaders due to fears it might provoke a world war.

President Joe Biden ordered an embargo on US imports of Russian oil and gas on Tuesday, a further tightening of sanctions against Russia over its invasion of Ukraine meant to “deal another powerful blow to Putin”.

The embargo on energy imports was decided “in close coordination” with allies, Biden stated.

The international scientific laboratory that is home to the world’s largest particle collider says it is suspending Russia’s observer status and halting any new collaboration with Russia or its institutions “until further notice”.

The European Organisation for Nuclear Research, known as CERN, said its 23 member states — all European, plus Israel — condemned Russia’s invasion of Ukraine. Ukraine is one of seven associate member states, and Russia, like the EU, Japan and the US, has had observer status.

The CERN council made the decisions about Russia at a special meeting on Tuesday and expressed its support “to the many members of CERN’s Russian scientific community who reject this invasion”.

CERN is home to the Large Hadron Collider, the world’s largest particle accelerator.

The mayor of a Polish town bordering Ukraine has called out the leader of Italy’s right-wing League party for his pro-Kremlin views.It happened on Tuesday in the town of Przemysl when local Mayor Wojciech Bakun challenged Salvini during a press conference at the train station where hundreds of thousands of refugees have arrived since February 24th.Mayor Bakun pulled a t-shirt from his jacket showing Putin’s face and the words ‘Army of Russia.’ The t-shirt was similar to one that Salvini had worn publicly in the past.Bakun said he wanted to personally escort Salvini wearing the t-shirt to a refugee centre “to see what your friend Putin has done”.Salvini interrupted Bakun as he spoke, saying: “We are helping refugees, children, moms, dads, from Ukraine.” He then walked away.In the past, Salvini has praised Putin as “one of the best statesmen.” He has denied taking money from the Kremlin. During the visit, he was heckled by several people who called him a “buffoon”.

The Spanish judiciary announced on Tuesday the opening of an investigation into “serious violations of international humanitarian law” arising from Russia’s “unjustified act of war” in Ukraine, the prosecutor’s office said.
The announcement comes hours after the German prosecutor general’s office launched an investigation into possible war crimes committed by Russian forces in Ukraine.The Spanish justice system’s investigation “aims to determine the criminal nature of the facts and to carry out as many investigations as necessary”, the prosecutor’s office said.”The aggression suffered by the sovereign nation of Ukraine is an unjustified act of war that is not covered by any international norms” and from which “other serious violations of international humanitarian law arise”, the public prosecutor’s office wrote in its decree.”The actions of the Russian Federation and its leaders do not take place under any legal cause or circumstance”, the prosecutor’s office adds, stating that Spanish justice, by virtue of the principle of universal jurisdiction, is competent to investigate acts committed “outside national territory that may be qualified (criminally) in accordance with Spanish law”.German Justice Minister Marco Buschmann had told the Passauer Neue Presse newspaper that European justice ministers had agreed on procedures to document possible war crimes committed in Ukraine.The International Criminal Court (ICC) in The Hague has also taken up similar suspicions and has been investigating charges of war crimes and crimes against humanity since last week.Russia invaded Ukraine on 24 February and is waging war across the country, shelling major cities. More than two million people have already fled the country, according to the UN.15:01

Mothers vaccinated against COVID during pregnancy may reduce…