Ukrainian servicemen load a truck with the FGM-148 Javelin, an American man-portable anti-tank missile provided by US to Ukraine, Boryspil airport in Kyiv, February 11, 2022.

Despite Moscow denying the accusations, there are fears similar massacres could be discovered in the coming days.

Ukraine is calling for more weapons from NATO and stronger Western sanctions against Russia.

Follow our latest updates from the war in our blog below, or watch TV coverage in the video player, above.

‘Weapons, weapons, weapons’: Ukraine’s Foreign Minister Dmytro Kuleba has called on NATO to provide Kyiv with all the weaponry it needs to fight Russia, as alliance ambassadors meet for a second day in Brussels.Failure to agree an embargo on Russian oil is costing Ukrainian lives, Ukraine’s president said in his latest address early on Thursday. Volodymyr Zelenskyy argued that Moscow was making so much money from oil exports that it did not need to take peace talks seriously.“In every barrel of oil, there is Ukrainian blood,” Ukrainian MP Oleksiy Goncharenko told Euronews, calling for an immediate end to business with Russia after visiting Bucha.The EU has yet to reach agreement as member states ponder more sanctions. EU Council President Charles Michel has said moves against Russian oil and gas are likely to be needed eventually.The EU has spent 35 times more on buying Russian energy than it has on weapons for Ukraine since the start of the war, the bloc’s foreign policy chief Josep Borrell said on Wednesday.The UK and the US announced new sanctions on Wednesday. Britain says it will end imports of Russian oil and coal by the end of the year and ban investment in Russia. Ukrainian authorities say nearly 5,000 people were evacuated from combat areas on Wednesday. Officials have been urging residents of eastern regions to evacuate in the face of an impending Russian offensive.The UN General Assembly is due to vote on Thursday on a US-initiated resolution to suspend Russia from the world organization’s leading human rights body.Zelenskyy has accused Russia of trying to hide evidence of war crimes to interfere with an international investigation. Mariupol City Council claimed on Wednesday that Russia is deploying mobile crematoria to burn bodies.

President Zelenskyy will have talks in Kyiv on Friday with European Commission President Ursula von der Leyen, according to a Ukrainian presidential spokesman.

Sergii Nykyforov said on national television that other details of the talks would not be announced for security reasons.

A European Union spokesman said on Tuesday that the EU’s top diplomat, Josep Borrell, would also travel to Kyiv this week with the Commission president.

Ukraine’s Foreign Minister Dmytro Kuleba has called on NATO to provide Kyiv with all the weaponry it needs to fight Russia.

“My agenda is very simple. It has only three items on it. Its weapons, weapons, and weapons,” Kuleba said as he arrived at NATO headquarters in Brussels on Thursday.

NATO foreign ministers are meeting for a second day of talks to consider how best to continue supporting Ukraine.

“We know how to fight. We know how to win. But without sustainable and sufficient supplies requested by Ukraine, these wins will be accompanied by enormous sacrifices,” Kuleba said. “The more weapons we get and the sooner they arrive in Ukraine, the more human lives will be saved.”

He urged Germany in particular to go further, and speed the dispatch of sorely needed equipment and arms, saying that “while Berlin has time, Kyiv doesn’t”.

“I have urged allies to provide further support of many different types of systems, both light weapons but also heavier weapons,” he said. NATO’s chief added that NATO countries acting individually are supplying many kinds of arms and other support to Ukraine but that the 30 allies can do more.

“Ukraine is fighting a defensive war, so this distinction between offensive and defensive weapons doesn’t actually have any real meaning,” Stoltenberg said, insisting that it is also important for NATO not to be dragged into a wider war with Russia.

“NATO is not sending troops to be on the ground. We also have a responsibility to prevent this conflict from escalating beyond Ukraine, and become even more deadly, even more dangerous and destructive,” he said. 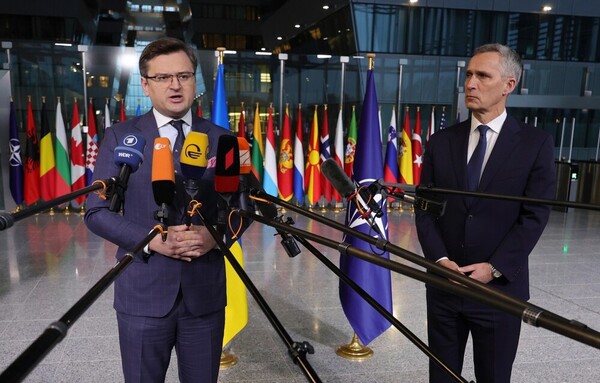 Russia is continuing to prepare for an attack to gain full control over the eastern breakaway regions of Donetsk and Luhansk as well as the besieged southern port of Mariupol, the general staff of the Ukrainian armed forces said late on Wednesday.

Ukrainian authorities say they cannot help people evacuate from the eastern front line town of Izyum or send humanitarian aid because it is completely under Russian control as the east sees the worst fighting.

At least five people were killed by Russian shelling Wednesday in the Donbas’ Donetsk region, according to Governor Pavlo Kyrylenko, who urged civilians to leave for safer areas.

In the Luhansk region of the Donbas, Russian bombardment set fire to at least 10 multi-story buildings and a mall in Severodonetsk, the regional governor reported.

AFP journalists noted regular shelling on Wednesday in the city which had 100,000 inhabitants before the conflict. Severodonetsk is the easternmost city held by the Ukrainian army in the Donbas, very close to the front line.

In Vougledar, a town of 15,000 people 50 km southwest of Donetsk, two civilians were killed and five injured in the shelling of an aid distribution centre, Kyrylenko said.

A little further, Ukrainian forces were preparing to defend a road linking Izyum, recently taken by Russian forces, to the neighboring cities of Slovyansk and Kramatorsk, the de facto capital of the east controlled by Kyiv.

Ukrainian forces have been fighting Russia-backed separatists in the Donbas since 2014. Ahead of its February 24 invasion, Moscow recognised the Luhansk and Donetsk regions as independent states.

Russian forces also attacked a fuel depot and a factory in the Dnipropetrovsk region, just west of the Donbas, authorities said.

Ukrainian Deputy Prime Minister Iryna Vereshchuk also called on Wednesday the civilian population of eastern regions, including the large city of Kharkiv, to evacuate while there was still time, or “risk death”. 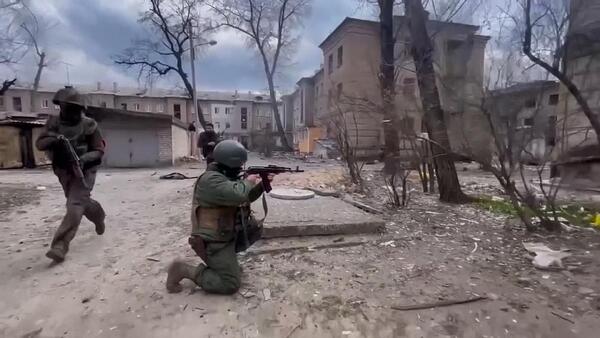 Russian state television on Wednesday broadcast images of what it said were rebels fighting in the eastern region of Luhansk.

Ukrainian President Volodymyr Zelenskyy has accused Russia of trying to hide the evidence of war crimes to interfere with the international investigation.

“We have information that the Russian troops have changed tactics and are trying to remove the dead people, the dead Ukrainians, from the streets and cellars of territory they occupied. This is only an attempt to hide the evidence and nothing more,” Zelenskyy said.

He also said thousands of people are now missing, either dead or deported to Russia.

Zelenskyy also urged Russian citizens not to be afraid to protest the war.

“If you have even a little shame about what the Russian military is doing in Ukraine, then for such Russian citizens this is a key moment: You have to demand – just demand – an end to the war,” he said.

On Monday, Morawiecki ridiculed the French leader’s several hours of phone calls with Putin, saying that they achieved nothing.

Some fear the comments from Poland might destabilise unity of the European Union as it hopes to stand unified in the face of Putin’s aggression in Ukraine.

Macron told TF1 broadcaster’s evening news that he takes full responsibility for speaking to Putin “in the name of France to avoid the war and to build a new architecture for peace in Europe several years ago.”

Macron is standing for re-election in France in polls that begin Sunday.

EU countries yet to reach agreement on fresh sanctions

EU member states are still trying to overcome their differences as they look to approve a fifth round of sanctions against Russia.

The measures proposed by the European Commission include a ban on coal imports and the closure of European ports to Russian ships.

European Council President Charles Michel has said sanctions on Russian oil and gas are likely to be needed eventually.

Germany and Austria seem to be moving towards a similar conclusion, but Hungary — which has a close relationship with Vladimir Putin — is now the most reluctant country to impose sanctions on oil and gas.

EU ambassadors will meet on Thursday in an attempt to bridge the gaps and reach a final agreement. 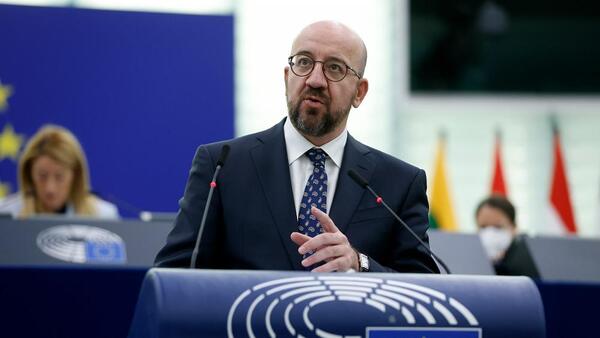 US and UK hit Russia with new sanctions

The US rolled out a new wave of financial sanctions on Wednesday against Russia and the UK quickly followed suit.

The UK announced asset freezes against major banks, a ban on British investment in Russia and a pledge to end dependency on Russian coal and oil — but not gas — by the end of the year.

The EU is due to announce a fifth wave of sanctions against Russia soon. 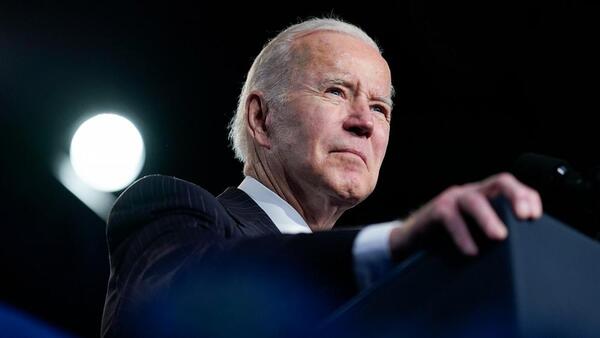 The US and UK rolled out new sanctions against Russia on Wednesday, with Europe promising a fifth round of sanctions soon.

‘In every barrel of oil, there is Ukrainian blood’, Ukrainian MP says

Ukrainian lawmaker Oleksiy Goncharenko called for an immediate end to business with Russia after he visited Bucha.

“In every barrel of oil, there is Ukrainian blood,” he told Euronews. The member of Ukraine’s parliament added that he saw 50 bodies in the city, including one child.

“I am afraid about what is happening in Mariupol is even worse,” he added. 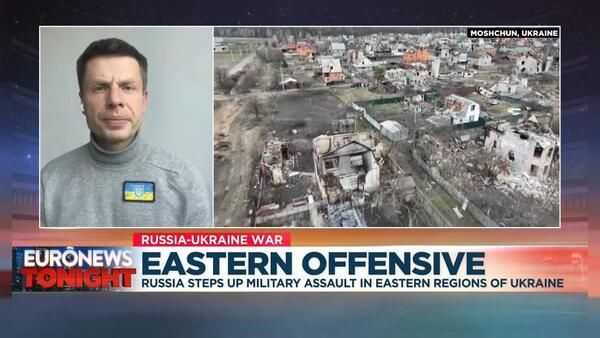 ‘In every barrel of oil, there is Ukrainian blood’, Ukrainian MP says

A member of Ukraine’s parliament told Euronews that the situation in Mariupol could be even worse than the Russian atrocities in Bucha.

Ukraine’s President Volodymyr Zelenskyy has said he is grateful for Western sanctions but argues they don’t go far enough.

In his latest video address released early on Thursday, he called on Western politicians to agree quickly on an embargo of Russian oil, complaining that their failure to do so was costing Ukrainians their lives.

Zelenskyy said Moscow was making so much money from oil exports that it did not need to take peace talks seriously and called on the “democratic world” to shun Russian crude.

He said some politicians were “unable to decide how to limit the flow of petrodollars and oil euros to Russia so as not to put their own economies at risk”.

The president also said he would continue to insist Russian banks be completely blocked from the international finance system.

The US announced new sanctions against Russia on Wednesday including a move to ban Russian oil imports. New UK measures include a pledge to end dependency on Russian coal and oil by the end of 2022.

EU member states are still trying to overcome their differences as they look to approve a fifth round of sanctions. The Commission has proposed a ban on coal imports and the closure of European ports to Russian ships.

“Measures on oil and even gas will also be needed sooner or later,” European Council President Charles Michel said on Wednesday.

Hungary, which has a close relationship with Vladimir Putin, is now the most reluctant country to impose sanctions on oil and gas.