Efforts are still ongoing to rescue civilians trapped for weeks in a Mariupol steel plant with at least 50 more evacuated on Friday. Meanwhile the US has promised another $150 million military aid package to Ukraine.

The leaders of the G7 nations will hold a video meeting with President Zelenskyy on Sunday, and the United Nations has unanimously adopted a statement expressing “strong support” for Secretary General Antonio Guterres’ efforts to find a peaceful solution to the “dispute” in Ukraine. The statement does not mention the words “war”, “conflict” or “invasion.”

Follow our Saturday live blog below, or click the video player above for the latest television coverage.

Russia held a dress rehearsal on Saturday for the military parade to commemorate Victory Day on 9 May, when the country marks the defeat of Nazi Germany during World War II.

This year’s Victory Day, which falls on Monday, won’t just honor a conflict that ended 77 years ago. Many Russians will be thinking about the thousands of troops in neighboring Ukraine. Signs of support for the military have grown across the country since the Kremlin launched an invasion of neighbouring Ukraine on 24 February, with the letter “Z” appearing on billboards and signs in the streets and subways, and on television and social media.

On Saturday, an RS-24 Yars intercontinental ballistic missile rolled through Red Square as part of the rehearsal in Moscow, with warplanes and helicopters flying overhead, troops marching in formation and self-propelled artillery vehicles rumbling past. 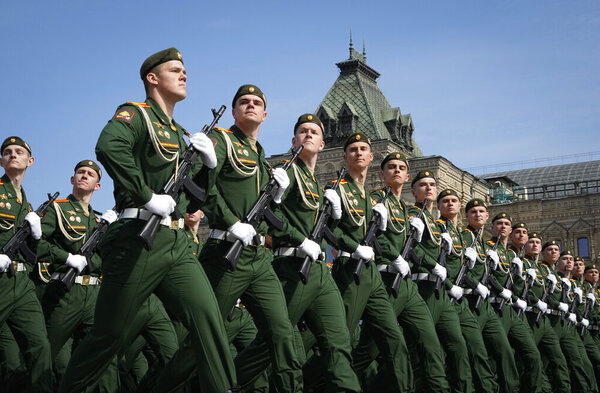 America’s first lady Jill Biden praised the Romanian government and relief organizations for the range of humanitarian aid they are providing to Ukrainians who are fleeing Russia’s war against their country. She called the show of solidary “amazing” but also “just the beginning.”

Biden delivered her sober assessment on Saturday at the end of an hour-long briefing at the US Embassy in Bucharest on the massive relief effort.

She was told that Romania had “welcomed” nearly 900,000 refugees from Ukraine since Russia invaded its neighbor on 24 February, but most have since moved on to other countries. Women and children are the bulk of the refugees.

She also applauded Romanians for their generosity.

“The Romanian people are amazing, to welcome all these refugees into their homes and offer them food and clothing and shelter and give them their hearts,” she added. “I think the world knows that.”

Around 7,000 Ukrainians cross the border and arrive in Romania daily, said Pablo Zapata, the Romanian representative for the UN refugee agency.

UN and other agencies and the Romanian government are providing refugees with a range of services, including food, shelter, education, health and mental health care, and counseling, among other services.

Authorities in the pro-Russian separatist region of Transnistria in Moldova, say there were four explosions near a former airfield in a village close to the Ukraine border.

The blasts happened Friday evening around 9:40pm local time, and no casualties were reported.

The village of Voronkovo — Varancau in Romanian — is located about five kilometers from the Ukrainian border.

Several incidents have taken place in the region recently, including shootings near an arms depot and series of explosions, raising fears of a spillover from the current conflict in Ukraine .

Authorities say a team of investigators is at the scene of the explosions, and noted that “two bombs were dropped by a drone” in the same village on Thursday evening — again, no casualties were reported in that blast either.

The self-proclaimed “republic” of Transnistria seceded from Moldova in 1992, after a short war against Chisinau. Since then, around 1,500 Russian soldiers have been stationed there.

In recent weeks, fears that the conflict in Ukraine could spill over into Transnistria have grown after a Russian general claimed that the Kremlin’s offensive in Ukraine was aimed at establishing a corridor to this pro-Russian separatist region.

Rescuers are trying to evacuate more civilians from tunnels beneath a sprawling steel mill in Mariupol as Ukrainian fighters make their last stand to prevent Moscow’s complete takeover of the strategically important port city.

Dozens of people were evacuated Friday from the Azovstal plant and handed over to representatives of the United Nations and the International Committee of the Red Cross, Russian and Ukrainian officials said. The Russian military said the group of 50 included 11 children.

Russian officials and Ukrainian Deputy Prime Minister Iryna Vereshchuk said the evacuation efforts would continue into the weekend. The latest evacuees followed roughly 500 other civilians who got out of the plant and city in recent days.

The fight for the last Ukrainian stronghold in a city reduced to ruins by the Russian onslaught appeared increasingly desperate. And there was growing speculation that President Vladimir Putin wants to finish the battle for Mariupol so he can present a triumph to the Russian people in time for Monday’s Victory Day, the biggest patriotic holiday on the Russian calendar.

President Joe Biden on Friday authorized the shipment of another $150 million (€142 million) in military assistance for Ukraine for artillery rounds and radar systems in its fight against Russia’s invading forces.

Biden said the latest spending means his administration has “nearly exhausted” what Congress authorized for Ukraine in March and called on lawmakers to swiftly approve a more than $33 billion spending package that will last through the end of September.

“We are sending the weapons and equipment that Congress has authorized directly to the front lines of freedom in Ukraine,” Biden said in a statement. “US support, together with the contributions of our Allies and partners, has been critical in helping Ukraine win the battle of Kyiv and hinder Putin’s war aims in Ukraine.”

Italy impounds luxury yacht that might belong to Vladimir Putin

The Italian finance minister has adopted a decree that will impede a mega-yacht from sailing away from a Tuscan port, after investigation indicated the luxury vessel Scheherazade has links to “prominent elements of the Russian government.’’

The finance ministry also said in statement Friday evening that the probe, carried out by Italy’s financial police corps, found “significant economic business links of the beneficial owner” of the Scheherazade as well to other subjects included in a list issued in 2014 as part of European Union measures prompted by Russia’s annexation of Crimea from Ukraine.

There have been fears that the 140-meter (459-foot) long yacht, which has been in dry dock in the port of Marina di Carrara, was preparing to sail out of Italian waters soon. Based on the Italian investigation, Minister Daniele Franco adopted a “freezing decree’’ regarding the yacht, which flies the flag of the Cayman Islands and which had “long been under the attention of the authorities,’’ the statement said.

A few weeks after Russia’s war against Ukraine began, Ukrainian President Volodymyr Zelenskyy, in a speech to Italian lawmakers, urged Italy to continue freezing assets of Russian oligarchs and officials. He cited by name the Scheherazade, which, according to some reports, belongs to Russian President Vladimir Putin.

The Italian ministry statement didn’t identify the boat’s owner nor specify who are the “prominent” elements of the Russian government. But it said the “actual owner” of the Scheherazade should be included in the 2014 EU sanctions list.

The latest intelligence assessment from the British Ministry of Defence says that the war in Ukraine is taking a heavy toll “on some of Russia’s most capable units and most advanced capabilities”, and that it will take “considerable time” and expense for Russia to rebuild its armed forces after this conflict.

The MoD also says it will be “particularly challenging to replace modernised and advanced equipment due to sanctions restricting Russia’s access to critical microelectronic components.”

Key points to know for Saturday:

The latest UK military intelligence assessment says the conflict in Ukraine is taking a heavy toll on some of Russia’s most capable units and most advanced capabilities.The US government has authorised the shipment of another $150 million (€142 million) in military assistance for Ukraine for artillery rounds and radar systems.Italy will impound a mega-yacht from sailing away from a Tuscan port, after investigations indicated the luxury vessel Scheherazade has links to “prominent elements of the Russian government.’’At least 50 civilians were evacuated from the steel plant in Mariupol, said Ukraine’s Deputy Prime Minister Iryna Vereshchuk in a post on Telegram.Members of the United Nations Security Council, including Russia, have agreed on a statement expressing “strong support” for Secretary-General Antonio Guterres’ efforts to find a peaceful solution to the “dispute” in Ukraine.

Live: No ceasefire or concessions, Ukraine said, as fighting in Donbas intensifies