Ukrainian firefighters extinguish a blaze at a warehouse after a bombing in Kyiv, Ukraine, Thursday, March 17, 2022.

Friday is the 23rd day of war in Ukraine, after the invasion launched by Moscow at the end of February.

Rescue workers are still trying to reach hundreds of people they think may have survived a Russian attack on a Mariupol theatre being used as a shelter.Reports say around 130 people have been rescued so far but more than a thousand were thought to be inside at the time.Air raid sirens sounded in the western city of Lviv just before dawn with the city’s mayor saying the airport was targeted with missiles. Russia’s will not ask for a UN vote on its resolution about the humanitarian situation in Ukraine, which was criticised by Western countries for not mentioning Russia’s responsibility for invading Ukraine.The World Health Organisation says they’ve verified 43 attacks on hospitals and health facilities by Russian forces in Ukraine. US President Joe Biden will speak to his Chinese counterpart Xi Jinping at 2pm CET to discuss Russia’s invasion of Ukraine.

The World Health Organization says it has catalogued dozens of attacks by Russian forces on hospitals and health clinics in Ukraine.

WHO Director General Tedros Adhanom Ghebreyesus told the UN Security Council that they’ve verified 43 attakcs on hospitals and other health facilities, with 12 people killed and 34 injured.

In a virtual briefing, Tedros said “the disruption to services and supplies is posing an extreme risk to people with cardiovascular disease, cancer, diabetes, HIV and TB, which are among the leading causes of mortality in Ukraine.”

The WHO chief said displacement and overcrowding caused by people fleeing fighting are likely to increase the risks of diseases such as COVID-19, measles, pneumonia and polio.

Russia’s ambassador at the United Nations says he won’t ask for a vote on Friday on a Russian resolution about the humanitarian situation in Ukraine.

The resolution had been sharply criticised by Western countries for making no mention of Russia’s own responsibility for the war against its neighbour, and causing the humanitarian crisis in the first place.

Ambassador Vassily Nebenzia told the UN Security Council late Thursday that Russia decided at this stage not to seek a vote because of pressure from the United States and Albania on other UN members to oppose it, but he stressed that Moscow is not withdrawing the resolution.

Nebenzia said Russia plans to go ahead with a council meeting Friday to discuss again its allegations of US “biological laboratories” in Ukraine, backing the claim with new documents. His initial charge was made without any evidence and repeatedly denied by US and Ukrainian officials.

US Ambassador Linda Thomas-Greenfield responded to Nebenzia’s announcement by saying “their farcical humanitarian resolution […] was doomed to fail.”

“We know if Russia really cared about humanitarian crises, the one that it created, it could simply stop its attacks on the people of Ukraine” she said.

“But instead, they want to call for another Security Council meeting to use this council as a venue for its disinformation and for promoting its propaganda.” 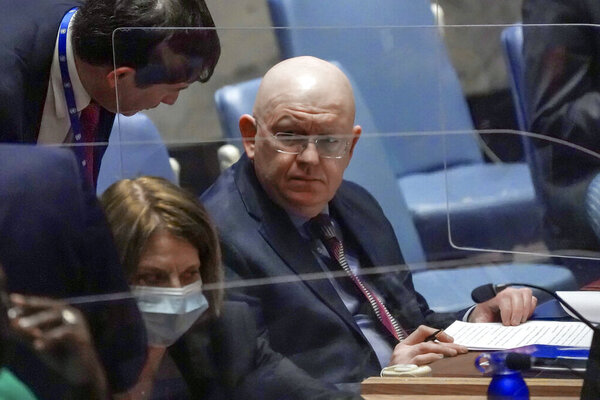 Russia Ambassador Vassily Nebenzia, right, confers during a meeting of the United Nations Security Council on the humanitarian crisis in Ukraine, Thursday March 17, 202207:05

Residents of the western Ukraine city of Lviv have been woken by air raid sirens just before dawn on Friday morning in an attack that appeared to target the airport.

Thick clouds of smoke were visible Friday morning towards the area of the airport, and mayor Andriy Sadovy wrote on his Facebook account that “missiles hit the Lviv airport area” but did not directly hit the airport itself.

Last Sunday the Russian army bombed a Ukrainian military base near Lviv although the city has been spared fighting so far, and has become a last staging post for many refugees fleeing west into Poland just a short distance away.

Italy’s culture minister said his country will rebuild Mariupol theatre, which was badly damaged in a Russian bombing earlier this week.

Writing on Twitter, Dario Franceschini said that a proposal he made to the cabinet was approved, to offer Ukraine the “resources and means to rebuild it as soon as possible.”

“Theatres of all countries belong to the whole humanity” he added.

Paul Pogba: What do we know about the extortion…