Tensions are rising after the visit of two top US officials to Kyiv late on Sunday, with Russia unleashing a string of attacks Monday against rail and fuel installations deep inside Ukraine, and far from the front lines.

Meanwhile, Russia’s top diplomat warned against provoking World War III, with the West offering more military assistance to Ukraine, and said the threat of a nuclear conflict “should not be underestimated.”

Follow our blog below to see how events unfolded on Tuesday 26 April:

UN Secretary-General Antonio Guterres used a visit to Moscow to call for an independent investigation into possible war crimes. Speaking at a press conference with Russia’s Foreign Minister Sergei Lavrov Guterres said “I am concerned about the repeated reports of violations of international humanitarian and human rights law and possible war crimes.”

Russia has threatened the UK with a “proportional response,” following comments by the British defence secretary that it would be acceptable for Ukrainian forces to attack military targets on Russian soil.

Representatives from more than 40 countries are meeting in Germany to discuss Ukraine-related defence issues. US defence secretary Lloyd Austin pledged that Ukraine’s allies will “keep moving heaven and earth” to help Kyiv.

Germany set to authorise the delivery of “Cheetah” type tanks to Ukraine , a major turning point in the cautious approach Berlin has taken to sending military supplies to Ukraine.

Threat of a nuclear conflict “should not be underestimated,” says Russia’s top diplomat.

Russia unleashed a string of attacks against rail and fuel installations deep inside Ukraine on Monday.

The US is pushing to get more weaponry into Ukraine, having approved a $165 million sale of ammunition and more than $300 million in financing.

The Bulgarian government says Russia’s Gazprom will suspend its gas deliveries from Wednesday, citing Bulgarias refusal to comply with the supplier’s new requirements.

Following the introduction of sanctions against Russia for its invasion of Ukraine, the Kremlin warned EU countries that their gas supply would be cut off if they did not pay in rubles.

Western countries refused to do so, saying they could continue to pay in euros or dollars.

“All deliveries to customers are made according to their request,” assured the Polish company.

The Polish government has also said it is ready to deal with any supply disruptions from Russia, with Climate Minister Anna Moskwa writing on Twitter “there will be no shortage of gas in Polish homes.”

Poland’s PM  Mateusz Morawiecki said gas storage facilities were 76% full and Poland was ready to “get gas from all other possible sources”.

Zelenskyy: ‘Russia put the world on brink of catastrophe’ in Chernobyl

Ukrainian President Volodymyr Zelenskyy on Tuesday accused Russia of having put the world “on the brink of catastrophe” by occupying the Chernobyl power plant at the start of its invasion of Ukraine.

“The world was once again on the brink of catastrophe” Zelenskyy told reporters at a joint press conference with the head of the International Atomic Energy Agency IAEA in Kyiv.

“For the Russian army the Chernobyl zone and the Chernobyl plant were like normal territory for the conduct of military operations” Zelenskyy said.

Russian President Vladimir Putin told UN chief Antonio Guterres on Tuesday that he still believed in a positive outcome to negotiations with Ukraine, despite the ongoing fighting between the two countries.

“I hope that we will reach a positive result,” he said during his meeting with Guterres in the Kremlin.

During those talks, Kyiv had proposed an international agreement establishing countries that would guarantee its security.

In exchange, Ukraine would accept a “non-nuclear” and neutral status, renounce NATO membership, and agree not to host foreign military bases on its territory — and exclude issues about Crimea and Donbas from the negotiating table for the time being.

After those initial Istanbul talks, Moscow redeployed its troops from northern Ukraine near the capital Kyiv, to positions in the east of the country instead.

Slide in Singapore non-oil exports slows to 8.9% drop in…

However, the negotiations were severely hampered by the discovery of numerous bodies in Ukrainian areas occupied by the Russian army before its withdrawal, notably in the town of Bucha. Ukraine accuses Moscow of killing civilians, which the Kremlin strongly denies.

Mr Putin said on Tuesday that the Russian army had “no connection” with the “provocation” in Bucha.

During his meeting with the Russian leader, Antonio Guterres reiterated his call for the UN and Moscow to work together to establish humanitarian corridors and help civilians in Ukraine.

In a statement, the UN said Vladimir Putin had agreed “in principle” to the involvement of the UN and the International Committee of the Red Cross in the evacuation of civilians trapped at the Azovstal industrial site in the besieged Ukrainian port of Mariupol.

According to the source, discussions will continue between the UN Office for the Coordination of Humanitarian Affairs and the Russian Defence Ministry. 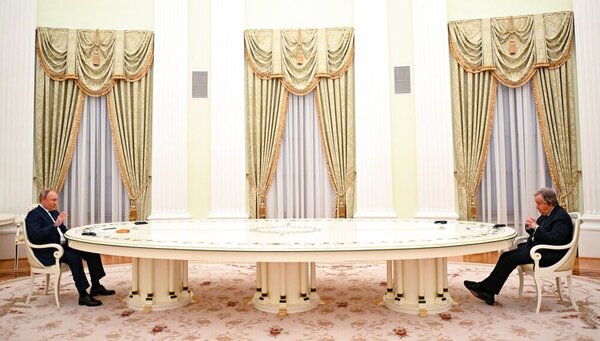 Austin said after meeting allies and partners at the United States’ Ramstein Air Base in Germany on Tuesday that, since Russia began the invasion, its land forces have sustained “pretty substantial” casualties, as well as lost a lot of equipment and used a lot of precision-guided munitions.

He said that “they are, in fact, in terms of military capability, weaker than when they started, and … it’ll be harder for them to replace some of this capability as they go forward because of the sanctions and the trade restrictions that have been placed on them.”

Austin reiterated that “we would like to make sure, again, that they don’t have the same type of capability to bully their neighbors that we saw at the outset of this conflict.”

He criticised Russian Foreign Minister Sergey Lavrov’s warning that the threat of a nuclear conflict “should not be underestimated.”

Austin said that “it’s unhelpful and dangerous to rattle sabers and speculate about the use of nuclear weapons.” 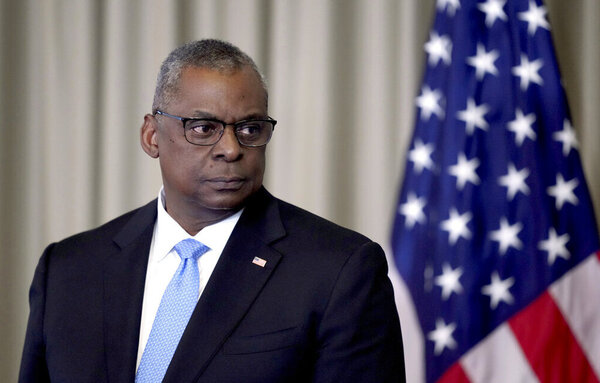 US Secretary of Defense, Lloyd Austin, attends a press conference after the meeting of the Ukraine Security Consultative Group at Ramstein Air Base in Ramstein, Germany, Tuesday, April 26, 2022./ AP18:52

The Ukrainian Foreign Ministry has said that it “resolutely supports Moldova’s territorial integrity,” following a series of explosions in the country’s Moscow-backed separatist region of Trans-Dniester.

In a statement released on Tuesday, it said: Ukraine “resolutely supports Moldova’s territorial integrity within its internationally recognized borders and condemns attempts to draw the Trans-Dniester region of Moldova into the full-fledged war unleashed by Russia against Ukraine.

The ministry described Tuesday and Monday’s attacks on an administrative building in Tiraspol, the centre of the separatist Trans-Dniester province of Moldova, along with explosions that hit broadcast antennas and other facilities in the region, as concerning.

Their statement follows a Russian officer’s comments about Moscow’s intention to fully take control of Ukraine’s south and build a land corridor to Trans-Dniester.

Russia has reportedly halted gas supplies to Poland, as tensions between Moscow and Europe escalate, according to the Polish news website Onet.pl.

While the report cited Polish government sources and the country’s national gas company PGNiG, officials are yet to confirm the news.

In a tweet, Poland’s minister of climate and environment, Anna Moskwa, said the country has enough gas in storage, although she stopped short of confirming the report.

European gas prices surged as much as 17% after the report, according to Bloomberg.

Ukraine’s Prosecutor General tells Euronews that it’s “time to punish” those at the top of Moscow’s regime and investigators want “a verdict in a Ukrainian court”. 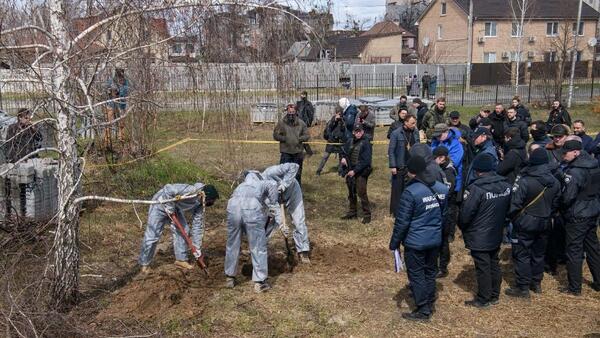 Live: Ukraine claims it destroyed about one-third of Russia’s…

COVID-19: US to reopen borders to vaccinated passengers from…