Two British men and a Moroccan national captured while fighting in the Ukrainian army have been sentenced to death by Pro-Russian officials.Zelenskyy described the battle for Sievierodonetsk as the most difficult Ukraine has seen so far. He said its outcome would decide the fate of the Donbas region. Russian bombardment pushed Ukrainian troops back from Sievierodonetsk, says the Luhansk regional governor. Zelenskyy told US business leaders that ‘the world is supposed to’ weaken Russia. Russian FM said Moscow was willing to open corridors to allow grain exports from Ukraine, but said the country must first de-mine the Black Sea. Poland’s PM criticised European leaders’ calls with Putin, likening the Russia leader to Adolf Hitler. Ukraine has appealed for long-range western weapons, saying it could ‘clean up’ Sievierodonetsk in days with them. Ukrainian forces claim to have recaptured territory near Kherson controlled by Russia. This could not be independently verified. An agreement on exporting Ukrainian grain is yet to be reached between Ukraine and Russia. Both sides are blaming one another. UN head warned that Russia’s invasion of Ukraine is ‘threatening to unleash an unprecedented wave of huger and destitution’.

Ukraine disposes of shells and mines from Kyiv farms

Ukrainian military has been blowing up and removing shells and mines removed from farm fields in the Kyiv vicinity.

“I have a well-founded suspicion that Russians deliberately mined not only roads and not only bridges but also our fertile lands. Evidence of this is in the field, mined before they escaped from here,” he said.

Yembakov reported that a tractor had exploded after hitting a mine in a field last week, but no one was hurt.

There are fears that up to 30 per cent of Ukraine’s farmland could be affected by mines. 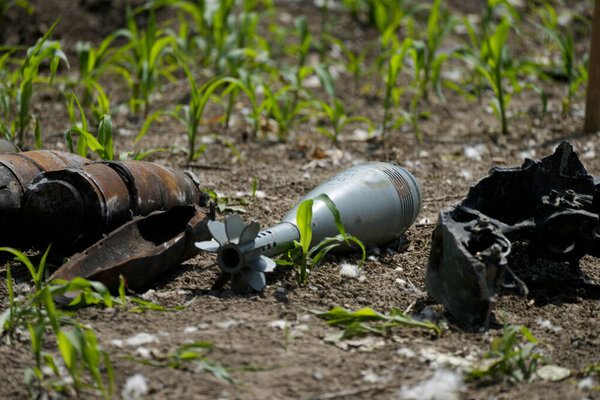 Unexploded shells and other weaponry is displayed by a Ukrainian specialised team searching for them in a field on the outskirts of Kyiv, Ukraine, Thursday, June 9, 2022.17:59

Ukraine is fighting for ‘every house and every street’ in Severodonetsk, Ukrainian commander says

The battle for Sievierodonetsk is being waged house to house, says a Ukrainian commander.

Petro Kuzyk, commander of the Svoboda (Freedom) National Guard battalion, said Ukrainian fighters hope for the delivery of heavy weapons that might “turn the tide,”

He added that street fighting in the small industrial city in eastern Ukraine was at times raging under heavy Russian artillery barrages that endangered troops on both sides.

“We fight for every house and every street,” Kuzyk told national television, describing fighting in which Ukrainian fighters had gone from “blind defence to small counter-offensives in some areas.

The British government says it is “deeply concerned” by the death sentences handed out to Britons Aiden Aslin and Shaun Pinner, who were captured while fighting for Ukraine.

British Foreign Secretary Luz Truss condemned the sentencing as a “sham judgment with absolutely no legitimacy.”

Prime Minister Boris Johnson’s spokesman Jamie Davies said that under the Geneva Conventions, POWs are entitled to immunity as combatants.

Two British men and a Moroccan national have been sentenced to death after they were captured by Russian forces fighting for the Ukrainian army, Russian state media is reporting.

“The Supreme Court of the Donetsk People’s Republic sentenced Britons Aiden Aslin and Shaun Pinner and Moroccan Brahim Saadoun to death, accused of taking part in the fighting as mercenaries,” the official Russian news agency TASSsaid.

British Prime Minister Boris Johnson has warned against any attempt on the part of the West to encourage Ukraine to accept a “bad” compromise with Russia, judging that it would be “morally repugnant”.

“To encourage a bad peace in Ukraine is to encourage Putin and to encourage everyone in the world who thinks that aggression pays,” said the leader in a speech in Blackpool, in the northwest of England.

“That would be a mistake and would open the door to more conflict, more instability, more uncertainty in the world and therefore more economic hardship,” he added.

He said he “knows that some, not in this country but elsewhere, feel that the price of supporting the Ukrainians is now too high and that they should be encouraged to accept what Putin is asking for.”

“Abandoning the Ukrainians would be morally repugnant,” he continued.

Vladimir Putin “is never going to succeed in subjugating Ukraine and the sooner he understands that the better, and he must not be allowed to achieve partial success by swallowing up part of the country as he has done before and declare a ceasefire,” he insisted.

The Premier League has suspended its €50 million contract with Russian broadcaster Match TV over the country’s invasion of Ukraine.

A deal with Russian media group Rambler, which had held the broadcasting rights for the English championship until the end of the 2021-22 season, was suspended in March and replaced by the Match TV contract.

The deal with Match TV, which is owned by energy giant Gazprom, was for the 2022 to 2028 seasons.

Sievierodonetsk mayor Oleksandr Stryuk has said some 10,000 civilians who are trapped in the city cannot be evacuated to safety, amid heavy fighting.

Intense battles have raged for days in the southern Ukrainian city, which is now the main focus of Russia’s war effort.

Stryuk said defence lines were holding out in the face of a brutal Russian artillery bombardment.

He claimed Ukrainian forces were still in control of the industrial zone and the areas surrounding Sievierodonetsk.

The situation is “difficult by manageable”, said Stryuk.

UNHCR: Ukraine war ‘one of largest displacement crises’ in the world

The United Nations High Commissioner for Refugees (UNHCR) described the war in Ukraine as one of the world’s worst refugee crises Thursday.

“The war in Ukraine has caused one of the largest human displacement crises observed in the world,” UNHCR said.

A total of 4,816,923 Ukrainians have been registered as refugees in 44 European countries since February 24, according to the latest figures published online by the UNHCR.

Many more Ukrainians have left the country in total. Up until 7 June, more than 7.3 million border crossings outside Ukraine without returns have been recorded.

2.3 million Ukrainians have returned to their country after leaving, says the UNHCR. They return to see their relatives, check the state of their properties, return to work or help others to leave, according to UN officials.

90 per cent of those who have fled are women and children. Men aged 18 to 60 are legally bound to stay and serve in the country’s armed forces.

The UN’s International Organization for Migration (IOM) also estimates that more than 8 million Ukrainians have been internally displaced due to the war.

More than half of the border crossings from Ukraine were to Poland (3.8 million, including 1.15 million registered there as refugees), according to the UNHCR.

However, other European countries have seen the most registrations. Some 780,000 in Germany, 367,000 in the Czech Republic, more than 118,000 in Spain and tens of thousands in many other countries.

“The level of solidarity towards refugees observed in (these) countries remains extraordinary”, said the UNHCR.

It praised the special protection granted to Ukrainian refugees by the Member States of the European Union.

According to the UNHCR, more than 1.1 million people have left Ukraine for Russia, and nearly 17,000 for Belarus, an ally of Moscow, since the start of the invasion. No figures were available on the number of returns to Ukraine from these two countries. 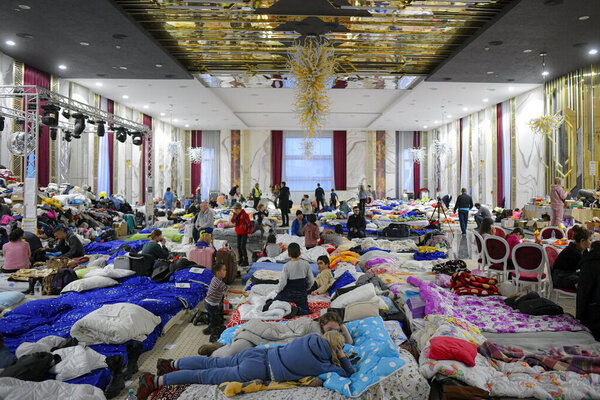 Refugees who fled the Russian invasion from neighbouring Ukraine sit inside a ballroom converted into a makeshift refugee shelter at a hotel in Suceava, Romania, Friday, March 4, 2022. (AP Photo/Andreea Alexandru, File)14:02

No agreement on Ukraine grain exports

An agreement with Turkey on exporting Ukrainian grain shipments across the Black Sea is yet to be reached, according to Kremlin spokesperson Dmitry Peskov.

Turkey has been trying to broker a Russian-Ukrainian agreement to ease the global food crisis by securing a safe passage for grain stuck in Black Sea ports.

Ankara’s efforts have been met with resistance from both sides.

Ukraine has said Russia is imposing unreasonable conditions, particularly surrounding Moscow’s calls for Kyiv to de-mine the Black Sea. Meanwhile, the Kremlin says shipments will only take place if sanctions are ended.