Ukrainian troops sit on an armoured vehicle as they move back from the front line near the city of Sloviansk in the eastern Ukrainian region of Donbas on June 1, 2022.

Follow our live updates of the Ukraine war below or watch Euronews TV's coverage in the player above.

President Zelenskyy has pleaded for Ukraine ‘s entry into the European Union, and called for EU leaders not to leave his country in a “grey zone”.Ukraine is losing up to 200 troops a day, according to a Zelenskyy aide. This is more than double previous estimates. Two Britons and a Moroccan national captured fighting Russian forces in Ukraine were sentenced to death Thursday. Their sentencing has been denounced in Ukraine and the West. They will face firing squard, reports the Russian state news agency RIA Novosti.Fierce street fighting is continuing in Sievierodonetsk, with the eastern Ukrainian city being hammered by Russian bombs. Some 10,000 civilians are trapped in the city and cannot be evacuated, says its mayor. No agreement on exporting much-needed Ukrainian grain has been reached. Both Ukraine and Russia blame one another for the impasse. Putin has compared himself to Tsar Peter the Great, paralleling their quests to capture land for Russia. Nearly 5 million Ukrainians have registered as refugees since the Russian invasion, leading the UNHCR to call the Ukraine war ‘one of the largest human displacement crises in the world.’

The Ukrainian leader urged EU leaders not to leave his country in a “grey zone” and to decide by the end of June if they grant Ukraine official EU candidate status.

Speaking via video-link from Kyiv at the Copenhagen’s Democracy Summit Friday, Zelenskyy said:

“The first thing is to finally remove this ‘grey zone’, so tempting for the Russian state (…) In the coming weeks, the European Union could take a historic step which will prove that words about the membership of the Ukrainian people to the European family are not in vain.”

He said European countries must not hesitate to cut off any relations with Russia.

“Why, if Russia cynically literally violates all essential documents of international law, are there still some who hesitate to block any relationship with such a state? (…) The European system will lose if the words are not accompanied by actions,” he warned.

The European Commission is due to deliver its opinion on the matter in the coming days, before EU leaders decide whether to grant Ukraine official candidate status at a summit on June 23-24.

“Why, if polls show that 71 per cent of Europeans consider Ukraine to be part of the European family, are there still political sceptics who are reluctant to allow us to join the European Union?” he asked.

The 27 member states are divided on the question of Ukraine’s candidacy for the EU.

While many countries, mainly in Eastern Europe, support Ukraine’s membership, some like the Netherlands or Denmark are sceptical, fearing that Ukraine is not ready.

Discussions are underway to develop a common position.

If Ukraine achieves “candidate status”, it will start a process of negotiations and potential reforms that could take years, if not decades, before it is on the verge of joining the EU.

The UN human rights office (OHCHR) says it’s concerned about the death sentences imposed by pro-Moscow rebels in Ukraine on three captured foreigners who were fighting on the Ukrainian side.

A court in the self-proclaimed Donetsk People’s Republic found two Britons and one Moroccan guilty of seeking the violent overthrow of power. The men were also convicted of mercenary activities and terrorism.

U.N. rights office spokeswoman Ravina Shamdasani noted Friday that, according to the Ukrainian military, all three were part of Ukraine’s armed forces. She said if that is the case they “should not be considered as mercenaries”

Shamdasani said that, since 2015, the office has observed that the judiciary in rebel-run separatist areas “has not complied with essential fair trial guarantees, such as public hearing, independence and impartiality of the court and the right not to be compelled to testify.”

She added that “such trials against prisoners of war amount to a war crime.”

Sievierodonetsk: ‘battles are going on for every house’, says governor

A regional governor says Ukrainian soldiers are fighting for every house in street battles in the battle for Sievierodonetsk, a key city in eastern Ukraine.

Luhansk governor Serhiy Haidai told The Associated Press (AP) Friday that Ukrainian forces have retained control of the industrial area on the edge of the city of Sievierodonetsk and also control some other sections.

He said that “battles are going on for every house and every street.”

Sievierodonetsk, the administrative centre of Luhansk province in the Donbas industrial region, has been the focus of the Russian offensive in recent weeks.

10,000 civilians are thought to be trapped inside the city.

A British MP has condemned the sentencing of two Britons to death by Russian-backed forces, saying they should be afforded rights as prisoners of war.

Aiden Aslin and Shaun Pinner, who were captured fighting Russian forces in Ukraine, were handed death penalties Thursday by a court in the self-proclaimed Donestk People’s Republic. A Moroccan student Saaudun Brahim was also sentenced.

“This is a really concerning situation,” said Labour MP for Nottingham North, Alex Norris.”These are legitimate combatants, are prisoners of war, and as such have significant rights. They should not have been tried by that tribunal that they have been, in the way that they have been.

“As a result, those rights aren’t being upheld,” he added.

The British lawmaker called on his country to make a unified response.

“I think it’s really important that we send a strong message back from this country of our unity on this,” he said.

“That these gentlemen must have their rights, and they must be treated properly as they should be under the Geneva convention.”

“Whether that’s calling in the ambassador, or whatever other channels are open, we must use all of them, and show a united front that we expect their rights to be upheld,” he said. 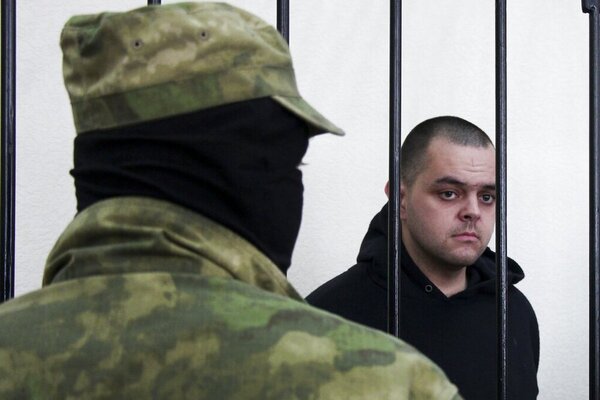 British citizen Aiden Aslin stands behind bars in a courtroom in Donetsk, in the territory which is under the Government of the Donetsk People’s Republic control, eastern Ukraine, Thursday, June 9, 2022. (AP Photo) 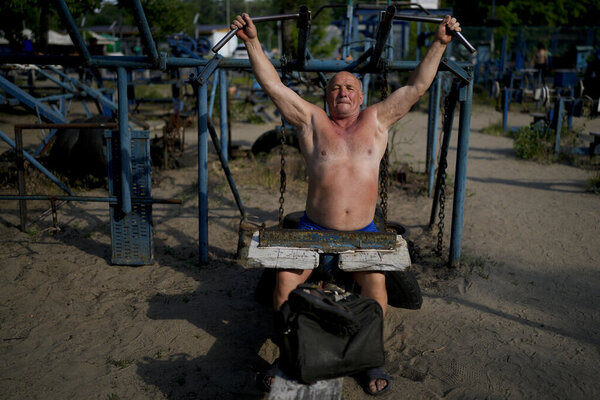 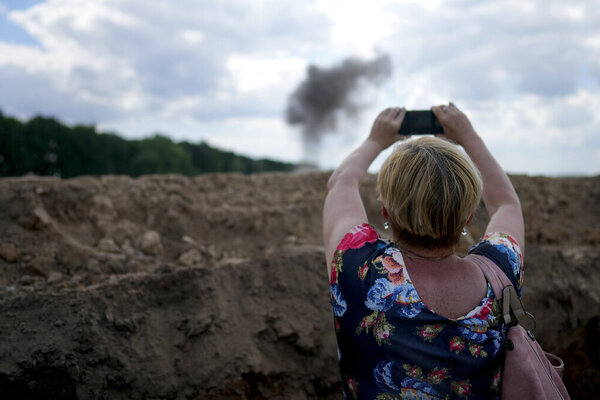 A journalist takes a picture of smoke rising from a landmine exploded by a Ukrainian specialized team working on a field to clean the area on the outskirts of Kyiv, Ukraine, Thursday, June 9, 2022. (AP Photo/Natacha Pisarenko)08:52

The West and Ukraine have denounced a pro-Moscow court’s decision to sentence three foreigners fighting for Ukraine to death, calling the proceedings a sham and violation of the rules of war.

Aiden Aslin (UK), Shaun Pinner (UK) and Saaudun Brahim (Morrocco) were handed the death penalty Thursday evening by a court in the self-proclaimed Donetsk People’s Republic, having been captured by Russian forces weeks ago.

The three men were found guilty of seeking the violent overthrow of power, an offence punishable by death in the unrecognized eastern republic. The men were also convicted of mercenary activities and terrorism.

Saadoun’s father, Taher Saadoun, told the Moroccan online Arab-language newspaper Madar 21 that his son is not a mercenary and that he holds Ukrainian citizenship.

Saadoun had been studying at National Institute of Dialectics for Space Sciences before it was destroyed in the war and he was drafted into the Ukrainian army as a translator, according to his father.

Aslin’s and Pinner’s families have said that the two men were long-serving members of the Ukrainian military. Both are said to have lived in Ukraine since 2018.

Russian state news agency RIA Novosti reported that the trio will face a firing squad. They have a month to appeal.

Ukrainian and Russian forces are still battling it out in the eastern city of Sievierodonetsk, with Kyiv claiming it has frustrated Moscow’s attacks.

“The occupiers, with the help of motorized rifle units and artillery, conducted assault operations in the city of Sievierodonetsk,” said the General Staff of the Armed Forces of Ukraine in an operational update Thursday evening.

“They were not successful; the fighting continues,” it added.

Ukrainian forces had also repelled a Russian attack on the village of Toshkivka, northwest of Sievierodonetsk, according to the General Staff.

The Ukrainian governor of the eastern Luhansk region, where Sievierodonetsk is located, said Thursday that “fierce battles” continue to engulf the city.

“It is extremely dangerous for civilians to remain, even in shelters,” he said. 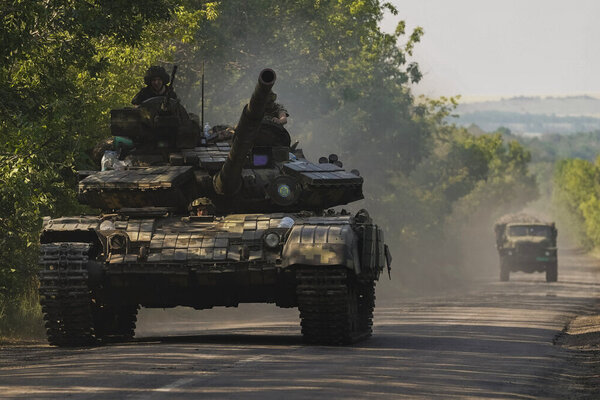 Putin compares himself to Peter the Great

Russian president Vladimir Putin compared his current actions in Ukraine to Tsar Peter the Great Thursday, who conquered swathes of eastern and central Europe in the early 18th century.

After marking the Tsar’s 350th birthday with a visit to a museum, Putin told a group of young entrepreneurs “you get the impression that by fighting Sweden he was grabbing something. He wasn’t taking anything, he was taking it back.”

In comments that were later televised, Putin compared his offensive in Ukraine with Peter’s campaign to expand the then Russian Empire.

“Apparently, it also fell to us to return [what is Russia’s] and strengthen [the country],” said the Russian leader. “if we proceed from the fact that these basic values form the basis of our existence, we will certainly succeed in solving the tasks that we face.”

Putin also noted how when Peter the Great founded Saint Petersburg, the former Russian capital, “none of the countries in Europe recognised this territory as belonging to Russia.”

“Peter the Great waged the Great Northern War for 21 years,” he said. “It would seem that he was at war with Sweden, he took something from them. He did not take anything from them, he returned [what was Russia’s].

Putin continued: “Everyone considered it to be part of Sweden. But from time immemorial, Slavs had lived there alongside Finno-Ugric peoples. It is our responsibility also to take back and strengthen. Yes, there have been times in our country’s history when we have been forced to retreat, but only to regain our strength and move forward.”

By defeating Sweden in the Great Northern War (1700-1721) Peter the Great made Russia a leading regional power and an important player in European affairs.He was also a modernising, Europe-looking leader who drew inspiration from the west to develop Russia’s army, state, church and society. Peter the Great’s shift Europewards still has an important cultural legacy today.

However, amid heighten animosity between the west and Russia over the Ukraine invasion, Moscow is downplaying Peter’s affinity for Europe and focusing on how he expanded Russian borders.

Peter I reigned first as tsar and then as emperor from 1682 until his death in 1725. 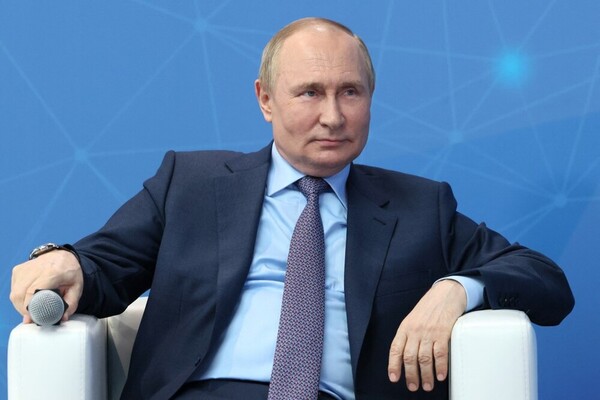 Russia may currently be getting more revenue from its fossil fuel sales than before its invasion of Ukraine, claimed one United States (US) official.

Increases in global oil and gas prices have offset the impact of important bans, US energy security envoy, Amos Hochstein, said during a senate hearing.

Russia has been able to sell more to other buyers, including major energy consumers China and India, by offering it at a discount to oil from other origins, he said.

Russia is the third-largest oil producer after the US and Saudi Arabia.

It is the world’s largest exporter of oil and petroleum products, data from the International Energy Agency (IEA) shows.

The Fed is expected to cut rates again amid conflicting economic…