The war in Ukraine is now in its seventh week, and taking on a new dimension with growing evidence of human rights atrocities by Russian troops as they retreated from the Kyiv region and other parts of the north.

As Vladimir Putin’s forces concentrate their offensive on eastern Ukraine, Kyiv forces are digging in, while NATO and the EU promise more weapons to Volodymyr Zelenskyy and Western nations keep tightening sanctions against Moscow.

Follow Monday’s events as they unfold in our blog below, or watch TV coverage in the video player above.

Austrian Chancellor Karl Nehammer will visit Moscow on Monday for talks with Vladimir Putin, the first EU leader to visit since the start of the war. In a new interview, President Zelenskyy says Ukrainians still want peace, despite the atrocities of war they have witnessed. Russia has appointed a new Ukraine war commander, General Alexander Dvornikov, a veteran of the Russian campaign in Syria. Britain’s Ministry of Defence says Russia needs to boost troop numbers with extra recruitment, due to mounting losses in the war. President Zelenskyy says Russia is targeting all of Europe with its aggression, and that stopping the invasion of Ukraine is essential for the security of all democracies.

Nehammer is travelling to the Russian capital on Monday and said that he aimed to act as a “bridge-builder” between Moscow and Kyiv.

He said he is hoping to “do everything possible to make (the war) stop” and to “ensure that steps are taken in the direction of peace”. 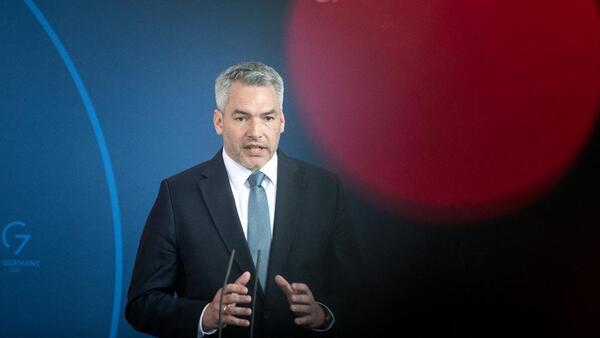 euronewsNehammer said he wants to be a “bridge-builder” between Moscow and Kyiv.

Mayor of Kyiv Vitali Klitschko repeated on Sunday night that he believes the Russian troops will attempt to capture the Ukrainian capital again.

“The fact that the enemy has withdrawn from Kyiv doesn’t mean that they have relinquished their desire to capture the capital,” he said on Telegram.

Klitschko emphasised that the possibility of Moscow trying “‘to capture Kyiv in 2 days’ again” cannot be ruled out.

Earlier, Klitschko has advised the citizens of Kyiv who fled the city to wait before returning due to uncertainties over their safety and the Kremlin’s plans for a renewed offensive.

Ukraine’s president warned his nation Sunday night that the coming week would be as crucial as any in the war.

“Russian troops will move to even larger operations in the east of our state,” Volodymyr Zelenskyy said in his nightly address.

He accused Russia of trying to evade responsibility for war crimes.

“When people lack the courage to admit their mistakes, apologise, adapt to reality and learn, they turn into monsters.”

“And when the world ignores it, the monsters decide that it is the world that has to adapt to them. Ukraine will stop all this,” Zelenskyy said.

“The day will come when they will have to admit everything. Accept the truth,” he said.

A large explosion was reported in Mykolaiv overnight on Monday, with one person injured so far.

Head of the Mykolaiv regional administration Vitaliy Kim said on Telegram that “a security guard was injured by broken glass after a big explosion”.

Also, the governor of the region that includes Ukraine’s fourth-largest city, Dnipro, said its airport was hit twice by missile attacks on Sunday.

Neither side’s military claims could be independently verified.

Russia can still count on ‘vast majority’ of its combat power, Pentagon says

The Pentagon said Russia has a clear advantage in armoured forces for its next phase in its war on Ukraine.

Press secretary John Kirby said Friday that the Russians spread themselves too thin to take the capital, but now they’re more focused on a smaller region and still have the vast majority of their combat power.

A major effort by Ukrainian defences and more Western assistance will be needed to push them back.

Fishing row: What happens if UK takes legal action against France over post-Brexit…