Finnish soldiers take part in the Army mechanised exercise Arrow 22 exercise at the Niinisalo garrison in Kankaanp'', Western Finland, on May 4, 2022.

Russia’s foreign ministry says there will be “consequences” if Finland goes ahead with its bid to join NATO. “Russia will be forced to take retaliatory steps,” the ministry said in a statement.

That comes after Finland’s leaders said on Thursday morning the Nordic nation should join NATO ‘without delay’ in light of Russia’s invasion of Ukraine.

Russia is stealing Ukrainian grain and trying to sell some of it on global markets, Ukraine’s foreign ministry claims.

Supplies of Russian gas to Europe via Ukraine will drop by a third on Thursday, says Gazprom.

12:55Would Sweden or Finland joining NATO increase the chances of the Ukraine conflict spilling over? 18:29

The top United Nations human rights body has overwhelmingly passed a resolution calling on its investigators to specifically look into possible rights abuses and violations in northern Ukraine shortly after Russia’s invasion.

In a 33-2 vote, with 12 abstentions, the Human Rights Council concluded a special session Thursday on Russia’s invasion of Ukraine also by calling on Russia to grant international human rights groups “unhindered, timely, immediate, unrestricted and safe access” to people who have been transferred from Ukraine to Russia or areas controlled by Russian forces or affiliates.

COP26: US and China announce surprise declaration to work…

Only China and Eritrea voted against the measure, which also urged the UN human rights office to report on events in Mariupol, a besieged southeastern port city where thousands of civilians are believed to have been killed. Access to the city has been virtually nonexistent for international human rights during recent fighting there.

The council called on a team of investigators known as a Commission of Inquiry to look specifically into the “events” in the Kyiv, Chernihiv, Kharkiv and Sumy regions of Ukraine in late February and early March after Russia’s invasion “with a view to holding those responsible to account.” The commission was already created to investigate rights abuses and violations generally in Ukraine.

Many atrocities in the war came to light last month after Moscow’s forces aborted their bid to capture Kyiv and withdrew from around the capital, exposing mass graves and streets and yards strewn with bodies in towns such as Bucha.

The United Nations’ refugee agency is reporting that more than 6 million people have now fled Ukraine since the start of Russia’s invasion on 24 February.

Geneva-based UNHCR also said Thursday that the number of refugees who have returned back to Ukraine, either partially or fully, has reached more than 1.6 million. It says that number reflects cross-border movements, and doesn’t necessarily indicate “sustainable” returns. The agency says it’s too early to draw conclusions about “definitive trends” on returns.

Matthew Saltmarsh, an agency spokesman, also said Thursday that a total of 2.4 million people who have left Ukraine have moved beyond Ukraine’s immediate border countries which have taken in the lion’s share of refugees from the country. Poland alone has registered more than 3.2 million people who fled Ukraine. It and other European Union member countries have open borders, making tracking where people go a complex endeavor.

On Tuesday, the UN High Commissioner for Refugees, Filippo Grandi, tweeted that the number of refugees from Ukraine had reached the same 5.7 million figure as the tally from Syria’s 11-year war, which previously was the source of the world’s biggest refugee crisis.

Talks are underway between Kyiv and Moscow on the possible evacuation of 38 “severely wounded” Ukrainian troops from the Azovstal steelworks in Mariupol, Ukraine’s deputy PM said Thursday afternoon.

The steel mill is the only remaining stronghold of Ukrainian resistance in the ruined port city, and is now surrounded by Russian forces.

“Currently, we are negotiating only about 38 severely wounded fighters, who cannot stand on their own. We are working step by step,” Iryna Vereshchuk wrote in a public post on the Telegram messenger app.

She said that Kyiv hoped to exchange the soldiers for 38 “significant” Russian prisoners of war, before moving on to the next stage of the negotiations. She did not specify what this next stage would concern, but said that there were no negotiations “on the exchange of 500 or 600 people.”

Earlier on Thursday, an official at the Ukrainian President’s Office said that Kyiv hoped to extract “half a thousand” wounded Ukrainian fighters from Azovstal.

Members of the Azov Regiment holed up inside the plant have repeatedly refused to surrender, citing fears of being killed or tortured. On Tuesday, Ukrainian officials said that “more than a thousand” Ukrainian troops, many of them injured, remained at Azovstal.

A Ukrainian commander among the fighters besieged by Russian forces in the Azovstal factory in Mariupol appealed directly to US billionaire Elon Musk on Wednesday for help in saving them.

Taking to Twitter to plea for help from the founder of SpaceX and Tesla, Sergei Volyna, commander of the 36th Marine Brigade in Mariupol, said: “People say you come from another planet to teach people to believe in the impossible”.

Sergei Volyna asked the billionaire SpaceX founder for help getting his troops out of the besieged Azovstal steel plant. 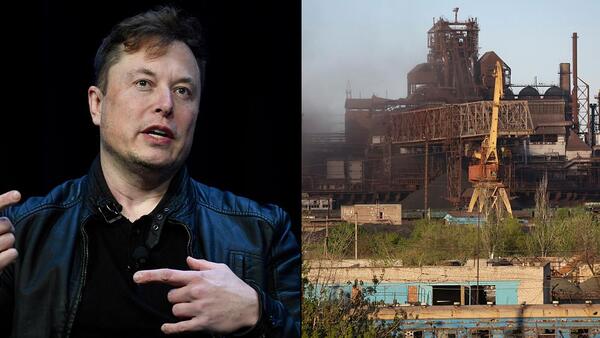 ‘If not you, then who?’: Besieged Ukrainian asks Elon Musk for help

Russia warns of ‘retaliation’ against Finland for NATO decision

Russia has warned that it will have to take unspecified “military-technical” steps in response to Finland’s decision to join NATO.

The Russian Foreign Ministry said Thursday that Finland’s accession to NATO will “inflict serious damage on Russian-Finnish relations, as well as stability and security in Northern Europe.”

It said in a statement that “Russia will be forced to take retaliatory steps of military-technical and other characteristics in order to counter the emerging threats to its national security.”

The statement noted that while it’s up to Finland to decide on ways to ensure its security, “Helsinki must be aware of its responsibility and the consequences of such a move.” The ministry charged that Finland’s move also violated past agreements with Russia.

“History will determine why Finland needed to turn its territory into a bulwark of military face-off with Russia while losing independence in making its own decisions,” it added.

The ministry’s statement follows Kremlin spokesman Dmitry Peskov’s comment earlier Thursday that Finland’s decision wouldn’t help stability and security in Europe. Peskov said that Russia’ response will depend on NATO’s moves to expand its infrastructure closer to the Russian borders.

Thousands of Ukrainian civilians ‘held in prison by pro-Russian separatists’

About 3,000 Mariupol civilians are being detained in prisons controlled by pro-Russian separatists in Ukraine’s industrial east, the country’s human rights chief says.

Lyudmyla Denysova claimed on social media Thursday that Kyiv is aware of at least two prisons set up in the eastern Donetsk region, one in the regional capital of Donetsk and another in Olenivka, a suburb 20 kilometers southwest of the city center.

She claimed that authorities in Kyiv had received reports of people being “tortured, interrogated, threatened with execution and forced to cooperate,” and others disappearing after interrogations.

She also alleged that detainees were being kept in “inhuman conditions,” with inadequate access to bathrooms and no space to lie down.

She claimed that some captives had been released after 36 days, after signing unspecified documents, but did not provide more details. Ukrainian authorities are calling on the UN to intervene.

More than 100,000 civilians remain in the ruined port city of Mariupol, which had a pre-war population of about half a million. Ukrainian authorities have previously claimed that “thousands of Ukrainians” had been forcibly taken to Russia.

Troops from Ukraine’s Azov Regiment continue to hold out at the Azovstal steelworks, the last bulwark of Ukrainian resistance in the city.

Germany gives its “full support” to the will of the Finnish leaders to immediately join NATO, Chancellor Olaf Scholz said Thursday.

“I welcome Finland’s decision to come out in favor of the country’s immediate membership in NATO,” the German leader wrote on Twitter.

Scholz says he told Finnish President Sauli Niinistö in a telephone interview of the “full support of the German government” for the Nordic nation’s desire to join.

The President and Prime Minister of Finland said they were in favor of joining NATO “without delay” on Thursday, a huge step towards a candidacy to be formalized on Sunday.

The Kremlin immediately reacted by saying that joining the Nordic country in the Western military alliance would “certainly” constitute a threat against Russia.

Study: U.S. headed for ‘mass death’ due to opioids mixed…