A man waits in a bus to be processed as he arrives with others at a reception center for displaced people in Zaporizhzhia, Ukraine, Monday, May 2, 2022.

An effort to evacuate people from the Ukrainian city of Mariupol has continued on Monday, with the first few survivors from the city’s vast steel plant emerging to safety.

EU energy ministers are holding crisis talks in Brussels, striving for a united response to Moscow’s demand that European buyers pay for Russian gas in roubles or face their supply being cut off. Diplomats said the EU was edging towards a ban on Russian oil imports by the end of the year.

Israel has strongly criticised Russian Foreign Minister Sergei Lavrov for saying “Hitler also had Jewish origins” as he tried to justify Russia’s stated aims to ‘denazify’ Ukraine, claiming Nazis could still be running the country even if President Zelenskyy is Jewish.

President Zelenskyy said that a group of about 100 people were evacuated from the Azovstal plant during the day on Sunday. Russia’s defence ministry put the number at 80 civilians.

A safe passage operation at the steel plant in Mariupol was due to continue on Monday. The plant is the last Ukrainian stronghold in the besieged southern Ukrainian port city..

More than a quarter of all troops Russia deployed for its war in Ukraine are now “combat ineffective”, says UK’s Ministry of Defence.

The number of civilians in Ukraine who have died as a result of the war has topped 3,000, according to UN figures published Monday.

But it said the real death toll is likely to be “considerably higher.”

This gap is because information is hard to obtain in many areas of the country, especially where conflict is raging, and many reports require confirmation.

The UN report did not say who was responsible for the deaths, but it believes most civilians have been killed by indiscriminate explosive weapons, such as missiles and airstrikes. 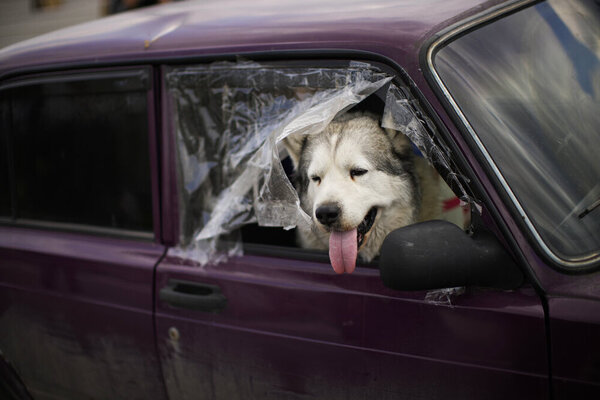 A dog peers from a car with people arriving to a reception center for displaced people in Zaporizhzhia, Ukraine, Monday, May 2, 2022. (AP Photo/Francisco Seco).17:36

The first group of civilians has been evacuated from the Azovstal steel plan in Mariupol, with officials and relief workers in Ukrainian-held territory anxiously awaiting more survivors.

The steel mill is the last stronghold of Ukrainian fighters in the devastated city, and there’s believed to be 1,000 civilians trapped there as well, amid ongoing Russian bombardment.

Video posted online Sunday by Ukrainian forces showed elderly women and mothers with small children climbing over a steep pile of rubble from the sprawling Azovstal steel mill and boarding a bus.

More than 100 civilians from the bombed-out plant were expected to arrive in Zaporizhzhia, about 140 miles (230 kilometers) northwest of Mariupol, on Monday, Ukrainian President Volodymyr Zelenskyy said.

“Today, for the first time in all the days of the war, this vitally needed green corridor has started working,” he said in his latest video message.

However, at least some of the people evacuated from the plant on Sunday were apparently taken to a village controlled by Moscow-backed separatists. The Russian military said that some chose to stay in separatist areas, while dozens left for Ukrainian-held territory. The information could not be independently verified.

In the past, Ukraine has accused Moscow’s troops of taking civilians against their will to Russia. Moscow has said the people wanted to go to Russia.

The steel-plant evacuation, if successful, would represent rare progress in easing the human cost of the almost 10-week war, which has caused particular suffering in Mariupol. Previous attempts to open safe corridors out of the Sea of Azov city and other places have broken down, with Ukrainian officials repeatedly accusing Russian forces of shooting and shelling along agreed-upon evacuation routes.

The latest evacuation efforts are being overseen by the United Nations and the Red Cross.

Poland urged its European Union partners on Monday to unite and impose sweeping sanctions on Russia’s oil and natural gas sectors over the war in Ukraine, and not to cave in to pressure to pay for their gas in Russian rubles.

EU ministers are meeting in Brussels to discuss their response to Russia’s decision last week to cut gas supplies to Bulgaria and Poland. Energy giant Gazprom says the two countries failed to pay their bills in April.

“We will call for immediate sanctions on Russian oil and gas. This is the next, and urgent, and absolute step,” Polish Climate and Environment Minister Anna Moskwa said. “We already have coal. Now it’s time for oil, and (the) second step is for gas. The best option is take them all together.”

The 27 nation EU imports around 40% of the gas it consumes from Russia. But some member countries, notably Hungary and Slovakia, are more heavily dependent on Russian supplies than others, and support for a gradual phasing in of an oil embargo is emerging.

Germany believes it could cope if supplies of Russian oil were cut off by Moscow. Economy Minister Robert Habeck said that Russian oil now accounts for 12% of total imports, down from 35% before the war, and most of it goes to the Schwedt refinery near Berlin.

Denmark, US announce return of diplomats to Kyiv

America hopes to have diplomats back at the embassy in Kyiv “by the end of the month.”

The senior US diplomat in Ukraine Kristina Kvien told a press conference in Lviv on Monday that her priority for returning “is the safety of the staff.”

“If the security agents tell us that we can return to Kyiv, then we will return there” Ms. Kvien said.

The US decided to move its embassy in Ukraine from Kyiv to the city of Lviv in the west of the country on 14 February, ten days before the launch of the Russian invasion, and later evacuated staff from the country completely.

Denmark reopened its embassy in the Ukrainian capital on Monday.

Several other countries, including France, the United States and Britain, have recently announced they are moving their embassies back to Kyiv.

A Finnish nuclear energy company said Monday it has decided to terminate with immediate effect a contract with Russian state nuclear energy corporation Rosatom for the delivery of a nuclear power plant, in part due to the war in Ukraine “which has worsened the risks for the project.”

The company, Fennovoima, also cited “significant delays and inability to deliver the project” for terminating the deal to build the northern Finland Hanhikivi Nuclear Power Plant.

It was proposed to house a Russian-designed pressurized water reactor, with a capacity of 1200 MW and the nuclear power plant was to generate approximately 10% of Finland’s electricity needs, the company said.

In April 2021, the company announced that construction was to begin in 2023 and commercial operation would start in 2029.

In a statement, Fennovoimas’s CEO Joachim Specht said the decision “is estimated to have a significant employee impact in Fennovoima and is expected to impact also the supply chain companies.”

In an interview with an Italian news channel, Russian Foreign Minister Sergey Lavrov claimed that Ukraine could still have Nazi elements even if some figures, including President Volodymry Zelenskyy, were Jewish. “Hitler also had Jewish origins, so it doesn’t mean anything,” he said, according to an Italian translation.

“Lavrov could not help hiding the deeply rooted antisemitism of the Russian elites,” Kuleba said in a tweet Monday. “His heinous remarks are offensive to President Zelenskyy, Ukraine, Israel, and the Jewish people. More broadly, they demonstrate that today’s Russia is full of hatred towards other nations.”

The Ukrainian military says that Russia has redeployed some of its forces from the port of Mariupol to join its offensive in the east.

The General Staff of the Ukrainian armed forces said Monday that several Russian battalions had been sent from Mariupol to the town of Popasna in the eastern Luhansk region.

Popasna has been one of the epicentres of fighting in the east as the Russian military has sought to break through the Ukrainian defences there in a bid to encircle the forces in the east.

The Ukrainian General Staff also said that the Russians were trying to press their attacks from Izyum to the towns of Slovyansk and Barvinkove.

The Russian military is still struggling to uproot the last remaining Ukrainian pocket of resistance at the giant Azovstal steel mill in Mariupol. The UN is set to coordinate an effort Monday to evacuate civilians sheltering at the plant.

COVID-19: More traffic on some UK roads than before the pandemic