Ukraine war live updates: Kyiv vows to fight ‘until the end’ in the east

Ukrainian servicemen run for cover as explosions are heard during a Russian attack in downtown Kharkiv, Ukraine, Sunday, April 17, 2022.

It comes as Ukraine continues to call for tighter Western nations against Moscow and for more weapons to repel Putin’s forces.

For the latest developments, follow our live updates, below.

Ukrainian soldiers in Mariupol were on Sunday resisting Russia’s ultimatum to “surrender or die” as they close in on the last remaining forces still holding out.Ukraine’s President Zelenskyy has accused Russia of deliberately trying to destroy everyone in the besieged port city. Earlier he warned Moscow not to “eliminate” the last Ukrainian troops, or it would mean the end of peace talks.Several casualties have been reported in a new rocket attack on Kharkiv in northeastern Ukraine. Russia’s defence ministry said on Sunday that it had bombed a military factory at Brovary on the outskirts of Kyiv, as Moscow intensifies its attacks on the Ukrainian capital.Ukrainian authorities announced the suspension of humanitarian corridors for the evacuation of civilians from eastern Ukraine on Sunday, due to the lack of an agreement with the Russian army on a ceasefire.The Russian defence ministry released a video on Saturday purporting to show a meeting between the head of the navy and survivors of the cruiser Moskva, which sank in the Black Sea last week.Pope Francis invoked “gestures of peace in these days marked by the horror of war” in an Easter vigil homily Saturday in St. Peter’s Basilica.Bulgaria has banned Russian-flagged ships from entering its Black Sea ports as part of expanded EU sanctions, authorities said on Sunday.Russia has banned UK Prime Minister Boris Johnson and several other leading politicians from entering the country.

Ira Slepchenko, 54, and Valya Naumenko, 47, embrace each other, mourning the death of their respective husbands, during an exhumation of four civilians killed and buried in a mass grave in Mykulychi, Ukraine on Sunday, April 17, 2022.

Ukrainian President Volodymyr Zelenskyy says Russian troops in southern Ukraine have been carrying out torture and kidnappings, and he called on the world Sunday to respond.

“Torture chambers are built there,” Zelenskyy said in an evening address to the nation. “They abduct representatives of local governments and anyone deemed visible to local communities.”

“All of this requires greater speed from Western countries in preparing a new, powerful package of sanctions.” 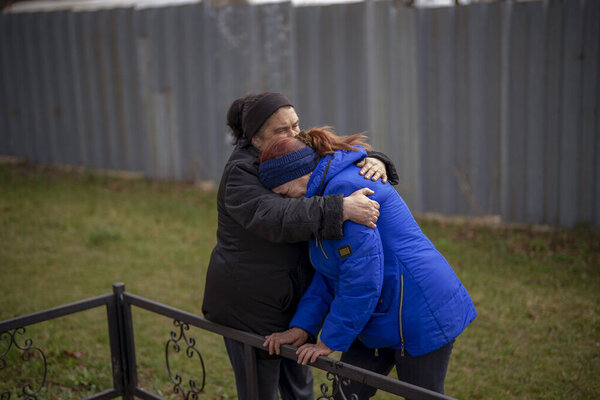 Ira Slepchenko, 54, and Valya Naumenko, 47, embrace each other, mourning the death of their respective husbands, during an exhumation of four civilians killed and buried in a mass grave in Mykulychi, Ukraine on Sunday, April 17, 2022. (AP Photo/Emilio Morenatti)06:21

Ukraine vows to defend Donbas ‘until the end’

Ukrainian President Volodymyr Zelensky has promised that everything would be done to defend the eastern region of Donbas, starting with the strategic port of Mariupol where he called upon surrounded Ukrainian soldiers to fight “until the end.

“Russian soldiers are preparing for an offensive in the east of our country in the near future. They literally want to finish off and destroy the Donbas,” said Zelensky in a video message.

“Just as the Russian military is destroying Mariupol, they want to destroy other cities and other communities in the Donetsk and Luhansk regions”, he continued, adding “we are doing everything to ensure the defence.”

“Sabotage the orders of the occupiers. Do not cooperate with them (…) You must stand your ground,” he said, adding to Western governments that “the need for an embargo on the delivery of oil from Russia is needed every day.”

Throughout the east, the Russian Defense Ministry said Sunday that “high-precision missiles had destroyed fuel and ammunition warehouses” in Barvinkove (Izium region) and Dobropillia (near Donetsk).

“The constant bombardment of the region (of Lugansk) continues”, at the same time deplored its Ukrainian governor, Serguiï Gaïdaï. The locality of “Zolote was hard hit today. They deliberately targeted a five-storey building (…) Two people were killed and five injured”.

Ignoring the ultimatum from Russia, which had asked the last Ukrainian soldiers present in Mariupol to lay down their arms on Sunday, Ukrainian Prime Minister Denys Chmygal assured that the resistance would continue.

“No, the city has not fallen. Our soldiers are still there. They will fight until the end. As I speak to you, they are still in Mariupol,” he told the TV channel. American television ABC.

Moscow had asked the last Ukrainian fighters, entrenched in the Azovstal metallurgical complex, to ceasefire in the morning and to evacuate the premises at midday.

“All those who have given up their arms will be guaranteed to have their lives saved,” the Russian Defense Ministry promised on Telegram. “It’s their only chance.”

Sleaze row: UK is ‘not remotely a corrupt country,’ says…