Serhii Volosovets, a commander in the Ukrainian Territorial Defense Forces, fires a pistol during a training camp for volunteers in Brovary, 22 March

War in Ukraine enters its 26th day after the invasion was launched by Moscow on 24 February.

Christine Lagarde gets European Parliament approval as next…

The Ukrainian army said it forced Russian troops out of Makariv, a strategically important Kyiv suburb, preventing Moscow forces from encircling the capital from the northwest.

President Volodymyr Zelenskyy said on Monday night he is ready to consider committing Ukraine not to join NATO in exchange for a ceasefire and withdrawal of Russian armed forces from the country.

Russian air forces increased their activity, flying over 300 sorties in 24 hours by early Tuesday. However, they are not believed to have established air dominance, Western intelligence sources claim.

Zelenskyy is set to address the Italian parliament at 11 am on Tuesday. Watch live on this page.

The United Nations says 10 million people in Ukraine have now fled their homes since the Russian invasion began at the end of February.

EU Home Affairs Commissioner Ylva Johansson is warning of a “huge risk” that Ukrainian children and women fleeing the war may fall victim to human trafficking.

The UN refugee agency says more than 3.5 million people have fled Ukraine since Russia’s invasion, passing another milestone in an exodus that has led to Europe’s worst refugee crisis since World War II.

UNHCR reported Tuesday that 3.56 million people have left Ukraine, with Poland taking in the lion’s share — more than 2.1 million — followed by Romania with more than 540,000 and Moldova with more than 367,000.

Shortly after the invasion on 24 February, UNHCR predicted that some 4 million refugees might leave Ukraine, though it has been re-assessing that prediction. The outflows have been slowing in recent days after peaking at more than 200,000 each on two straight days in early March.

The International Organization for Migration estimates that nearly 6.5 million people are internally displaced within Ukraine, suggesting that some if not most of them might to flee abroad if the war continues.

The World Health Organization, meanwhile, says it has confirmed 62 attacks on health care assets in Ukraine since the conflict began and through last Friday. The attacks caused 15 deaths and 37 injuries. The assets include hospitals and medical facilities, transport of medical supplies, warehouses, and health care workers. 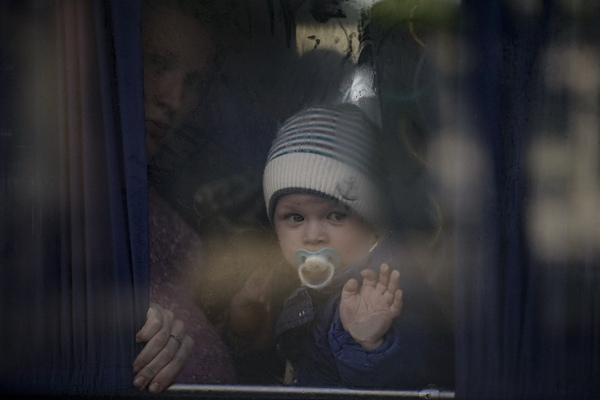 A refugee woman holds a baby while waiting on a bus for Ukrainian police to check papers and belongings in Brovary, Ukraine, Sunday, March 20, 202211:35

‘Italy wants Ukraine in the EU’

“We want a roadmap to get Ukraine closer to Europe,” said Italy PM Mario Draghi, responding to an address by Ukraine president Volodymyr Zelenskyy.

“We will need huge institutional reforms.

“To President Zelenskyy, I want to say Italy is close to Ukraine in this process, Italy wants Ukraine in the EU.”

‘Ukraine has the right to be safe’

When horror and violence seem to have overwhelmed everything, this is the time that we must defend human rights and democratic values,” continued Italy’s PM Draghi.

“The people who are fleeing the war must be welcomed.

“Faced against the massacres and genocide, we must support the resistance.

“Faced against the growing isolation of President [Vladimir] Putin, we need to show the international community is unified

“Ukraine had the right to be safe.”

‘Italy on the frontline of support for Ukraine’

“Today Ukraine is not only defending itself but is defending our peace, our freedom, our security, defending the multilateral order which we’ve constructed with so much difficulty after World War II,” said Italy’s prime minister Mario Draghi.

“Solidarity of Italians to Ukrainians has been huge.

“Italians have opened wide their doors to Ukrainian refugees with a sense their pride of our country.

“We will keep doing this thanks to the incessant work and professionalism of our regions, our civil protections and our volunteers.

“In front of these uncivilised manners, Italy doesn’t want to turn its head. The government and parliament of Italy are on the frontline of support for Ukraine, it will offer financial help, and has answered requests for support and assistance against the Russian invasion.”

“We want to thank President Zelenskyy for his extraordinary testimony and statement to this parliament,” said Draghi.

“Since the beginning of the war, Italy has admired the courage and determination, the sense of motherland of Zelenskyy and Ukraine

“The arrogance of the Russian government has clashed with the dignity of your people.

“This is stopping Russia’s expansionism and is inflicting a high cost to the invaders.”

‘Don’t be a resort for murderers’

“Italian people, you know Ukrainians well,” Ukraine’s president told Italy’s parliament. “Ukrainians are as European as you are. You know who brought the war.

“Bock their assets. Support more sanctions on Russia, more embargo on trade, including oil… they must feel a price for their invasion.

“There should be no exceptions for sanctions.”

‘Kyiv on the edge of survival’

More from the address by Ukraine’s president in Italy’s parliament. You can watch it live here.

“Bombs are falling every day, happening in Kyiv and towns around Kyiv. Russian troops around Kyiv are killing and torturing, torturing and kidnapping children, stealing and robbing everything.

“Ladies and gentleman, it’s time to do everything to secure peace. Their target is ultimately Europe, control over your politics, this is their target, not just Ukraine.

“Ukraine for Russia is the gateway to Europe, they want to get through the gate.”

He begins by saying 117 children have now been killed in the conflict.

“This is the price of the procrastination of pressure on Russia to stop this war,” Zelenskyy tells Italy’s parliament.

The teenage boys from Greenland unlocking their futures as entrepreneurs

People power and creativity drive facelift of Angola’s port of…

Classic Mediterranean dishes taken to new heights at BBR by…