Russian Navy Captain Alexander Shvarts stands in front of an artillery system on the Russian missile cruiser Moskva as it patrols off the coast of Syria in December 2015.

It is day 50 of the war in Ukraine, as Russian forces are expected to begin a new big offensive in the east of the country after their retreat from the Kyiv region and other parts of the country revealed growing evidence of human rights atrocities.

Follow Thursday’s events as they unfold in our blog below, or watch TV coverage in the video player above.

The Kremlin admitted its Black Sea Fleet flagship, Moskva, was “heavily damaged” after Odesa region’s governor said the ship was hit by Ukrainian rockets. Moscow has denied claims the ship was sunk.

Joe Biden accused Vladimir Putin of “genocide”, stating that the Russian leader is trying to “wipe out” Ukraine.

Vladimir Putin vows Russia’s goals in Ukraine will be achieved as they press on with military action. He said the negotiations were now in a deadlock.

New mass graves were unearthed in Bucha on Wednesday, as Ukrainian authorities state that at least 720 civilians were killed in this and other Kyiv suburbs.

Russia’s former president Dmitry Medvedev said on Thursday that if Finland or Sweden joined NATO, Russia would strengthen its military assets, including nuclear, in the region.

It comes after Finland yesterday said a decision on whether to apply for NATO membership would be made in a matter of “weeks not months”, while Sweden is debating the prospect.

Medvedev, deputy chairman of Russia’s Security Council, said in the event of membership, “the borders of the Alliance with Russia would more than double. And these borders, they will have to be defended”.

“In this case, there can be no question of a non-nuclear Baltic”, he added, also referring to the deployments of infantry and anti-aircraft systems in the northwest of Russia and ships in the Gulf of Finland.

Referring to Finns and Swedes, he said “no one of sane mind (…) can wish for an increase in tensions on his border and to have Iskander (missiles) next to his house, (missiles) hypersonic and ships with nuclear weapons”.

Moskva ‘has not sunk’

Moskva, the flagship of Russia’s Black Sea fleet, has not sunk and explosions on board have stopped, Russia’s defence ministry has said.

Earlier Moscow admitted the ship had been “severely damaged”.

Ukraine claims it hit Moskva — made infamous during the Snake Island incident earlier in the war — with two missiles causing it “serious damage”.

Moscow concedes the ship was damaged without clarifying whether it was hit by Ukrainian missiles. Russia’s defence ministry said “due to a fire, ammunition exploded on board” and that its crew were safely evacuated from the vessel. It added a probe would try to establish the cause of the fire.

The Good Boss wins six including Best Picture at this… 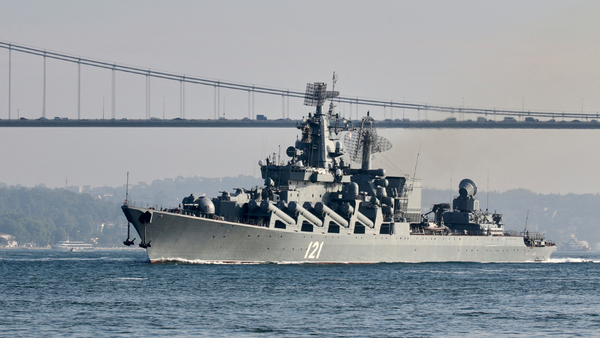 German authorities say they have seized a superyacht in Hamburg after determining that it belongs to the sister of Russian oligarch Alisher Usmanov.

The Federal Criminal Police Office said Wednesday that, after “extensive investigations” and despite “offshore concealment”, it had been able to determine that the owner is Gulbakhor Ismailova, Usmanov’s sister.

Superyacht Dilbar is flagged in the Cayman Islands and registered to a holding company in Malta, two banking havens where the global ultra-rich often park their wealth. It was launched in 2016 at a reported cost of more than $648 million.

The German police office said German authorities worked in Brussels to ensure that European Union sanctions applied to the owner. It says the yacht can no longer be sold, rented, or loaded.

The United States and EU last month announced economic sanctions against Usmanov, a metals magnate, over his ties to Russian President Vladimir Putin and in retaliation for the invasion of Ukraine.

The presidents of four countries on Russia’s doorstep visited Ukraine on Wednesday and underscored their support for the country, demanding accountability for what they called war crimes carried out by Russian forces.

The visit by the presidents of Poland, Lithuania, Latvia and Estonia was a strong show of solidarity from the countries on NATO’s eastern flank, three of them like Ukraine once part of the Soviet Union.

The leaders travelled by train to Kyiv to meet with their counterpart Volodymyr Zelenskyy and visited Borodianka, one of the nearby towns where evidence of atrocities was found after Russian troops withdrew to focus on the country’s east.

Read more on their visit here.

‘Humanitarian corridors to resume in Mariupol’

It’s hoped more civilians will be able to be evacuated from the besieged city of Mariupol after Kyiv announced the reopening of so-called humanitarian corridors.

Iryna Verechtchuk, Ukraine’s deputy prime minister, said on Thursday that Mariupol was one of nine places where corridors will resume.

The other places include Berdyansk, Tokmak and Energodar.

In his late-night address to the nation, Ukrainian President Volodymyr Zelenskyy expressed his gratitude for the visit by the presidents of Poland, Estonia, Lithuania and Latvia.

Zelenskyy also said he’s “sincerely thankful” to the US for the new round of $800 million (€732.8m) in military assistance.

In his telephone conversation with US President Joe Biden, Zelenskyy said they discussed the new weapons shipment, even tougher sanctions against Russia and efforts to bring to justice those Russian soldiers who committed war crimes in Ukraine.

Rare multisystem inflammatory syndrome appears in some teenagers after…

France faces raging wildfires and second heatwave of the…