Ukrainian servicemen carry containers backdropped by a blaze at a warehouse after a bombing on the outskirts of Kyiv, 17 March 2022

Monday marks the 25th day of war in Ukraine after the invasion was launched by Moscow on 24 February.

Unai Emery: Arsenal become the latest in Europe to sack…

Ukrainian deputy prime minister and defence minister both refused Moscow’s ultimatum for the surrender of the southern port city of Mariupol, asking for the humanitarian corridor to be established as soon as possible — an option the Kremlin refuses.Earlier on Sunday President Volodymyr Zelenskyy accused Russia of committing war crimes in Mariupol, saying in a video address that the siege of the city will go down in history for “terror that will be remembered for centuries to come”.Only four out of seven agreed humanitarian corridors were functioning on Sunday, with some 7,000 civilians evacuated, Ukrainian authorities said.At least eight people killed after the shelling of a shopping centre on the outskirts of Kyiv.The UN said on Sunday that 10 million people in Ukraine have now fled their homes since the Russian invasion.

Kremlin spokesman Dmitry Peskov says more progress must be made in talks with Ukraine before Russian President Vladimir Putin can meet his Ukrainian counterpart Volodymyr Zelenskyy.

He adds that “so far significant movement has not been achieved” in the talks and that “there are not any agreements which they could commit to” at a joint meeting.

Ukraine and Russia’s delegations have held several rounds of talks both in-person and more recently via video link. Zelenskyy has said he would be prepared to meet Putin directly to seek agreements on key issues. 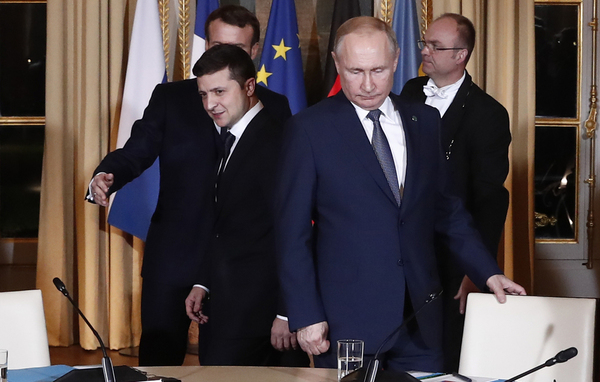 Here’s Euronews’ international correspondent Anelise Borges on the shelling of a shopping centre in Kyiv.

UK officials said that “despite the continued lack of progress, Kyiv remains Russia’s primary military objective and they are likely to prioritise attempting to encircle the city over the coming weeks.”

In an update Monday on social media, the ministry said Russian forces advancing on the city from the northeast have stalled. Troops advancing from the direction of Hostomel to the northwest have been pushed back by fierce Ukrainian resistance.

It said the bulk of Russian forces were more than 25 kilometres from the city centre.

Emergency officials have contained an ammonia leak at a chemical plant that contaminated a wide area in the eastern Ukrainian city of Sumy, officials said Monday.

Sumy regional governor Dmytro Zhyvytskyy did not say what caused the leak.

Earlier, he said the nearby village of Novoselytsya, about 1.5 kilometres southeast of Sumy, was under threat.

The Sumykhimprom plant is on the eastern outskirts of the city, which has a population of about 263,000 and has been regularly shelled by Russian troops in recent weeks.

At least four people were killed, and a large shopping centre in the densely populated Podil district was devastated in shelling overnight on Monday.

Emergency services reported at least four people were killed by the overnight shelling near the city centre late Sunday. The force of the explosion shattered every window in the high-rise next door and twisted their metal frames.

Mykhailo Podolyak, an adviser to Ukraine’s President Volodymyr Zelenskyy, says that six Russian generals and dozens of other senior officers have been killed since the start of the Russian invasion.

Podolyak tweeted on Sunday that “the high mortality rate among Russia’s senior military officers” reflects a “total lack of readiness,” adding that the Russian military relies on its large number of troops and cruise missiles.

The Russian military offered the Ukrainian troops defending the strategic port of Mariupol to lay down arms and exit the city via humanitarian corridors, but that proposal was quickly rejected by the Ukrainian authorities.

Ukraine’s Deputy Prime Minister Iryna Vereshchuk said that Kyiv already had told Russia that “there can be no talk about surrender and laying down weapons.” She rejected the Russian statement as “manipulation”.

The authorities demanded that the humanitarian corridor be established as soon as possible instead.

Russian Colonel-General Mikhail Mizintsev stated on Sunday that Russia will wait until 5 am on Monday for a written response from Kyiv to the Russian proposal for the Ukrainian troops to leave Mariupol but did not say what action Russia will take if its “humanitarian offer” is rejected.

Euronews Debates | The South Africa perspective: Can the EU…