A Ukrainian national flag on a wire on the ground in an area controlled by Russian-backed separatist forces in Mariupol, Ukraine, Monday, April 18, 2022

Russian President Vladimir Putin on Thursday told Russian forces not to storm Ukraine’s last stronghold in the port city of Mariupol as the city’s Ukrainian defenders said they may only have a few days or hours left.

It comes after Ukrainian officials called for a “special round of negotiations” in Mariupol without conditions as Russia’s offensive intensifies in the east.

Euronews Debates: Can the EU & Africa reboot their…

Estonia and Latvia recognised the Russian war in Ukraine as “genocide”.

US President Joe Biden has the US will provide $800 in financial assistance to Ukraine.

The money will be used to help the Ukrainian government fund salaries, pensions and other programmes.

It comes on top of $500 million in economic aid that President Joe Biden unveiled in March.

The International Monetary Fund and World Bank are currently holding a series of spring meetings over how to manage the economic fallout of the Russian invasion, both on Ukraine and the wider world.

The Ukrainian president said he has not seen or heard about any draft document that Moscow says it has passed on indicating its requirements to end the war. #EuropeNews 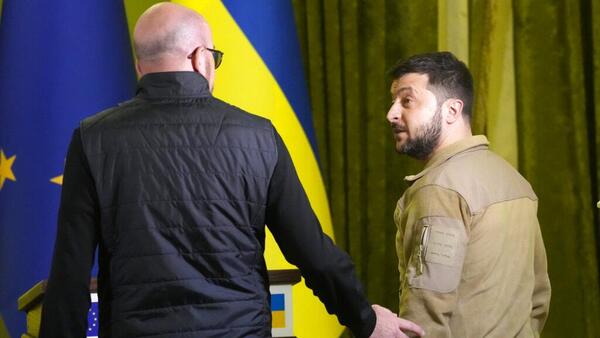 The so-called “Butcher of Bucha” – Lt Colonel Azatbek Omurbekov – has been targeted in a new wave of sanctions by the UK government.

Omurbekov, who now faces a travel ban and asset freezes, led a unit of Russian soliders in the Ukrainian city of Bucha, where hundreds of bodies have been discovered.

Many of the bodies were found to have been shot with their hands and feet bound, indicating a possible war crime, although this is not confirmed.

Russia disputes these allegations, maintaining that its forces have not killed civilians.

Posts casting doubt on evidence of alleged war crimes in Bucha have been shared 208,000 times on Facebook in a week, analysis by the Institute for Strategic Dialogue has found.

“The depravity of Russia’s assault on the people of Ukraine is plain for all to see,” said UK foreign secretary Liz Truss. “Today’s new wave of sanctions hits the generals and defence companies that have blood on their hands.”

Supporters of Russia’s invasion of Ukraine have also been hit with sanctions, including Oleg Belozyorov, the CEO and chairman of logistics company Russian Railways, and several other Russian commanders. 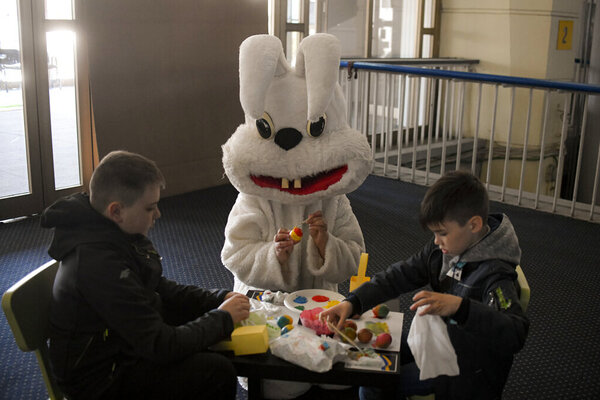 Ukrainian children who fled the war paint Easter eggs next to an entertainer dressed in a rabbit costume during an event for Ukrainian refugees in Bucharest, Romania, Thursday, April 21, 2022.15:43

Spanish PM talks of ‘horror’ on the streets of Ukraine

Spain’s Prime Minister says he saw the “horror and atrocities of Putin’s war on the streets” of Ukraine.

Writing on Twitter, Prime Minister Pedro Sánchez said “we will not leave the Ukrainian people alone,” after he visited Borodyanka, a town in northern Ukraine.

The tweet was accompanied by images of Sánchez and his Danish counterpart Mette Frederiksen walking through the town, which has been devastated by the Russian invasion.

Sánchez and Frederiksen are to hold a news conference with Ukrainian President Volodymyr Zelenskyy later Thursday.

Latvia’s parliament, the Saeima, unanimously adopted a statement on the war in Ukraine, recognising it as “genocide”.

“The Saeima acknowledges that the Russian Federation is currently committing genocide against the people of Ukraine,” the parliament said in a statement.

Rihards Kols, the parliament’s foreign affairs committee chair, emphasised that the priority should now be preventing “further crimes against humanity and helping Ukraine free its land from occupants.”

“The only way to achieve this is to immediately and radically increase the supply of weapons to Ukraine and to stop the EU imports of fossil energy resources from Russia at once,” he said.

Estonia’s ambassador to Ukraine Mariana Betsa has announced the country’s decision to recognise Russia’s offensive in Ukraine as a “genocide,” in what she claimed was a first.

“Russia must bear full responsibility for its horrible crimes,” she said.

Serbia’s interior minister believes his country should reconsider its goal of European Union membership due to the Ukraine war, saying “Russia is our friend.”

Aleksandar Vulin told Serbia’s parliament they should question joining the bloc because of alleged western pressure to join international sanctions against Russia.

“We are an old, ancient, historical nation that chooses its friends,” he said, responding to a draft European Parliament resolution calling on Serbia to show its willingness to join the EU by sanctioning Russia.

“Russia is our friend,” Vulin added.

The draft “clearly indicates that the EU does not want Serbia in its composition” and it is “high time that Serbia also reconsiders its decision to remain on the path to EU membership,” he told state broadcaster RTS.

Serbia has refused to join Western sanctions against Moscow, although it voted in favour of three United Nations resolutions condemning Russian aggression against Ukraine.

Combat tanks from Eastern Europe will be sent to Ukraine in “days” to help it counter the Russian offensive, Germany’s Defence Minister has said.

“These are combat tanks, armoured vehicles, or other possibilities (of equipment) that countries can cede” to Ukraine, explained Christine Lambrecht during an interview.

This material will be delivered “in the next few days” as military experts say “the next two weeks will be decisive” in the Russian war in Ukraine, she said.

“Each country decides what it can give, and we guarantee that we will support them to replenish (their stocks) so that the countries of Eastern Europe can ensure the defence of their own territory,” he said.

Playing the number 9 role: How important is it in modern…

Today at the Olympics: Poland’s Dawid Tomala powers to…