People look at a Russian military vehicle destroyed by the Ukrainian troops in a battle against the Russian invaders and taken to the capital as a reminder of war in Ukraine.

In the third month of Russia’s war against Ukraine, fighting continues in the country’s east and south, with Moscow forces struggling to make any progress.

Meanwhile, the Kremlin is threatening neighbouring European countries with retaliation as the likes of Finland and Sweden express their interest in joining NATO — a consequence of Vladimir Putin’s actions against Kyiv.

**Follow Friday’s events as they unfold in our blog below, or watch the latest updates by clicking the video player above.
**

A glowing report has paved the way for Sweden’s NATO membership, despite warnings by Russia that there will be “consequences” if it and Finland sign up to the alliance.

G7 talks with Ukraine have entered their second day, with France saying the group will support the country until its ‘victory’.

The EU is planning to send a €500 million package of military aid to Ukraine, although it still needs approval.

An official report has paved the way for Sweden to join NATO, after it drew favourable conclusions on the benefits of membership for the country.

The 40-page strategic review, which was presented on Friday, highlighted several advantages of the Nordic country joining the defensive alliance.

However, it stopped short of formally expressing a recommendation.

Neighbouring Finland, which shares a 1,340 kilometres (830 miles) long border with Russia, is expected to formalise its NATO candidacy this week.

“Sweden’s membership in NATO would raise the threshold (of triggering) of military conflicts and would thus have a deterrent effect in Northern Europe,” the report concluded.

Although Moscow has said there will be “consequences” if Sweden and Finland were to enter NATO, the report dismissed an armed attack as very unlikely, although it did recognise the possibility of Russian “provocations” and “realisations.”

The report added that outside of NATO Sweden currently has no “guarantees” of support in the event of Russian aggression.

Coronavirus: ‘Our staff are performing miracles but…

Investigation shines light on betrayal of Anne Frank and…

“Our opinion is that we would not suffer a conventional military attack in reaction to a possible candidacy for NATO,” Swedish Foreign Minister Ann Linde said at a press conference.

But she stopped short of ruling out a military attack on the country, reiterating a government position.

Russia is strongly against a larger and expanded NATO on its borders, which it views as a threat to the country’s security.

The Russian leadership has previously warned that nuclear weapons will be deployed near Scandinavia and the Baltics, should Finland or Sweden decide to sign up.

A formal decision on whether Sweden will join NATO is expected in the coming days.

EU set to give €500 million military aid package to Ukraine

The European Union will provide 500 million euros worth of military assistance to Ukraine in a bid to help it resist the Russian invasion.

Friday’s announcement was made by the EU’s head of diplomacy, Josep Borrell, at a G7 gathering in Germany.

But the head of EU foreign affairs said the funds would only be released if approved by all member states.

Borrell said the cheque would be spent on heavy weaponry, such as armoured vehicles, tanks, heavy artillery and ammunition, although stopped short of promising finance for fighter jets – a key Ukrainian demand.

If ratified, it would mean that the bloc has provided Ukraine with a grand total of 2 billion euros in both lethal and non-lethal support.

Some EU member states are hesitant about providing more military aid to Ukraine, although other figures in the bloc, such as the EU Council president, have thrown their support behind the measure.

The package will likely take weeks to be greenlit by the EU.

Borrell also hoped that the EU would agree on an oil embargo against Russia, which has been discussed in recent weeks.

“We have to get rid of the oil dependency on Russia,” he added.

British military officials said on Friday that Ukrainian forces had repelled a Russian column of armour, which was trying to cross the Siverskyi Donets river in the Donbas, eastern Ukraine, on a pontoon bridge.

“Significant” elements of at least one Russian battalion tactical group, alongside equipment used to deploy the floating bridge, were lost by Russia, the MOD said.

“Conducting river crossings in a contested environment is a highly risky manoeuvre and speaks to the pressure the Russian commanders are under to make progress in their operations in eastern Ukraine,” the MOD said in its daily intelligence update.

It added that Russia has failed to make any major significant advances in eastern Ukraine, despite concentrating forces in the Luhansk and Donbas regions of the country.

After the Russian troops’ retreat from the outskirts of Kyiv, revelations of mass graves with dozens of civilians, some with their hands tied behind their back and most shot to the head in towns like Bucha shocked the world.

Fourteen-year-old Yura Nechyporenko from Bucha feared he would become one of them after his horrifying encounter with Russian forces who were occupying the streets he grew up in.

He also witnessed his father die, unable to do anything to save his life. 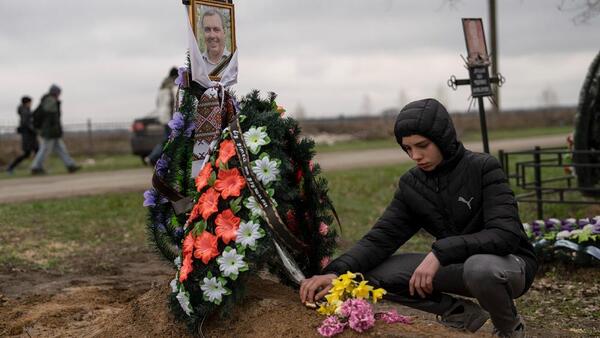 France assured Kyiv on Friday that the G7 group of western nations would support Ukraine “until victory.”

“We will continue to support Ukraine’s fight for its sovereignty over time until Ukraine wins,” said French foreign minister Jean-Yves Le Drian at a meeting of the G7 in Wangels, northern Germany, adding that the G7 would support Kyiv “in the long term.”

“We are not at war with Russia, it is Russia that is at war with Ukraine: there is an aggressor and an attacked and we support the attacked,” he said.

Britain’s Foreign Secretary also called for “more weapons” to be delivered to Ukraine in the face of the Russian invasion.

“It is very important at this time to keep the pressure on Vladimir Putin by supplying more weapons to Ukraine and increasing sanctions,” she said.

“G7 unity has been vital during this crisis to protect freedom and democracy and we will continue to work together to achieve this,” she added.

These remarks come as foreign ministers of the G7 are meeting with their Ukrainian counterparts until Saturday in Germany to find out how to help Ukraine defend against the Russian invasion.

The G7 is a group of powerful advanced economies, including Germany, France, Italy, Canada, the US, Japan and the UK.

Zelenskyy condemns bombardment of schools and hospitals as ‘stupidity, barbarity’

“Of course, the Russian state is in such a condition that any education only gets in its way. But what can be achieved by destroying Ukrainian schools? All Russian commanders who give such orders are simply sick, and incurable.”

He condemned what he suggested were senseless attacks on the refinery in the central Ukrainian industrial hub of Kremenchuk, on the Zaporizhzhia region and the Donbas.

“They are cowards, and they try to hide the truth behind missiles, airstrikes and artillery shelling,” he said in his nightly video address to the nation.

“Therefore our task is to fight until we achieve our goals in this war: to free our land, our people and secure our security.”

Noting that Thursday is International Nurses Day, Zelenskyy thanked Ukraine’s nurses and other medical workers for their part in the fight and urged all Ukrainians to do the same.

He said since the invasion began on 24 February the Russian military had damaged 570 medical facilities, fully destroying 101 hospitals.

“What is that? It’s stupidity. It’s barbarity. It’s the self-destruction of Russia as a state that anyone in the world could see as a cultured nation.”

Ukrainian officials say their forces took out another Russian ship in the Black Sea.

Oleksiy Arestovych, an adviser to the Ukrainian president, said late Thursday the Vsevolod Bobrov logistics ship was struck as it was trying to deliver an anti-aircraft system to Snake Island. He said the ship was badly damaged but was not believed to have sunk.

A spokesman for the Odesa regional military administration said the vessel caught fire after the strike. There was no confirmation from Russia and no reports of casualties.

The British Ministry of Defence said this week that Ukraine has been targeting Russian air defences and supply vessels on Snake Island in an effort to disrupt Moscow’s efforts to expand its control over the Black Sea coastline.

The Ukrainian military last month sank the Moskva cruiser, the flagship of the Black Sea Fleet. In March, the military destroyed the landing ship Saratov.

Ukraine live: Russia throwing everything it has at four cities in eastern Donbas,…

Ukraine live: Russian diplomat resigns, says he’s never been so ashamed of his…

Davos 2022: What to expect from the World Economic Forum’s most consequential…

Ukraine war: Fuel depot in Russia ablaze as Moscow blames Kyiv for attack on its…

FIFA and Qatar criticised over LGBTQ rights and worker…