The Ukraine war is on the eve of its 100th day.

In what was a welcome boost for the war-torn country, Ukraine defeated Scotland in a World Cup qualifying match on Wednesday, bringing it one step closer to taking the stage in Qatar.

Meanwhile, back home, the war continues to rage, with Russia stepping up its attacks in the east of Ukraine and engaging in fiery rhetoric with the West.

Follow our live coverage of the Ukraine war below.

The strategic city of Sievierodonetsk is mostly under Russian control, says UK MoD. Germany, the US, UK and Slovakia will send more weapons to Ukraine. 243 children have been killed so far in the war, says Zelenskyy.The Kremlin has warned of ‘rather unpleasant scenarios’ should Western weapons be used to hit Russia. Denmark has set a date for joining the EU’s common defence policy, after voters overwhelmingly supported it in a referendum.Ukraine’s Mariupol authorities have accused Russia of commiting war crimes – again. Russian missile strikes hit key railway supply lines in Lviv.Ukraine beat Scotland Wednesday night in an emotional World Cup qualifier.

A Kremlin spokesman has warned of “absolutely undesirable and rather unpleasant scenarios” should weapons supplied to Ukraine by the West be used to hit targets in Russia.

Dmitry Peskov made the remarks to reporters during his daily conference on Thursday, adding that “the pumping” of weapons “will bring more suffering to Ukraine, which is merely a tool in the hands of those countries that supply it with weapons.”

The Kremlin’s fiery rhetoric comes as the UK said on Thursday it would send sophisticated medium-range rocket systems to Ukraine.

This came off the back of a pledge by the United States and Germany that they would equip the embattled nation with advanced weapons for shooting down aircraft and knocking out artillery.

“This will significantly change the situation in an unfavourable direction,” Peskov said.

Worth more than €95 million ($101 million), the package will include anti-ship missiles, civil protection and financial support.

The variety of goods on sale at Russian shops has plummeted across nearly every category this spring, according to the research company NielsenIQ.

Nielsen estimates that from March 21 to May 1, the range of household and personal care products decreased by 22.9 per cent compared to the same period last year.

The range of washing powders, personal hygiene products (31.8 per cent) and dishwashing detergents (31.2) decreased the most by 32.7.

Russian consumers are seeing increasingly limited product choices as Western sanctions and the fallout from the war in Ukraine have led to more than 900 foreign businesses exiting the country. 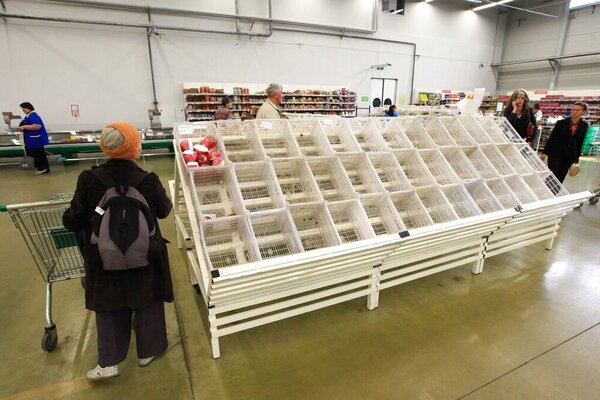 About 20% of Ukrainian territory controlled by Russian forces, Zelenskyy says

Prior to the invasion, Russian forces controlled “more than 43,000 square kilometres,” he added.

Ukrainian foreign minister Dmytro Kuleba said he was “grateful” to the United States for providing $700 million in funding for additional US arms, equipment and supplies for Ukraine.

In an editorial published in the New York Times on Tuesday, Joe Biden confirmed the US will “provide the Ukrainians with more advanced rocket systems and munitions that will enable them to more precisely strike key targets on the battlefield in Ukraine”.

Germany’s vice-chancellor says Russia’s continued income from high fuel prices “hurts” but the Russian economy is collapsing and “time is working against Russia.”

Robert Habeck, who is also Germany’s economy minister and responsible for energy, told parliament Thursday that “the income that (Russian President Vladimir) Putin has obtained in recent months because of high prices hurts, and we can only be ashamed that we haven’t yet managed to reduce this dependence more significantly.”

But he argued that looking at Russia’s gas and oil income doesn’t tell the whole story. Habeck said that “Putin is still getting money, but he can hardly spend it anymore” because of Western sanctions. He pointed to big drops in exports to Russia, including from Germany.

The Russian Defense Ministry claimed Thursday it has stopped the flow of foreign fighters joining the Ukrainian army.

“Since the beginning of May, the influx of foreign mercenaries into Ukraine wanting to take part in hostilities against the Russian army has practically dried up,” said Russian Defense Ministry spokesman Igor Konashenkov.

The number of foreign fighters inside Ukraine has been “almost halved”, going from 6,600 to 3,500, and “a large number” of them “prefer to leave Ukraine as soon as possible,” said Konashenkov, without providing evidence for his claim.

He alleged their number had halved as a result of Russian high-precision strikes, their “low level of training” and “lack of experience.”

These allegations could not be independently verified.

Russia presents these foreign fighters as “mercenaries”, a derogatory term that suggests that they are motivated by the lure of profit.

Ukraine and its Western allies have pointed out that there are mercenaries on the Russian side, with in particular the presence of elements of the Wagner group, whose soldiers of fortune have been deployed from Syria to Libya, via Mali.

Since the beginning of Moscow’s invasion of Ukraine on February 24, thousands of foreign volunteers, mainly Europeans, have travelled to this country to help repel the Russian attack.

This comes after Wednesday’s referendum, in which two-thirds of voters decided to abandon a 30-year-old waiver that kept the Scandinavian country out of the EU’s common security and defence policy.

66.9 per cent voted in favour of signing up, with 33.1 per cent against, after all of the votes were counted.

Denmark’s move, which was praised by foreign ministries across Europe, is the latest example of a European country seeking closer defence links with its allies after Russia’s invasion of Ukraine.

Many men think they’re healthier than they are, skip annual checkups

Live: Kyiv and other cities hit by missile strikes during UN chief’s visit