Russian army Sergeant Vadim Shishimarin, 21, is seen behind a glass during a court hearing in Kyiv, Ukraine, Friday, May 13, 2022.

Read our latest coverage of Russia's war in Ukraine below, or take a look at Euronews TV in the video player, above.

The first Russian soldier being tried for war crimes in Ukraine has pleaded guilty, acknowledging all the charges against him, according to AFP.

Moscow claims that close to a thousand soldiers from Azovstal steelworks have surrendered since Monday. Their fate is now uncertain.

The fall of Mariupol appears to be at hand as Ukraine is moving to abandon the sprawling steel plant where its soldiers have held out under relentless bombardment for the last few months.

The first war crimes trial since Moscow’s invasion of Ukraine, against a Russian soldier accused of killing an unarmed civilian, gets underway in Kyiv today.

Finland and Sweden formally submit their applications to join the NATO military alliance.

Meanwhile, the US has launched a programme to research, document and publicise potential war crimes committed by Russian troops in Ukraine.

Human Rights Watch accuses Russia of summary executions, torture and other abuses during their occupation of areas around Kyiv and Chernihiv early in the conflict.

The first Russian soldier being tried for war crimes in Ukraine has pleaded guilty, acknowledging all the charges against him, according to AFP.

Shishimarin, who is on trial in Kyiv, faces a possible life sentence.

Ukrainian prosecutors said Shishimarin was commanding a unit in a tank division when his convoy came under attack. He and four other soldiers stole a car, and as they were travelling near the village of Shupakhivka in the Sumy region they encountered a 62-year-old man on a bicycle.

“One of the soldiers ordered the accused to kill the civilian so that he would not denounce them,” the prosecutor’s office said.

Shishimarin then fired a Kalashnikov assault rifle from the window of the vehicle and “the man died instantly, a few dozen metres from his home”, prosecutors added in a pre-trial statement. 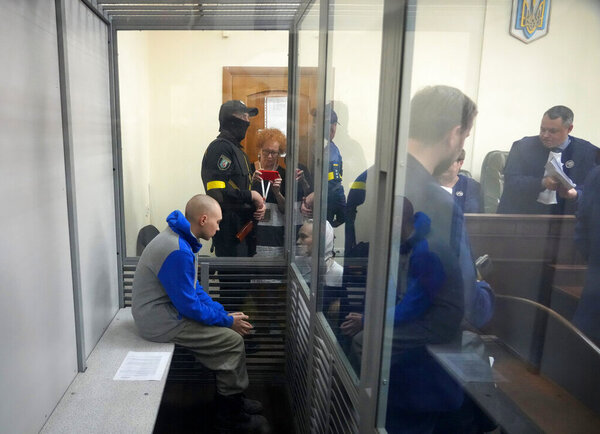 Russian army Sergeant Vadim Shishimarin, 21, is seen behind a glass during a court hearing in Kyiv, Ukraine, Friday, May 13, 2022. (AP Photo/Efrem Lukatsky)13:57

The European Commission proposed on Wednesday a €9 billion loan to Ukraine, to help keep the country going as it struggles to fend off Russian aggression.

“We are proposing to top up the significant short-term relief provided until now, with a new exceptional macro-financial assistance for Ukraine of up to €9 billion in 2022,” Commission President Ursula von der Leyen said.

“But we also need to think about the day after for the wider reconstruction effort. The EU would and should not be the only one contributing to this effort,” she added.

“That is why we propose a reconstruction platform as part of this plan jointly led by Ukraine and the Commission and bringing together EU Member States, other bilateral or international donors, international financial institutions, and other like-minded partners,” she said.

Russia to expel 34 French diplomats in tit for tat

Russia’s foreign ministry said on Wednesday that it was expelling 34 French diplomats in a retaliatory move.

In April, France kicked out 35 Russians with diplomatic status as part of a broader wave of expulsions that ultimately saw more than 300 Russians sent home from European capitals, reports Reuters.

Later that month France’s foreign ministry declared six Russian agents posing as diplomats as “persona non grata” after an investigation by the domestic intelligence services concluded they were working against French national interests.

According to AFP, Russia also announced Wednesday the expulsion of 24 Italian and 27 Spanish diplomats.

Top-ranking Ukrainian commanders have not yet surrendered from the labyrinth of bunkers and tunnels below the Azovstal steel works in Mariupol, the leader of the Russian-backed separatist region of Donetsk said on Wednesday.

As the most devastating siege in Russia’s invasion moves towards a finale, nearly 1,000 Ukrainian fighters who barricaded themselves into the tunnels have so far given themselves up to Russian and pro-Russian forces since Monday.

Russia’s defence ministry said that in the past day 694 Ukrainian fighters – including members of the Azov regiment – had surrendered, including 29 wounded.

It was unclear if the top commanders would leave the plant, or possibly even fight a last mortal battle with the Russian forces they regard as occupiers of their motherland.

“There are no commanders of the highest level (among those who surrendered) – they have not left,” said Denis Pushilin, head of the breakaway Donetsk People’s Republic which was officially recognised by President Vladimir Putin just three days before the invasion of Ukraine.

Turkish President Recep Tayyip Erdogan, who is threatening to block Finland and Sweden’s NATO membership, hoped on Wednesday that his “allies will hear (our) concerns” and “support us.”

“We can’t say yes,” he repeated. “Supporting terrorism and asking for (our) support is a lack of coherence.”

Erdogan accuses the two Nordic countries of hosting members of the PKK, the Kurdistan Workers’ Party that he considers a terrorist organisation.

You can read more on why Ankara is threatening to derail Finland and Sweden’s NATO applications here: 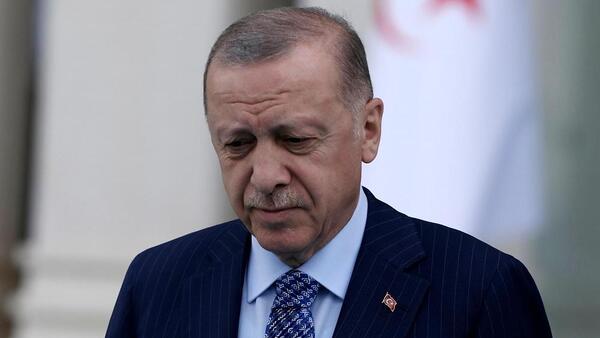 Why does Turkey want to block Finland and Sweden from NATO?

euronewsExperts say the three might end up in negotiations together with the rest of NATO, despite claims by Turkish President Erdogan that sending diplomats will not result in a change of stance in Ankara. #EuropeNews12:16

Kremlin spokesman Dmitry Peskov said on Wednesday that there was no movement in peace talks with Ukraine, and that Kyiv was showing a total unwillingness to continue them.

“Negotiations are not progressing and we note the complete unwillingness of Ukrainian negotiators to continue this process”, Peskov said.

On Tuesday Interfax news agency cited Russian Deputy Foreign Minister Andrey Rudenko as saying that Russia and Ukraine were not holding talks “in any form”, and that Kyiv had “practically withdrawn from the negotiation process”.

US financial support strongest for Ukraine

The United States has mobilised about three times as much support for Ukraine as the European Union, according to figures compiled by a German think tank.

The Kiel Institute for the World Economy said Wednesday that a new aid package passed by the US House of Representatives takes American military, financial and humanitarian support for Ukraine to almost €43 billion between 24th January and 10th May.

The institute found that aid from the EU amounted to just under €16 billion during the same period. However, some countries in the 27-nation bloc have shied away from giving the value of their Ukraine aid, particularly for arms supplies.

Compared to their gross domestic products, Estonia, Latvia and Poland have provided the most support, ahead of the United States, according to the think tank’s calculations.

Germany’s three governing parties plan to strip former Chancellor Gerhard Schroeder of his office and staff after he maintained and defended his long-standing ties with Russia despite the war in Ukraine.

Schroeder’s own Social Democratic Party said Wednesday that lawmakers on the parliamentary budget committee had agreed to link some of the former German leader’s privileges to actual duties, rather than his status as former chancellor.

They planned to submit a proposal to lawmakers on Thursday.

Schroeder has become increasingly isolated in recent months due to his work for Russian state-controlled energy companies.

The 78-year-old is chairman of the supervisory board of Russian state energy company Rosneft and also has been involved with the Nord Stream and Nord Stream 2 gas pipeline projects.

Earlier this year his office staff quit and Schroeder faced a fresh wave of outrage from former political allies after the New York Times quoted him saying that the massacre of civilians in Bucha “has to be investigated” but he didn’t think the orders would have come from Russian President Vladimir Putin, who is a longtime friend.

Ukraine war: Girl among three killed in bombing of children’s hospital in…

The Fed is expected to cut rates again amid conflicting…