Relatives mourn the death of Oleksandr Mozheiko, 31, territorial defense soldier who was killed by Russian army.

It is day 51 of the war in Ukraine, as Russian forces are expected to begin a new big offensive in the east of the country after their retreat from the Kyiv region and other parts of the country revealed growing evidence of human rights atrocities.

Follow Friday’s events as they unfold in our blog below, or watch TV coverage in the video player above.

A factory in the Kyiv region manufacturing Neptune missiles was hit overnight by a Russian strike, with the Kremlin vowing more missile strikes on Kyiv in response to alleged Ukraine attacks on its territory.

Seven were killed after evacuation buses were fired upon near Kharkiv, said Ukraine’s general prosecutor’s office.

In his nightly address on Thursday, Volodymyr Zelenskyy praised the courage of his compatriots in fighting back for almost eight weeks after Moscow “gave us five days”.

A US official says the Russian cruiser that sunk Thursday was hit by a Ukrainian Neptune missile. The Kremlin has claimed the sinking was due to a fire, not an attack.

Should Finland or Sweden join NATO, Russia has threatened a military build-up in the region.

Russia claims Ukraine has struck its territory with airstrikes. This cannot be independently verified.

The governor of the Kharkiv region says seven people, including a seven-month-old child, have been killed in shelling of a residential area in the city.

34 others were wounded, Oleh Sinehubov said Friday in a Telegram post.

Kharkiv, Ukraine’s second-largest city, has been shelled heavily and suffered numerous rocket attacks since the outbreak of war.

The city’s location 40 kilometres (25 miles) from Russia and proximity to separatist regions in the east of Ukraine means it is a strategic target.

Military units of the breakaway Donetsk People’s Republic in Ukraine have taken over parts of Mariupol, following an assault by Russian marines.

“I came here as a volunteer because I understand the situation,” said Andrey, one of the fighters, to the Associated Press. “If not people like us, then who?”

The separatist said school children back in Russia had been sending him drawings.

“It’s nice, you know. Lifts the spirits. If, god willing, I stay alive, I’ll save these for memories,” said Andrey.

A Russian court has threatened US internet giant Google and Wikipedia with fines for failing to delete what it described as “fake” information about the Ukraine conflict.

Russia’s communications watchdog said on Thursday that Google would face fines over its failure to delete videos it deems illegal from its sharing site, Youtube.

Sunken Russian cruiser was hit by missile, says US

A senior US defence official has said they believe the Russian cruiser that sank Thursday was hit by a Ukrainian anti-ship missile.

Pentagon had previously said they could not confirm what had happened to the ship, with Russia saying there was no attack, but a fire.

The official, who spoke on condition of anonymity, said it was a US intelligence assessment that the Moskva was hit Wednesday by at least one, and probably two, Neptune missiles, creating the large fire aboard the vessel.

The official offered no further details beyond saying the US believes the Russians suffered some number of casualties aboard the ship.

Sisu the polar bear gets root canal surgery to fix…

More than 900 civilian bodies have been discovered in the region surrounding the Ukrainian capital following the withdrawal of Russian forces — most of them fatally shot, police said Friday, an indication that many people were “simply executed.”

The number of dead is double that announced by Ukrainian authorities almost two weeks ago.

Andriy Nebytov, the head of Kyiv’s regional police force, said the bodies were abandoned in the streets or given temporary burials. He cited police data indicating that 95% died from gunshot wounds.

“Consequently, we understand that under the (Russian) occupation, people were simply executed in the streets,” Nebytov said.

More bodies are being found every day, under rubble and in mass graves, he added.

The largest number of victims were found in Bucha, where there were more than 350, he said.

‘I focused on survival’: Mariupol escapee tells her story of one month in besieged city

While the cruelty toward Ukrainian civilians projected through photographs and news segments bewilders the world, the ongoing siege of Mariupol continues to be the most shocking in its levels of destruction and absolute disregard for human life.

The remaining residents of the once-thriving southern port city of 432,000, encircled and constantly shelled by the Russian forces, have been facing starvation, thirst and cold for almost eight weeks.

Alina Beskrovna, a 31-year-old finance expert and Mariupol native, survived the first month of the siege in the city, managing to unexpectedly save herself, her mother, and their three cats in late March.

The time she spent there was all about survival, she told Euronews.

“So my biggest fear, my absolute fear was twofold: one was being raped by Russians. The other was being taken to Russia by force or being forced to live in the so-called Donetsk People’s Republic without the possibility of ever moving,” she recalled. 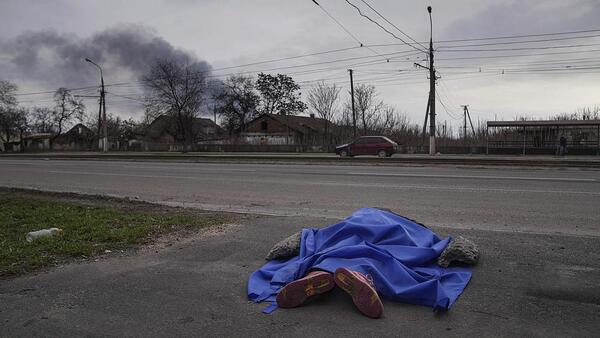 The European Union “deplores the unjustified, baseless decision” of Russia to expel 18 EU diplomats, the bloc said in a statement.

“There are no grounds for Friday’s decision by the Russian authorities beyond being a pure retaliatory step,” a spokesperson said.

The EU’s high representative for foreign affairs, Josep Borrell, tweeted that he “strongly condemned the unjustified decision by Russian authorities.”

“This decision only deepens Russia’s international isolation further,” he added.

Moscow has expelled 18 diplomatic representatives from the European Union in Russia.

The move is a response to a similar measure taken by Brussels over the war in Ukraine.

“In retaliation for the unfriendly actions of the European Union, 18 members of the EU Representation in Russia are declared personae non gratae,” said the Russian diplomatic service in a press release.

They “must leave Russian territory as soon as possible,” it added.

One of Russia’s top independent newspapers has had its website blocked over critical coverage of the war in Ukraine.

The Moscow Times, which also publishes in English, said Friday its Russian-language site was unavailable for some users.

According to the paper, the authorities acted after a story about 11 riot police officers who refused to fight in Ukraine was published.

On Thursday, a journalist who first broke the story was jailed on the charges of spreading false information about the Russian military.

Ukraine war live updates: Zelenskyy says fighting back ‘the most important decision of our lives’

Amy Schumer reveals struggling with a disorder called trichotillomania: What is…

This July 4th, COVID is still killing hundreds of Americans each day

COVID-19 Debate: What lessons can Europe learn from the…