Video footage released by the Russian Defence Ministry on April 20, 2022 shows the launching of the Sarmat intercontinental ballistic missile

The UN Secretary-General has been visiting the sites of atrocities near Kyiv on Thursday, before heading to the capital for talks with Volodymyr Zelenskyy in the afternoon, as UN humanitarian teams plan an evacuation of civilians from Mariupol in coordination with the Red Cross.

Meanwhile, Vladimir Putin warned on Wednesday that any outside interference in the conflict in Ukraine would be met with a “swift and devastating response” — even as the UK foreign secretary urged Western allies to send more heavy weapons to Ukraine, including planes.

Follow our blog for the latest developments as they happen, or watch live video in the player above:

United Nations Secretary General António Guterres, in Ukraine to see President Zelenskyy, called on Moscow to “agree to cooperate” with international war crimes investigations. Visiting towns near Kyiv which have become the symbol of Russian atrocities, he decried war as “nonsense in the 21st century”.The Kremlin has said European security is threatened by Western arms supplies. It came after the UK’s top diplomat called for more heavy weapons to be sent, and for Russia to be pushed out of the “whole of Ukraine”.NATO Secretary-General Jens Stoltenberg said Finland and Sweden would be embraced with open arms should they decide to join the military alliance. The Nordic nations’ intelligence chiefs have warned they must prepare for increased Russian spy operations, cyber-attacks and attempts to influence politicians.German lawmakers have voted in favour of sending heavy weapons to Ukraine in a symbolic decision reflecting the government’s change of course.President Zelenskyy says Russia is using gas as a weapon against Europe, after state-owned Gazprom cut supplies to Poland and Bulgaria. Both countries though could be okay without Russian gas supplies for a few months — at least until winter.The UN says its humanitarian office is mobilising an experienced team to coordinate the complex evacuation of civilians from Mariupol.Vladimir Putin warned against any outside intervention in the conflict in Ukraine, promising it would be met with a “swift and devastating” response.

The UN Security Council has “failed to prevent and end” the war in Ukraine, Secretary-General Antonio Guterres said at a news conference in Kyiv on Thursday.

“The Security Council has failed to do what it can to prevent and end this war,” Guterres said alongside Ukrainian President Volodymyr Zelenskyy, calling it “a source of great disappointment, frustration and anger”.

Ukraine’s prosecutor on Thursday identified 10 Russian soldiers she accused of atrocities in the Kyiv suburb of Bucha, one of the war’s major flashpoints that helped galvanise Western support of Ukraine.

Prosecutor General Iryna Venediktova said on Facebook that the 10 soldiers in Russia’s 64th Separate Motorized Rifle Ground Forces Brigade who occupied Bucha were “involved in the torture of peaceful people.”

She did not specifically say that her office had filed criminal charges and appealed to the public to help develop evidence.

The 10 suspects included officers as high as a general, as well as privates. The Russian government denies it targets civilians.

Russian President Vladimir Putin recently honoured the brigade’s work, and Venediktova said he bears responsibility for the soldiers’ actions as their commander-in-chief.

“During the occupation of Bucha, they took unarmed civilians hostage, killed them with hunger and thirst, kept them on their knees with hands tied and eyes taped, mocked and beat them,” Venediktova said.

She added that the Russian soldiers threatened to shoot the hostages and looted houses.

US President Jow Biden has rejected the idea that NATO is waging a proxy war against Russia, as the country’s FM has claimed.

He said at the White House on Thursday that the idea of a larger proxy war was concerning but “not true,” while promising an additional $33 billion in military aid to Ukraine.

“Instead of saying that the Ukrainians, equipped with some capability to resist Russian forces, are doing this, they’ve got to tell their people that the United States and all of NATO is engaged,” Biden said.

Russia’s foreign minister has accused Nato of fighting a proxy war by supplying military aid to Ukraine, as defence ministers gathered in Germany on Tuesday for US-hosted talks on arming Ukraine.

“Nato, in essence, is engaged in a war with Russia through a proxy and is arming that proxy,” said Sergei Lavrov.

The UK government has announced that a British national has been killed in Ukraine, while another is missing.

The Foreign Office said Thursday it was supporting the family of a UK citizen killed in Ukraine, saying it was “urgently seeking further information” on another whose whereabouts are currently unknown.

No further details were provided by the government.

The Britons were believed to have been fighting with Ukrainians against Russian forces, reported Sky News.

British volunteers – alongside those from around the world – have travelled to fight in Ukraine, despite being warned not to do so by their governments.

Spain tries to cushion itself from Ukraine war

Spain’s parliament has approved a €16 million relief package to cushion the impact of soaring energy prices amid the war in Ukraine.

The new bill was only narrowly approved by MPs, with 176 votes in favour and 172 against.

Thirteen lawmakers from the Republican Left of Catalonia — which normally supports the Spanish government — voted against the motion.

US president Joe Biden has said Russia’s nuclear warnings are “irresponsible” and “show a sense of desperation.”

“It shows the sense of desperation that Russia feels in the face of its miserable failure to achieve its original goals,” he added.

Kremlin spokesman Dmitry Peskov has previously said in an interview CNN that Russia would use nuclear weapons if its very existence were threatened.

“We now have more than 8,000 cases,” she said in an interview with German media outlet Deutsche Welle.

German lawmakers have voted in favour of sending heavy weapons to Ukraine, a symbolic decision that reflects the government’s change of course on the issue.

Thursday’s non-binding motion — with 586 lawmakers in favour, 100 against and seven abstentions — received support from governing parties and the main opposition Union bloc of ex-Chancellor Angela Merkel.

Germany had initially refused to send any offensive weapons to Ukraine and later balked at sending heavy equipment such as armoured vehicles.

Under pressure domestically and from allies, Chancellor Olaf Scholz’s government agreed recently to let Ukraine purchase German armaments and support weapons swaps with allies who in turn are sending heavy gear to Ukraine.

Germany has already sent about 2,500 anti-aircraft missiles, 900 bazookas, and millions of rounds of ammunition, hand grenades and mines to Ukraine, the dpa news agency reported.

It now plans to give armored vehicles to Slovenia to replace Soviet-era tanks the country is sending to Ukraine, send mortars directly to Ukraine and let Kyiv purchase mothballed self-propelled armoured anti-aircraft guns from Germany.

German companies have also asked to send 88 Leopard tanks, 100 Marder armoured vehicles and 100 howitzers to Ukraine, permission for which has yet to be granted. (AP)

It comes after the UK’s top diplomat called for Russian forces to be “pushed out” of Ukraine. Foreign Secretary Liz Truss said the West must “double down” on arms supplies to Ukraine and “prepare for the long-haul.”

The Kremlin said European security is threatened by Western arms supplies, and the “tendency to pump weapons” into Ukraine threatens security and provokes instability. 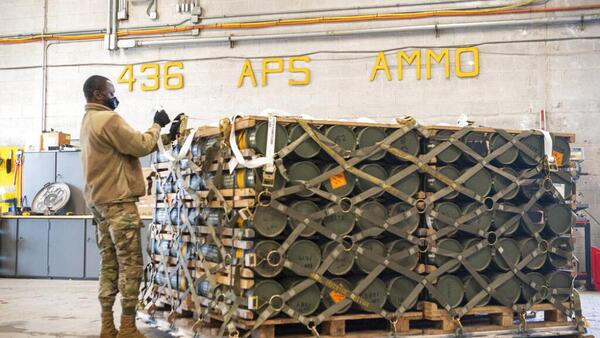 The Kremlin says European security is threatened by Western arms after UK call to push Russia out of ‘whole of Ukraine’. #EuropeNews

Live: Kyiv and other cities hit by missile strikes during UN chief’s visit

New Jersey Woodbridge Township finds no link to cancers among…

Two marble angels stolen from church in 1989 are returned to…

TikTok acts on children’s brains like a ‘candy store’…