Firefighters work to extinguish fire at an apartments building after a Russian attack in Kharkiv, Ukraine, Sunday, April 17, 2022.

It comes as Ukraine continues to call for tighter Western nations against Moscow and for more weapons to repel Putin’s forces.

For the latest developments, follow our live updates, below.

Multiple missiles have struck the western Ukrainian city of Lviv, killing seven and wounding 11 others, says the city’s governor.Surrounded Ukrainian soldiers in Mariupol were still resitingRussian forces on Sunday, with Zelenskyy accusing Russia of trying to ‘destroy the Donbas’.Mariupol has been effectively wiped off the map, says Ukraine’s foreign minister. Evacuations of civilians trapped in combat areas has been postponed for the second day running. Several casualties have been reported in a new rocket attack on Kharkiv in northeastern Ukraine.Ukraine has completed EU membership forms.Russia’s defence ministry said on Sunday that it had bombed a military factory at Brovary on the outskirts of Kyiv, as Moscow intensifies its attacks on the Ukrainian capital.Ukrainian authorities announced the suspension of humanitarian corridors for the evacuation of civilians from eastern Ukraine on Sunday, due to the lack of an agreement with the Russian army on a ceasefire.Bulgaria has banned Russian-flagged ships from entering its Black Sea ports as part of expanded EU sanctions, authorities said on Sunday.Russia imposed travel bans on UK Prime Minister Boris Johnson and several other leading politicians.

Spain to reopen its embassy in Kyiv

Spain will reopen its embassy in Kyiv “in a few days” after closing it following Russia’s invasion of Ukraine, Spanish Prime Minister Pedro Sanchez announced on Monday.

“In a few days we will reopen the Spanish embassy in Kyiv, as further proof of the commitment of the Spanish government, of Spanish society, alongside the Ukrainian people,” Sanchez said in an interview with the Antenna 3 channel.

The Spanish ambassador and the diplomatic staff of the embassy had been evacuated from the Ukrainian capital to Poland the day after the start of the Russian offensive on February 24.

Russia claims ‘irreplaceable losses’ of 23,000 to Ukrainian side

Russia’s Defence Ministry has claimed Ukraine’s army has suffered losses of 23,367 people, since fighting broke out in February.

This figure is contested by Ukraine, with Zelenskyy claiming on Saturday up to 3,000 Ukrainian troops have been killed since Russia invaded.

Euronews cannot independently verify either of these claims.

On Telegram, Russia said it had “reliable data on the true losses of the Ukrainian army, national guard and joined foreign mercenaries.

“As of today, the real documented irreplaceable losses of the Ukrainian side amount to 23,367 people,” they added.

The Russian Defence Ministry also claimed to have data that indicated a “large number of deserted, servicemen, wounded and missing.”

An exact figure did not accompany this claim.

“The criminal Kyiv regime does not recognize its losses, with this publication we prove once again that we are showing the truth,” said the Russian Defense Ministry.

Speaking on CNN on Saturday, Zelenskyy said that about 10,000 of his soldiers had been injured in the war so far, and that up to 20,000 Russian soldiers had died.

Moscow said last month that 1,351 Russian soldiers had been killed and 3,825 wounded.

Again there is no way to independently verify these claims.

While saying the military situation in the east and south of the country was “still very difficult,” Ukraine’s leader said: “The successes of our military on the battlefield are really significant, historically significant.

“But they are still not enough to clean our land of the occupiers,” he added. 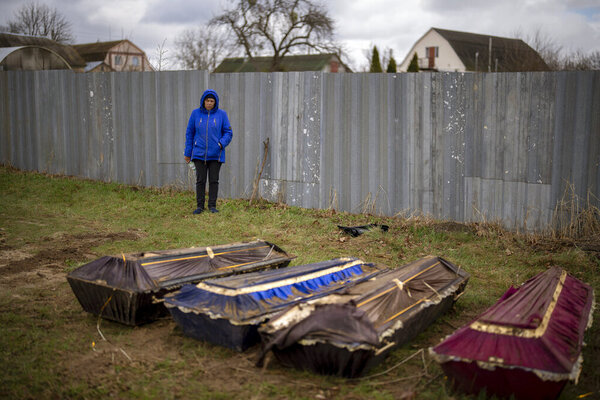 Ira Slepchenko, 54, stands next to coffins, one of them with the body of her husband Sasha Nedolezhko, 43, during an exhumation of a mass grave in Mykulychi, Ukraine on Sunday, April 17, 2022. (AP Photo/Emilio Morenatti)11:20

Ukraine’s Zelenskyy accuses Russia of trying to ‘destroy the Donbas’

“Russian soldiers are preparing for an offensive in the east of our country in the near future. They literally want to finish off and destroy the Donbas,” Zelenskyy said in a video message. 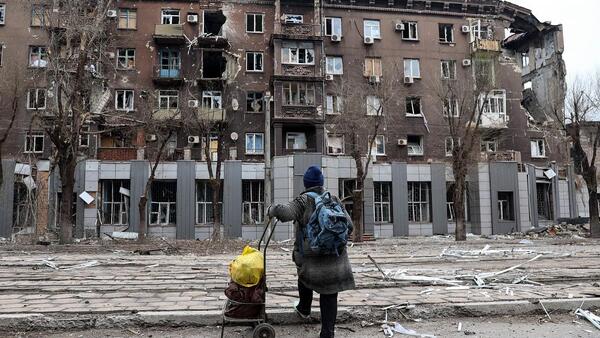 Civilians in combat zones across Ukraine will have to stay put, after Ukrainian authorities postpone evacuations for the second day in a row.

No humanitarian corridors will be in place Monday for civilians to flee intense fighting said the Ukrainian Deputy Prime Minister Iryna Vereshchuk on Telegram, labelling this decision “unfortunate.”

She accused Russia of “blocking” and bombing humanitarian convoys, which meant the evacuations could not take place safely.

Negotiations with the Russian army are “long and complex”, claimed Vereshchuk, especially in the devastated city of Mariupol, which is now largely under Moscow’s control, and other areas where fighting is taking place.

“The Russian occupiers keep blocking and bombing the humanitarian routes. Therefore, for security reasons, it was decided not to open any corridors,” she added.

Russia has repeatedly said it would not threaten the Ukrainian population.

In March, Russia proposed to create safe routes for Ukranian civilians fleeing the bombing which led directly to Russian or Belarussian territory.

This proposal was rejected by Ukraine as “cynical” and “immoral.”

Six known to have died in Lviv strikes

At least six people were killed Monday in a suspected Russian missile attack on the western Ukrainian city of Lviv.

“Five powerful missile strikes in one fell swoop on the civilian infrastructure of the old European city of Lviv,” said Mikhaïlo Podoliak, adviser to President Zelenskyy, on Twitter/

According to Lviv regional governor Maksym Kozitsky, at least six people were killed and eleven more injured, including a child, in the missile blasts, which “seriously damaged” military infrastructure.

Kozitsky said there were four Russian missile strikes, three of which hit military infrastructure facilities and one struck a tire shop.

Emergency teams were putting out fires caused by the strikes he said.

Oleksandr Kamyshin, the chairman of the Ukrainian rail service, said the strikes hit near railway facilities. He said train traffic has resumed with some delays, and he vowed to restore the damaged network.

Lviv has been relatively unscathed by Russian bombs since the beginning of the invasion on February 24. This is in stark contrast to the east of the country where most of the bombing is now concentrated.

The UK defence ministry says the efforts of Ukrainian troops to defend Maripol are tying down Russian forces in the east, as they try to push through with their offensive.

On Sunday, Ukraine’s foreign minister said the strategic port city of Mariupol had been effectively wiped off the map, while surrounded Ukrainian soldiers were stubbornly refusing Russian calls to lay down their arms.

The intelligence update also highlighted the devastation wrought by almost two months of intense fighting between Ukrainian and Russian forces in Mariupol.

“Large areas of infrastructure have been destroyed” and there are “significant” civilian casualties, it said.

The UK accuses Russia of using similar tactics it deployed in Chechnya in the early 2000s, which included the mass bombardment of civilian areas.

Russia has maintained since the start of its invasion that it “would neither strike cities nor threaten the Ukrainian population.” 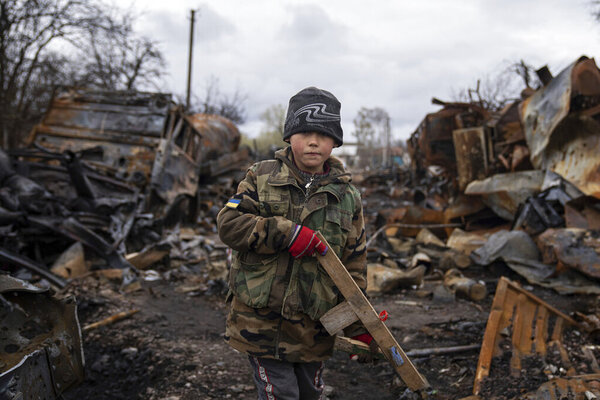 Analysts believe that battle-hardened fighters from Syria are soon to be deployed in Ukraine, as Russia ramps up its offensive in the east.

“Russia is preparing for a greater battle” in Ukraine and Syrian fighters are likely to take part, said Ahmad Hamada, a Syrian army defector who is now a military analyst based in Turkey.

What has fuelled this belief among analysts is Putin’s recent appointment of General Alexander Dvornikov as the new war commander in Ukraine.

General Dvornikov worked with the multiple paramilitary forces in Syria, while he oversaw the deadly siege and brutal bombardment of rebel-held areas, such as Idlib.

Only a small number of Syrian fighters appear to have arrived in Russia so far, and they have mostly been confined to military training ahead of their deployment on the front line.

US officials and activists monitoring Syria are yet to notice a significant number of fighters from the Middle East entering the war in Ukraine.

The addition of Syrian fighters into their ranks would be a welcome boost for Russia’s beleaguered army in Ukraine. Many are experienced soldiers who have spent years battling the Islamic State terror group and Syrian rebels.

There have been some questions about how effective Syria’s fighters would be on a new, unfamiliar battlefield, but they could compensate for Russian losses and help the army deal with more dangerous and bloody combat operations.

Rami Abdurrahman, who heads the UK-based Syrian Observatory for Human Rights, an opposition war monitor, reported that about 40,000 people in Syria have registered to fight — 22,000 with the Russian military and about 18,000 with the Russian private contractor Wagner Group.

In one video posted by pro-government Syrian activists, Russian officers appeared to be advising the paratroopers inside a helicopter as the troops were praised with taps on their heads.

It was not immediately clear if the videos were new.

“The Russians are looking for experienced fighters. They don’t want anyone who was not trained by the Russians,” Abdurrahman said.

Where does each EU country stand on cutting off Russian oil and gas?

Following intensified Russian attacks in the country’s east on Sunday, Ukrainian President Volodymyr Zelenskyy has once again asked European countries to turn off the taps to Russian gas.

But where does each EU country stand on sanctioning Russian energy?

Find out more below. 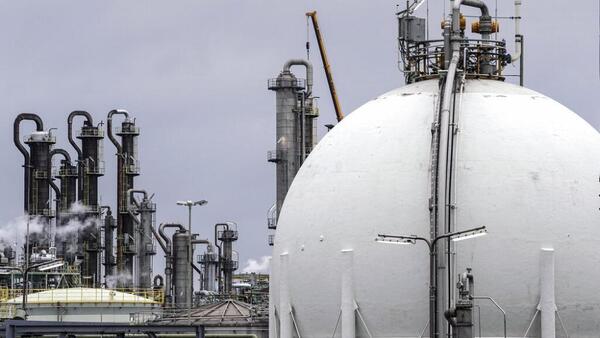 Where does each EU country stand on cutting off Russian oil and gas?

Dozens of works by Russian artists, including Wassily Kandinsky, have been blocked in South Korea due to a suspension of flights imposed after the invasion of Ukraine, organisers have said.

These paintings by some fifty Russian artists, including Kandinsky, Kazimir Malevich, and Alexander Rodchenko, had been exhibited since December at the Sejong Art Museum in Seoul.

The exhibition ended Sunday but the paintings are blocked in the South Korean capital due to the lack of flight options due to western sanctions, an organizer told AFP.

Many Western countries, including the United States and the European Union, have adopted unprecedented sanctions against Moscow following the country’s invasion of Ukraine, which have included travel and airspace bans.

“The works are ready to be sent back but the flights are currently blocked due to the war in Ukraine,” said the event’s organisers.

“Although nothing has been confirmed yet, the Russian side is looking for a way to receive them without going through an air link,” they added.

The works had been loaned by four Russian institutions including the Nizhny Novgorod State Art Museum and the Yekaterinburg Fine Arts Museum.

Wassily Wassilyevich Kandinsky is well known as one of the pioneers of abstract art in the west.

First all-female spacewalk back on six months after…

‘Selling sex for £5 is the only way I can survive…