A serviceman of Donetsk People's Republic militia walks past damaged during a heavy fighting mosque in an area controlled by Russian-backed separatist forces in Mariupol.

Russian attacks have pounded the last Ukrainian stronghold in the besieged port city of Mariupol as the city’s defenders holed up in a steel plant appeared to say they may only have a few days or hours left.

Ukrainian officials called for a “special round of negotiations” in Mariupol without conditions as the West raced to give more weapons to Ukraine as Russia’s offensive intensifies in the east.

Kyiv regional police said two mass graves with nine bodies were discovered the day before in the city of Borodyanka northwest of the Ukrainian capital.

Head of the Kyiv regional police Andriy Nebytov said two women and a teenager were among the “civilians killed by the Russian occupants.”

“I want to stress that these people are civilians. The Russian military deliberately shot civilians that didn’t put up any resistance and didn’t pose any threat,” Nebytov said, adding that some of the victims were apparently tortured.

All of the bodies were transported to the morgues of the Kyiv region for further forensic study.

The US-based Institute for the Study of War said in its latest assessment of the war in Ukraine that Russian forces “made minor advances in the ongoing offensive in eastern Ukraine”.

Their forces made “incremental advances in Mariupol” as they aim to declare victory by 9 May at the latest, the institute added.

The UK said this could impact how they attempt to conduct operations ahead of this date, adding that they are advancing from areas in the Donbas towards Kramatorsk.

Ukrainian President Volodymyr Zelenskyy said he had discussed EU sanctions with European Council President Charles Michel who travelled to the country on Wednesday.

The Ukrainian president called for the EU’s sixth round of sanctions to be “truly painful” stating that they must “motivate Russia to seek peace”.

“This is the historic moment where we can develop maximum speed in joining the EU,” Zelenskyy said.

As part of Michel’s trip to Ukraine, he visited Borodyanka to see alleged atrocities committed by Russian forces. The European Council president said there must be justice for these “war crimes”. 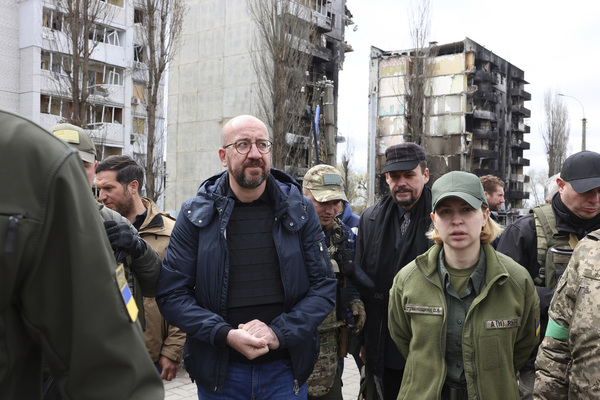 European Council President Charles Michel, centre, as he is given a tour of the region of Borodyanka, Ukraine, Wednesday, April 20, 2022. (Dario Pignatelli/European Council via AP)

US set to send more military aid to Ukraine

US President Joe Biden is set to announce plans to send more military aid to Ukraine on Thursday, an official told AP.

Biden is expected to deliver an address on Thursday morning to detail his plans to send more military assistance.

One of Russia’s stated goals is to expand the territory in the Donbas under the control of Moscow-backed separatists.

Before Russia invaded, Ukraine controlled 60% of the Luhansk region.

Serhiy Haidai said the Russians, who renewed their offensive this week in eastern and southern Ukraine, have strengthened their attacks in the Luhansk region.

Mykhailo Podolyak, an adviser to President Volodymyr Zelenskyy, said that negotiators were ready to hold negotiations “without conditions” inside Mariupol to protect its defenders and civilians.

The city has been subject to constant shelling with most of its buildings and infrastructure destroyed.

There was no immediate response from Russia to Podolyak’s offer.

Bahamas Sandals deaths: what to know about carbon monoxide poisoning,…

Man receives ‘die or do’ surgery, as doctors in Maryland…

Angola uses the Lobito corridor as a vehicle for investment…