A security member of a medical rescue team cleans his weapon in the Donetsk oblast region, eastern Ukraine, Saturday, June 4, 2022.

Russian bombardment pushed Ukrainian troops back from Sievierodonetsk, says the Luhansk regional governor. Zelenskyy described the battle for Sievierodonetsk as the most difficult Ukraine has seen so far.Zelenskyy told US business leaders that ‘the world is supposed to’ weaken Russia. Russian FM said Moscow was willing to open corridors to allow grain exports from Ukraine, but said the country must first de-mine the Black Sea. Ukraine has appealed for long-range western weapons, saying it could ‘clean up’ Sievierodonetsk in days with them. UN head warned that Russia’s invasion of Ukraine is ‘threatening to unleash an unprecedented wave of huger and destitution’.

Vladimir Putin’s annual telephone marathon, which allows ordinary citizens to speak with the Russian president about their daily problems, will not be held for the first time in almost two decades, The Moscow Times reports.

It is the first time that the program, known as Direct Line, has been delayed since 2004.

Kremlin spokesman Dmitry Peskov reassured reporters that the event would take place at a later date, in a statement.

No comment has been made why it was suspended.

Last week the Russian government announced Putin would hold the hours-long phone-in during the Saint-Petersburg International Economic Forum between 15-18 June.

Another regular presidential event, Putin’s address to Russia’s Federal Assembly, was also postponed in April, with no dates yet given for its return.

Ukrainian president Volodymyr Zelenskyy has reiterated his warning that the situation in Ukraine could trigger a global food crisis, in a televised address Thursday morning.

With Ukraine unable to export its wheat, corn, oil and other products due to the war, which he said had a “stabilising role in the global market”, Zelenskyy warned a “terrible food crisis” was looming.

“This means that, unfortunately, there may be a physical shortage of products in dozens of countries around the world. Millions of people may starve if the Russian blockade of the Black Sea continues,” he said.

Blaming Russia for the blockade, Zelenskyy said that “while we are looking for ways to protect freedom, another person is destroying it. Another person continues to blackmail the world with hunger.”

Russia has said it is willing to allow exports of wheat from Ukraine, but said Kyiv must first de-mine the Black Sea.

Tsar Peter the Great, who worked to bring the Russian empire closer to Europe, is being commemorated in Russia Thursday, amid unprecedented hostility between Moscow and the West over the war in Ukraine.

To mark the 350th anniversary of the birth of Peter the Great, who reigned first as Tsar and then as Emperor from 1682 until his death in 1725, Vladimir Putin is due to visit an exhibition dedicated to him in Moscow.

The Russian president “greatly appreciates the role of [Peter the Great] in the history of our country,” according to a Kremlin spokesperson.

Following a trip to Europe which convinced him Russia was lagging behind, Peter the First rapidly modernised the Russian empire, reforming the army, state and the church, creating a navy and initiating a cultural revolution which still has a legacy today.

He also built Saint-Petersburg, the former imperial capital, which he saw as a “window open to Europe”.

Russia’s second-largest city, Saint-Petersburg is also where most of the celebrations will take place on Thursday, with shows and public conferences planned.

Peter the Great is also associated with conquering territory around Russia and expanding the country’s borders, alongside being a strong, convicted monarch. 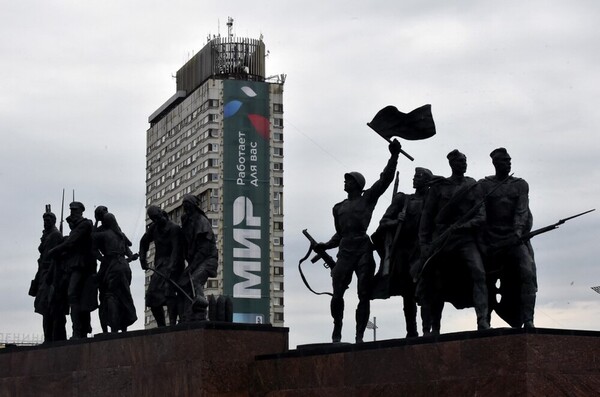 A giant banner of the Russian national Mir card payments system sits on the side of an apartment building behind a World War Two memorial in Saint Petersburg on June 8, 2022. (Olga MALTSEVA / AFP)

‘Did anyone speak like this with Adolf Hitler’ – Polish president

In an interview posted by the German Bild newspaper on Youtube, Andrzej Duda was sharply critical of both German chancellor Olaf Scholz and French president Emmanuel Macron for having phone conversations with Putin.

Comparing the situation to World War II, he said “did anyone speak like this with Adolf Hitler during World War Two? Did anyone say that Adolf Hitler must save face? That we should proceed in such a way that it is not humiliating for Adolf Hitler?

“I have not heard such voices,” he added.

At the weekend, Macron said the west “humiliate Russia” to help facilitate a diplomatic solution to the conflict, which was savaged by Ukraine.

In a joint call with Putin on 28 May, Scholz and Macron urged Putin to release fighters captured at Mariupol’s Azovstal steel plant and to speak directly with Ukrainian President Volodymyr Zelenskyy, according to a statement from Macron’s Elysee Palace.

Zelenskyy rebuked suggestions that Kyiv cede territory to Russia and make concessions to end the war, saying it was reminiscent of appeasement in 1938.

Sievierodonetsk: Ukraine could ‘clean up’ in days with western weapons, says governor

Serhiy Haidai, Ukraine’s governor of Luhansk, has said Thursday his country could ‘clean up Sievierodonetsk in two or three days’ with western long-range weapons.

“If we quickly get western long-range weapons, an artillery duel will begin, the Soviet Union [sic] will lose to the west, and our defenders will be able to clean up Sievierodonetsk in two or three days,” he wrote in a Telegram post.

Haidai added that it was currently impossible to evacuate people out of the strategic eastern city, where fighting is currently raging between Ukrainian and Russian forces.

“Evacuation from Sievierodonetsk is still impossible, as is the transportation of goods. Currently, the hospital has everything necessary to stabilise the wounded,” he said, adding that “the enemy is powerfully pursuing the industrial zone.”

However, Haidai emphasised that Russia was not in control of the Lysychansk-Bakhmut route, which is currently under siege.

Euronews cannot verify the situation on the ground.

Russia’s permanent representative to the UN has insisted Moscow is making progress in Ukraine and the eastern Donetsk and Luhansk regions will be “liberated … very soon”.

Asked if after 100 days of armed conflict the Russian invasion of Ukraine is going according to plan, Vasily Nebenzya said “it seems to me that there is progress. No one promised a result in three days or a week.”

He continued: “Now some experts assure that the Russian military operation has stalled and is going much slower than planned. But there is progress, it continues, and it’s clear as day.”

Vasily Nebenzya was interviewed on the BBC’s HardTalk by presenter Steven Sackur.

In the interview Sackur pressed Nebenzya: “Do you admit that the original plan to take over Kyiv and install a pro-Russian regime there has completely failed?”

“I don’t know anything about such plans,” he replied, noting that no one from the Russian command had ever publically said Moscow intended to capture Kyiv.

“The scale of your losses over the past 100 days is amazing,” Sackur continued. “People living in Russia would be absolutely shocked by these figures if they knew about them.”

Nebenzya did not confirm these losses.

“As I said, they are not officially disclosed, and in the course of any conflict, the parties tend to greatly inflate each other’s losses,” he said. “I cannot tell you the numbers and I cannot comment that Ukraine or the US are talking about it there.”

When asked if the conflict had reached a stalemate, the Russian UN representative said the main goal now is the liberation of Donbas.

“Just give it time … and you will see the Donetsk and Luhansk regions liberated. And, I hope, this will happen very soon.”

Former pro-wrestler John Cena has met with one of his Ukrainian fans – a 19-year-old with Down Syndrome from Mariupol – after the teenager and his family fled Ukraine.

Misha Rohozhyn was promised by his mother, Liana, that the actor was waiting for them in America.

After fleeing Mariupol in March, Misha’s mother told him they were on their way to find Cena to motivate him on their journey to safety.

Misha met with the 45-year-old actor in Huizen, Netherlands, where he and his relatives have sought refuge.

Cena became aware of the 19-year-old after he was chronicled in a piece for The Wall Street Journal in May that explored the impact of war on people with disabilities.

An adviser to Ukrainian President Volodymyr Zelenskyy’s office has said that Russia is now pounding Sievierodonetsk with artillery and airstrikes, having pulled its troops from the city.

Speaking Wednesday, Oleksiy Arestovych said this marks a change in Russian tactics as they battle with Ukraine for control of the strategic eastern city.

The city centre of Sievierodonetsk is largely deserted due to the bombardment, he said.

“They retreated, our troops retreated, so the artillery hits an empty place,” said Arestovych in an online interview.

“They are hitting hard without any particular success,” he added.