Ukrainian President Volodymyr Zelenskyy speaks during an interview with The Associated Press in his office in Kyiv, Ukraine, Saturday, April 9, 2022

Follow the latest updates in our live blog below, or watch TV coverage in the video player above.

In a new interview, President Zelenskyy says Ukrainians still want peace, despite the atrocities of war they have witnessed. Britain’s Ministry of Defence says Russia needs to boost troop numbers with extra recruitment, due to mounting losses in Ukraine war. President Zelenskyy says Russia is targeting all of Europe with its aggression, and that stopping the invasion of Ukraine is essential for the security of all democracies.Shelling by Russian forces of Ukraine’s key port of Mariupol on the Sea of Azov has collapsed several humanitarian corridors which only opened on Saturday. An international fundraising effort called “Stand Up for Ukraine” lead by the EU and Canada has raised €10.1 billion.

More sanctions on the agenda for EU foreign ministers

EU foreign ministers will discuss a 6th sanctions package against Moscow on Monday in Luxembourg, but calls to cut off oil and gas purchases, which in part finance Russia’s war efforts, has divided the 27 member nations.

“We have just imposed heavy sanctions on Russia and we are preparing for a sixth wave,” European Commission President Ursula von der Leyen announced on Friday during her visit to Kyiv.

Studies using MRI brain scans are often too small to be…

Ukrainian President Volodymyr Zelensky continues to ask all his European interlocutors “for the adoption of powerful sanctions”. He is calling for a halt to oil and gas purchases and the supply of heavy weapons.

The EU’s de facto foreign minister Josep Borrell announced his intention to launch the discussion on an oil embargo on Monday, “but a formal proposal is not on the table”, the senior European official admitted on Friday.

“Unanimity is necessary for the adoption of sanctions. We can clearly see the dependencies vis-à-vis Russia in several Member States”, he underlined.

“We are not going to present something that will not pass. Proposals must be made at the appropriate time,” he explained.

Since the start of the war in Ukraine in late February, the Kremlin has made $27.3 billion from EU oil, gas and coal purchases, according to Velina Tchakarova, director of the Austrian Institute for Europe and the security policy (AIES).

The EU has decreed an embargo on the purchases of coal but their amount is much lower than those of gas and oil.

Pope Francis has used his Palm Sunday address to call for “Easter truce” in Ukraine as he lamented “the folly of war.”

“Let an Easter truce begin, but not to reload the weapons and resume the fight. No. A truce to achieve peace through real negotiations,” the Pontiff said, after celebrating Palm Sunday Mass in St. Peter’s Square. 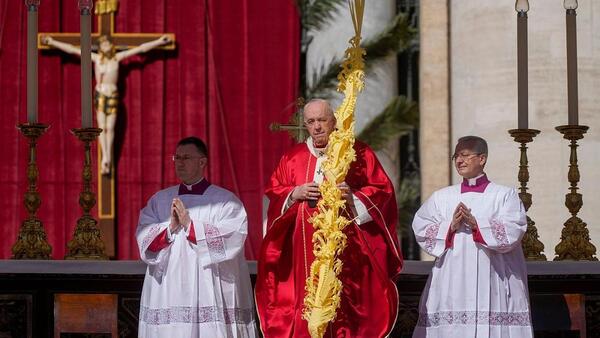 The video was recorded on Saturday on a train journey from Poland to Kyiv, where Johnson met Ukraine’s President Zelenskyy for talks.

The PM also offered his condolences to railway workers killed in Friday’s Russian missile strike on Kramatorsk railway station in eastern Ukraine where more than 50 people were killed, and at least a hundred others were wounded in the attack.

Ukraine ‘ready for battle in the east’

Ukraine has said it is ready to fight a “big battle” in the east of its territory, a priority target for Moscow, where the evacuation of civilians continues in fear of an imminent offensive.

“Ukraine is ready for the big battles. Ukraine must win them, including in the Donbass”, a region in the east of the country, said Ukrainian presidential adviser Mykhaïlo Podoliak, quoted by Ukraine’s Interfax news agency.

“And when that happens, Ukraine will have a stronger position in the negotiations, which will allow it to dictate certain conditions,” he added.

After withdrawing its troops from the Kiev region and northern Ukraine, Russia has made its priority the total conquest of Donbass, part of which has been controlled since 2014 by pro-Russian separatists.

Ukraine’s Ministry of Foreign Affairs says that more than 6,800 civilian buildings have been destroyed by Russia in the war, since the Kremlin launched its invasion on 24 February.

Images from across the east and south of Ukraine show scenes of shocking devastation of infrastructure and buildings, including in many residential areas.

The British Ministry of Defence says that that Russia is changing its recruitment tactics “in response to mounting losses” in Ukraine.

The MoD says that Russia is adding personnel who have been discharged as far back as 2012, and also trying to recruit fighters from the unrecognised Transnistria region of Moldova.

Renewed calls for oil and gas embargo against Russia

In the video, Zelenskyy calling oil and gas sales to the EU the sources of Russia’s “self-confidence and impunity” in its ongoing invasion of Ukraine.

Zelenskyy also thanked the leaders of Britain and Austria for their visits to Kyiv on Saturday and pledges of further support. And he thanked European Commission President Ursula von der Leyen and Canada’s PM Justin Trudeau for a global fundraising event that raised more than 10 billion euros for Ukrainians who have had to flee their homes.

Zelenskyy said democratic countries were united in working to stop the war.

“Because Russian aggression was not intended to be limited to Ukraine alone, to the destruction only of our freedom and our life,” he said. “The entire European project is a target for Russia.”

Americans, behind in the race to build retirement savings,…