Smoke rises from the Metallurgical Combine Azovstal in Mariupol, in territory under the government of the Donetsk People's Republic, eastern Ukraine, Wednesday, May 4, 2022.

The Ukrainian military said early on Thursday that Russian forces had “resumed the offensive” to seize the large Azovstal steel plant in Mariupol, where the city’s last defenders are still resisting.

The reports call into question a pledge by the Russian military to pause its military operation there for three days from Thursday morning to allow civilians to leave.

Follow the latest updates in the live blog below, and watch Euronews TV coverage in the video player above.

Russian forces have “resumed the offensive to take control” of the Azovstal steelworks in Mariupol, Ukraine’s military command says.The Israeli prime minister’s office has said that Russian President Vladimir Putin apologised after foreign affairs minister Sergey Lavrov said that Adolf Hitler had “Jewish blood”.Russia pledged to open a humanitarian corridor on May 5, 6 and 7 to allow civilians to leave the besieged plant in Mariupol.The UN has confirmed to Euronews that a “safe passage operation” is under way in Mariupol “in coordination with the parties to the conflict”.The European Union must not resume “business as usual” with Russia as long as he remains in power, Polish Prime Minister Mateusz Morawiecki told Euronews in an exclusive interview.Air raid sirens sounded in cities across Ukraine on Wednesday night and missile fire followed shortly after in the cities of Cherkasy, Dnipro and Zaporizhzhia. Five people were killed and at least 25 more wounded in shelling of several eastern cities over the past 24 hours, Ukrainian officials said.Ukraine’s foreign minister has accused Russia of wanting to “break us down with their missile terrorism”.

Russian troops made failed attempts to advance in Kharkiv and Donetsk, Ukraine says

The Ukrainian army says Russian troops made “unsuccessful” attempts to advance in the eastern Kharkiv and Donetsk regions.

A Facebook post published Thursday afternoon on the official profile of the Ukrainian General Staff says the Russians also continue to launch missile strikes on transport facilities in order to prevent the movement of humanitarian cargo and military-technical assistance.

The Russian military says its air force has destroyed 45 Ukrainian military facilities in the latest series of strikes.

Konashenkov’s claims could not be independently confirmed.

German Chancellor Olaf Scholz says the nation’s foreign minister will soon travel to Ukraine on an official visit after the two countries resolved a diplomatic spat on Thursday.

The German government had traded barbs with Ukraine’s ambassador in Berlin after Kyiv appeared to snub an offer to visit by Germany’s president.

It was unclear when exactly Foreign Minister Annalena Baerbock will visit Kyiv, and whether she would meet with Ukrainian President Volodymyr Zelenskyy.

Speaking after a meeting with Czech Prime Minister Petr Fiala, Scholz also said Germany is working hard to build new infrastructure for energy imports along its northern coast to help replace gas and oil currently delivered from Russia by pipeline. He said Germany is willing to cooperate closely with those countries that don’t have direct access to seaports.

The UN has confirmed to Euronews that a “safe passage operation” is under way in Mariupol “in coordination with the parties to the conflict”.

“No further details can be shared at this point, as it could jeopardize the safety of the civilians and the convoy,” a UN spokesperson said.

The attorneys general of the US, UK, Australia, Canada and New Zealand met with Ukraine’s prosecutor general virtually on Wednesday, the US justice department said in a statement.

The leaders “discussed their coordinated efforts to hold accountable individuals whose criminal actions are enabling war crimes in Ukraine. They committed to continued close consultation and coordination.”

“America, and the world, are watching very closely what is happening in Ukraine. Every day, we see the heartbreaking images and read the horrific accounts of brutality,” said US Attorney General Merrick Garland.

“But there is no hiding place for war criminals.”

“The Prime Minister accepted President Putin’s apology for Lavrov’s remarks and thanked him for clarifying his attitude regarding the Jewish people and the memory of the Holocaust,” Israeli PM Naftali Bennett’s office said.

Lavrov’s comments caused an uproar in Israel with the country’s foreign affairs minister denouncing them as both “unforgivable and outrageous…as well as a terrible historical error.”

President Vladimir Putin is a “war criminal” who is committing “genocide” in Ukraine and the European Union must not resume “business as usual” with Russia as long as he remains in power, Polish Prime Minister Mateusz Morawiecki told Euronews in an exclusive interview.

“This Russia is totalitarian, it’s nationalistic, it’s imperial, and this Russia wants to re-establish the Russian empire and a post-Soviet Union type of state,” Morawiecki said.

“We cannot see a situation where there’s a retreat to business as usual. Women and children are dying. Russia [commits] genocide in Ukraine and war crimes. Not with this regime,” he added.

“Putin is a war criminal and what he’s responsible for in Ukraine is simply beyond one’s imagination. I think we should create an international tribunal to trace the crimes and make justice again when the war is over.” 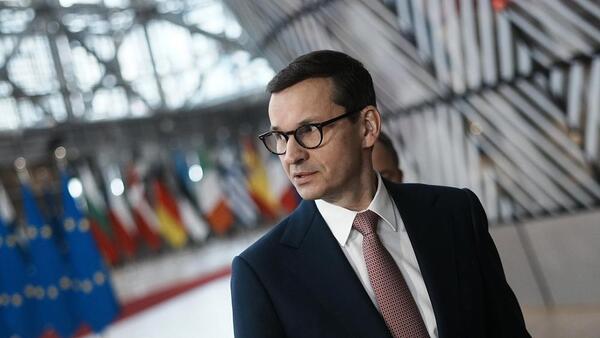 Russia remains “ready” to ensure that civilians holed up with Ukrainian fighters in the Azovstal factory in Mariupol (southeastern Ukraine) are evacuated in a “safe” manner, Russian President Vladimir Putin said on Thursday.

In a telephone call with Israeli Prime Minister Naftali Bennett, Putin spoke about the evacuation of civilians, the Kremlin said.

“The Russian army is always ready to ensure the evacuation of civilians in a safe way,” said Putin, who accused Ukrainian fighters of “holding them back”.

He said Ukrainian authorities should order the last defenders in the plant to lay down their arms.

A $300 million (€285.2 million) superyacht was seized by authorities in Fiji at the request of the United States, the US justice department announced on Thursday.

The US says the 100-metre yacht, the Amadea, is owned by Russian oligarch Suleiman Kerimov who was previously sanctioned for alleged money laundering. Kerimov made a fortune investing in Russian gold producer Polyus, with Forbes magazine putting his net worth at $14.5 billion.

Defence lawyers had claimed the yacht actually belonged to another Russian oligarch.

The former Russian politician was sanctioned by the U.S. Treasury Department in 2018 and has faced further censure from Canada, Europe, Britain and other nations after Russia invaded Ukraine.

For a summary of Wednesday’s events in the war in Ukraine, click here.

US accuses Iranian ‘hackers’ of attempting to…