In this satellite photo from Planet Labs PBC, a Ukrainian naval vessel and a nearby building burn in the besieged city of Mariupol, Ukraine, Wednesday, April 6, 2022

The war is now in its seventh week, with Russian forces now concentrating their offensive on eastern Ukraine, after retreating from the capital Kyiv.

Follow Monday’s events as they unfold in our blog below, or watch television coverage in the video player, above.

Austrian Chancellor Karl Nehammer said his discussion with Putin was ‘difficult’ on Monday after he became the first EU leader to visit Moscow since the start of the war.

In a video address, Zelenskyy says Ukrainians still want peace, despite the atrocities of war they have witnessed. Ukraine’s economy will shrink by 45.1% this year because of Russia’s invasion, the World Bank said.

The US Pentagon said Russia is gearing up for an offensive in the eastern Donbas region, moving troops and material toward that area.

Britain’s Ministry of Defence says Russia needs to boost troop numbers with extra recruitment, due to mounting losses in the war.

Russia has appointed a new Ukraine war commander, General Alexander Dvornikov, a veteran of the Russian campaign in Syria.

Vereshchuk, deputy PM of Ukraine, says 4,354 people were evacuated on Monday in the east

Around 3,854 people arrived in Zaporizhzhia in their own transport. There were 556 people who arrived from the besieged southern port city of Mariupol.

The Russian woman who interrupted a state broadcast with a no-war poster has become a correspondent in Ukraine and Russia for the major German daily Die Welt, the media announced on Monday.

She will write for the newspaper and contribute regularly to its television news channel.

Marina Ovsyannikova “had the courage, at a decisive moment, to confront viewers in Russia with an undiluted picture of reality,” explained Ulf Poschardt, editor-in-chief of the Welt group, in a press release.

“She thus defended the most important journalistic virtues, despite the threat of state repression,” the boss of the conservative daily newspaper added.

Some journalists criticised her appointment, stating that other independent journalists had fled Russia and pointed out she had worked in Russian propaganda for years.

More than 10,000 civilians have died in the southeastern port city of Mariupol since the war began in late February, the city’s mayor told The Associated Press.

Mayor Vadym Boychenko said corpses were “carpeted through the streets of our city” and that the death toll could be more than 20,000.

Boychenko also repeated claims that Russian forces have brought mobile crematoria to the city to dispose of the bodies and accused Russian forces of refusing to allow humanitarian convoys into the city in an attempt to disguise the carnage.

The mayor had previously claimed 5,000 dead. He explained that these data were on March 21, but “thousands more people were lying on the streets, it was just impossible for us to collect them.”

Société Génerale has announced it is ending its Russian activities — making it the first big Western bank to announce it’s quitting Russia.

SocGen is also selling its entire stake in Rosbank to a company linked to a Russian oligarch, costing the French bank some 3 billion euros.

Rosbank is a heavyweight in the Russian banking sector, and Société Génerale was the majority shareholder.

“After several weeks of intensive work,” the bank said in a statement, it had signed an agreement with Russian investment fund Interros Capital to sell all of its stake in Rosbank as well as its insurance subsidiaries in Russia.

Interros is one of the largest funds in the country, which holds assets in heavy industry and metallurgy.

France’s foreign affairs ministry said after an intelligence investigation, six Russian diplomats would be expelled from the country.

The ministry said in a statement that the diplomats’ activities were “revealed to be contrary to our national interest.”

“In the absence of the Russian ambassador, the deputy was summoned to the Quai d’Orsay this evening,” France’s foreign affairs ministry added.

Italian PM Mario Draghi secured a deal Monday for more natural gas imports across a Mediterranean pipeline from Algeria, in the latest push by a European Union nation to reduce dependence on Russian energy following its invasion of Ukraine.

Draghi told reporters in the Algerian capital after meeting with President Abdelmadjid Tebboune that an agreement to intensify bilateral cooperation in the energy sector along with the deal to export more gas to Italy “are a significant response to the strategic goal” of quickly replacing Russian energy.

Russia is Italy’s biggest supplier of natural gas, representing 40% of total imports, followed by Algeria, which provides some 21 billion cubic meters of gas via the Trans-Mediterranean pipeline.

Russia is gearing up for an attack in the Donbas, US Pentagon says

The Pentagon’s latest assessment is that Russia is gearing up for, but has not yet begun, an intensified offensive in the Donbas.

A senior U.S. defence official said the Russians are moving more troops and material toward that area and are focusing many of their missile strikes there. The official spoke on condition of anonymity to discuss internal US military assessments.

The official said a lengthy convoy of vehicles that is headed south toward the eastern city of Izyum contains artillery as well as aviation and infantry support, plus battlefield command-and-control elements and other materials.

The official said the convoy appeared to originate from the Belgorod and Valuyki areas in Russia, which are shaping up as key staging and marshalling grounds for the Russian buildup in the Donbas.

The official said the Russians also are bolstering their presence in the Donbas by deploying in recent days more artillery southwest of the city of Donetsk.

Ukraine has some cutting-edge military hardware at its disposal in its fight against Russia’s invading forces.

That’s largely thanks to deliveries of weaponry from allies looking to help the country bolster its defence.

From anti-aircraft MANPADS, to anti-tank missiles, to a drone so beloved by Ukrainian forces they are singing about it, countries are continuing to send critical equipment to the war-torn country. 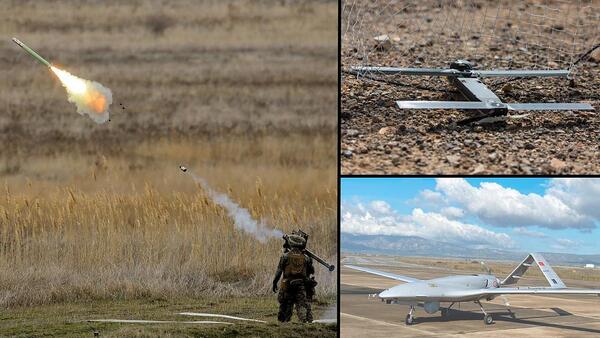 Ukraine has cutting edge weaponry at its disposal in its fight against Russia’s invasion – Copyright AP Photo18:21

Austrian Chancellor Karl Nehammer was received by Vladimir Putin on Monday, a first for a European leader since the start of the intervention in Ukraine, according to a press release issued by his cabinet after the meeting.

“The discussion with President Putin was frank, open and difficult,” Nehammer said after the meeting, which lasted just over an hour and did not result in a handshake, according to Austrian press.

“I spoke about the serious war crimes in Bucha and other places, saying that all those responsible must be brought to justice,” added the Austrian Chancellor.

Bucha is a locality near Kyiv that has become a symbol of atrocities, where Karl Nehammer went this weekend like other Western officials. Moscow has firmly rejected any involvement.

“I made it clear to the Russian President the urgency of setting up humanitarian corridors to bring water and food and to evacuate women, children and the wounded from besieged cities,” the Chancellor said, insisting it was “not a friendly visit”.

‘A rapist in your path’: This Chilean feminist anthem is spreading…

Climate teacher: ‘A changing climate demands a change in…

The Voice Of Holland taken off air over sexual misconduct…