Firemen work inside the regional administration building in the city's central square of Kharkiv, Ukraine, after Russian shelling, March 1, 2022.

Ukrainian authorities have reported more civilian casualties in Kharkiv as Russian forces intensify their bombardment of the country’s second city. Residential areas have been hit.

Moscow has said it plans to target key security infrastructure in Kyiv, warning civilians living nearby to leave. It comes as a long military convoy stretching about 65 kilometres continues to advance towards the capital.

Ukrainian President Volodomyr Zelenskyy called on the European Union during an emotional address to MEPs to “prove that you are with us.”

See the latest updates in our live blog below:

Key things to know on Tuesday

Ukraine’s President Zelenskyy was given a standing ovation by MEPs as he called on the EU to “prove that you will not let us go”, saying Ukrainians are fighting for rights, freedoms and survival”.In intensified Russian shelling of Kharkiv, authorities said at least 10 were killed when the largest public square was hit by a missile, Zelenskyy calling the attack a war crime. Explosions tore through residential areas, with eight people reportedly killed in another airstrike. Moscow says the Russian army is planning to strike infrastructure belonging to the Ukrainian security services in Kyiv and has called on civilians living nearby to flee. A long armoured convoy continues to approach the capital. Vladimir Putin’s forces pressed their attack on other towns and cities across the country, including the strategic ports of Odesa and Mariupol in the south.The UN says more than 660,000 refugees have fled Ukraine in six days and numbers are growing “exponentially”. EU diplomats and their partners at two UN conferences walked out as the Russian foreign minister Sergei Lavrov addressed them by videolink. Monday’s events saw a series of intensified sanctions and bans on Russian economic and sporting activity, leaving Putin increasingly isolated.

The TV tower in Ukraine’s capital has been hit, according to the country’s parliament, which posted a photo of clouds of smoke around it.

Five people were killed and five injured in the strike, said the Ukrainian emergency services on Facebook, adding that broadcasting was interrupted.

Britain is vowing to end London’s status as a haven for oligarchs and their ill-gotten gains with a law intended to prevent the real owners of businesses and properties being hidden from view.

The government said the Economic Crime Bill will force anonymous foreign owners of U.K. property to reveal their real identities ”to ensure criminals cannot hide behind secretive chains of shell companies.” Those who don’t comply face being unable to sell their property or a five-year prison sentence.

Prime Minister Boris Johnson said the measure, which has to be approved by Parliament, would help “tear back the facade that those supporting (Russian President Vladimir) Putin’s campaign of destruction have been hiding behind for so long.”

Successive British governments have promised for years to end London’s status as a safe haven for dirty money, with little effect.

The anti-corruption group Transparency International says Russians linked to the Kremlin or accused of corruption own £1.5 billion (€1.8 billion) worth of London property, and 90,000 properties in Britain are owned by shell companies.

Johnson, who visited Poland and Estonia on Tuesday, said “people’s stomachs are being turned” by Russian bombardments, earlier accusing Putin of using “barbaric and indiscriminate tactics against innocent civilians”. (with AP)

Among an estimated half a million people to flee Ukraine is Piroska Baksa, an 80-year-old grandmother from the village of Chomonyn who walked for seven hours to escape the fighting.Read about her story here: 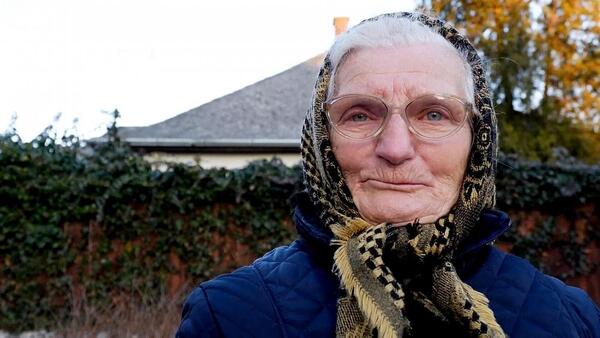 As refugees continue to flee the Russian invasion of Ukraine, this 80-year-old grandmother was forced to make a hard decision – stay in her lifelong home, or leave in search of safety16:59

“All athletes, support personnel and officials from Russia and Belarus will be excluded from all World Athletics Series events for the foreseeable future, with immediate effect,” the sport’s governing body says in a statement.

NATO’s secretary-general, Jens Stoltenberg, spoke to The Associated Press following talks on European security with Polish President Andrzej Duda an air base in Poland where NATO’s Polish and U.S. fighter jets are based.

“We will always do what is needed to protect and defend our allies, but we don’t think there is any need now to change the alert levels of NATO’s nuclear forces,” Stoltenberg said.

The Kremlin has raised the specter of nuclear war, reporting on Monday that its land, air and sea nuclear forces were on high alert following President Vladimir Putin’s weekend order. NATO itself has no nuclear weapons, but three of its members, the United States, Britain and France, do. (AP)

Ukrainian journalist Daria Kaleniuk was overcome with emotion as she questioned UK Prime Minister Boris Johnson  in a briefing during his visit to Poland, over Britain’s plans to help Ukraine on Monday.

She urged Britain and NATO allies to enforce a no-fly zone over her country to protect people from Russia’s bombardment.

“You are talking about the stoicism of the Ukrainian people but Ukrainian women and children are in deep fear because of bombs and missiles coming from the sky,” she said.

“We are asking for a no-fly zone,” she added, “NATO is not willing to defend, because NATO is afraid of the World War III. But it is already started.”

Johnson said the implication of that would be that the UK forces would be engaged in a direct combat with Russians.

“That is not something we can do and that have envisaged,” Johnson said.

Johnson said the the UK was the first European country to offer military assistance, also “doing everything we can to tighten the economic noose around the Putin regime.”

“And I have to tell you, I think that it will work,” Johnson said.

At least eight people were killed and six injured on Tuesday by an airstrike on a residential area in the eastern city of Kharkiv, which has been under assault from Russian forces, Ukrainian authorities said.
“Eight people died, six were injured and 38 people were rescued” after “an airstrike”, the Ukrainian emergency service said on Facebook, posting photos of rescuers working in a damaged building.Earlier, on Tuesday morning, the bombardment of Kharkiv’s central square left at least 10 dead and 20 injured, according to Ukrainian rescuers, who released images of victims extricated from the rubble of the local government headquarters.
At least 11 people were killed in the city on Monday. (AFP)16:22

The European Court of Human Rights (ECHR), called upon by Kyiv, has called on Russia to refrain from attacking civilians and civilian targets.”The Court has decided to indicate to the Government of Russia to refrain from military attacks against civilians and civilian objects, including residential premises, emergency vehicles and other specially protected civilian objects such as schools and hospitals, and to ensure immediately the safety of the medical establishments, personnel and emergency vehicles within the territory under attack or siege by Russian troops,” it said.16:11

German Chancellor Olaf Scholz on Tuesday called on Russian President Vladimir Putin to stop the fighting in Ukraine immediately, withdraw his troops and return to dialogue.

Scholz said after meeting Luxembourg’s prime minister in Berlin that “the bloodshed must come to an end — Vladimir Putin is assaulting the Ukrainian people.”

The chancellor pointed to the economic effects of sanctions that have already been imposed on Russia and said that more will follow. He didn’t give details.

Scholz deflected a question about whether NATO should respond to Putin’s decision to put Russia’s nuclear forces on high alert, saying that the focus needs to be on stopping fighting that is likely to get worse.

He said that “Ukraine is literally fighting for survival” and reports of large-scale Russian troop movements suggest that “this will be a very, very dramatic time.”

Scholz added: “The pictures we have lamented so far … will only be the beginning of what is probably still coming.” (AP)

COVID-19 vaccine trial participants report side effects even with placebos

Watch: Chefs team up with archaeologists to cook up…