Servicemen of the militia from the Donetsk People's Republic walk past damaged apartment buildings in an area of Mariupol controlled by Russian-backed separatists.

Russian forces have now shifted their focus to the offensive in the eastern Donbas region of Ukraine.

Heavy shelling and fighting has continued in the east as Russia’s army attempts to establish control over the region.

Read the latest updates from Ukraine in our blog below and watch our TV coverage in the video player above.

Satellite images released Thursday showed what appeared to be mass graves near Mariupol, and local officials accused Russia of burying up to 9,000 Ukrainian civilians there in an effort to conceal the slaughter taking place in the siege of the port city.

Ukraine’s President Zelenskyy has said some 120,000 civilians are still trapped in the besieged port city. Just a handful of buses evacuating civilians arrived in Zaporizhzhia after leaving Mariupol earlier.

Vladimir Putin told Russian forces to lay siege to the last Ukrainian fighters in Mariupol rather than storming the industrial site where they are holding out, “in such a way that not a single fly would pass”.

Joe Biden says it is “questionable” that Russia controls the city, after Moscow said earlier that it had been “liberated”.

A Russian armed forces general said that one of the tasks of Russia’s army was to “establish full control over Donbas and southern Ukraine.”

Deputy commander of Russia’s central military district, Rustam Minnekayev, was cited by Russian media as saying that control of the Donbas would allow for a land bridge to the Crimea peninsula.

UN documents murder of 50 civilians in Bucha, outside Kyiv

The UN said they had documented the murder of 50 civilians in the town of Bucha outside the capital city of Kyiv, a spokesperson said on Friday.

Spokesperson Ravina Shamdasani said at a UN briefing that investigators confirmed that some of the 50 civilians had died in a summary execution.

Sweden is helping Ukraine to rebuild “a secure electricity supply” by sending equipment to repair electricity networks destroyed during the war.

Svenska kraftnät, the authority responsible for Sweden’s electricity transmission system, received a request from Ukraine via the European Network of Transmission System Operators to contribute equipment for repairing electricity networks.

The equipment to Ukraine will be taken from Sweden’s emergency stock that exists for the repair of electricity networks and won’t affect the Swedish emergency preparedness request, the energy ministry said in the statement on Thursday.

Russia and Ukraine square off over food crisis at UN

Russia and Ukraine squared off at the United Nations on Thursday over whether Russia’s war is to blame for rising food prices and hunger around the world.

Between them, the two countries account for nearly a third of global wheat and barley exports and millions of people in the Middle East, Africa and parts of Asia depend on them for affordable bread and noodles. Ukraine also is a major corn supplier and the biggest exporter of sunflower oil.

“As long as Russia persists in its efforts to invade Ukraine, the threat of hunger will be looming over many countries throughout the globe,” Ukrainian counsellor Natalia Mudrenko said Thursday at an informal UN Security Council meeting to discuss conflict and hunger.

Chumakov said Russia’s critics were trying to deflect focus from sanctions and the “economic egoism of the developed countries during the pandemic.

The UK ministry of defence said in its latest defence intelligence update that Russia was still “suffering from losses sustained earlier in the conflict.”

They are “resorted to transiting inoperable equipment back to Russia for repair,” the UK ministry added.

The update also offered an explanation for why Putin decided yesterday that Russian troops will blockade the last Ukrainian holdout in Mariupol instead of storm it.

They said it was likely to “free up Russian forces to be deployed elsewhere in eastern Ukraine” as storming the Ukrainian stronghold “would likely incur significant Russian casualties”.

There was “heavy shelling and fighting” in the eastern Donbas as Russia works to advance further in the region, they added.

At least 594 children killed or injured due to war in Ukraine, country’s parliament says

At least 594 children have been killed or injured due to the war in Ukraine, officials said.

Ukraine’s parliament said that 208 children have died and 386 have been injured.

The World Bank said that the cost of physical damage to Ukraine’s buildings and infrastructure was roughly $60 billion (€55.3 billion), according to its early assessment.

The international financial body said that in the 6-8 months after peace, there will be a need to reconstruct essential infrastructure such as power, heating and digital and then “over the medium term” rebuild cities and households.

A month into Moscow’s invasion of Ukraine, Dmytro Fedorchak threw a bucket of red paint on a statue of Russian poet Alexander Pushkin in the centre of his hometown, the western city of Ternopil.

“I wrote (on the statue) that we should demolish it. That the war in Ukraine should stop,” 28-year-old Fedorchak told Euronews.

“I never could explain why we had a statue of Pushkin here. He isn’t even from Ukraine.”

Ternopil authorities removed the statue in April as other regions in Ukraine have started to question why monuments from Soviet times remain after Russia invaded the country in February.

“Pushkin doesn’t have anything to do with what we need to build here in Ukraine, like our own culture,” says Fedorchak, who works as an IT manager. 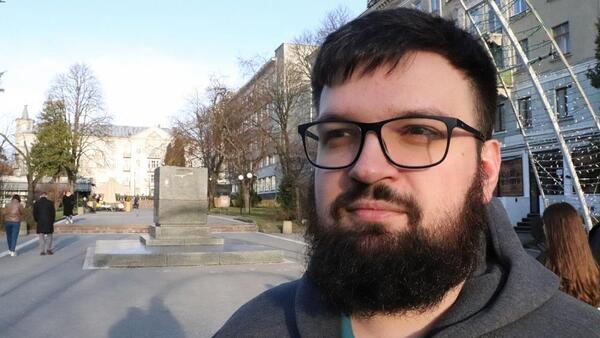 Dmytro Fedorchak, 28, in front of the now-removed statue of Alexander Pushkin in Ternopil – Copyright Euronews/Stefan Weichert07:08

“This shows very well how the leaders of this state actually treat the Christian faith,” Zelenskyy said.

He said that they still had hope for peace.

Study: Antidepressants may not improve overall well-being in depressed people

Tough or impossible? The next 10 days are critical for PM’s deal

Pakistan ambassador to EU calls for international donor conference to…

Greater risk of Alzheimer’s may be linked to gut disorders,…