NATO heads of state during an extraordinary NATO summit at NATO headquarters in Brussels, March 24, 2022.

After the failure of their initial invasion to make significant headway, Vladimir Putin’s forces have resorted to bombarding towns and cities from distance, causing massive death and destruction.

Amid Europe’s worst refugee crisis since World War II, millions of Ukrainians have fled their homes to safer parts of the country, or abroad.

See below for the latest developments on the day leaders met in Brussels. Watch our special TV coverage — including from Lviv in Ukraine — in the video player above.

Western leaders have met for three summits, with NATO, the G7 and EU all discussing the war in Ukraine.”NATO has never, never been more united than it is today,” said Joe Biden. “Putin is getting exactly the opposite of what he intended.”The US president also said he wanted Russia out of the G20, and that a Russian chemical weapons attack in Ukraine would “trigger a response in kind”.NATO leaders agreed a major boost to forces along the alliance’s eastern flank to deter Russia over the long-term. More military support for Ukraine was also agreed including help to deal with a chemical weapons attack.Ukraine’s President Zelenskyy demanded NATO give Kyiv “one per cent” of its weapons, including fighters jets, tanks and air defence equipment.Zelenskyy also called for global protests as he marked one month since Russia began its invasion of Ukraine.Ukraine’s navy says it has sunk the Russian ship Orsk in the Sea of Asov near Berdyansk. Photos and video show fire and thick smoke coming from the port area.More than half of Ukrainian children have been displaced since Russia invaded Ukraine, says the UN Children’s Fund (UNICEF).The US and UK targeted new Russian individuals and entities with sanctions.The UN General Assembly overwhelmingly adopted a resolution blaming Russia for the humanitarian crisis in Ukraine, and urging an immediate ceasefire.

EU leaders praise unity for Ukraine and against Russia

German Chancellor Olaf Scholz says the world is united in its response to the Russian attack on Ukraine last month and said that sanctions against Russia were proving to be powerful.

Scholz told reporters in Brussels Thursday after the NATO summit that “we are united in our commitment to see these sanctions through as long as necessary and to keep reviewing them for effectiveness.”

Scholz also said that Germany has committed to giving €370 million to Ukraine in humanitarian aid and pledged another €430 million for the global food supply to help prevent famines.

He called on the international community to help Europe shoulder the burden of the millions of refugees arriving from Ukraine.

Draghi told reporters during a break in gatherings on Thursday that the unity pertained to both applying the sanctions against Russia as well as to ”deciding to toughen them if necessary.”

He described as “unanimous” the analyses by summit participants that the sanctions are being “extraordinarily effective. The Russian economy is strongly weakened.”

As for the drama of the millions of refugees from Ukraine, Draghi said the feeling among participants was that the humanitarian drama must be managed, in addition to on a European level, also on world level, with the full involvement of the United Nations.

Regarding China, ’’there was no condemnation, on the contrary, there was the hope that China contributes to the peace process,” the Italian leader said.

Bulgaria’s Prime Minister Kiril Petkov said Thursday that his country will recall its ambassador to Moscow for consultations in response to a succession of statements by Russia’s ambassador that have deeply offended Bulgaria’s government.

Petkov said the move comes on the heels of ”undiplomatic, sharp and rude” statements made by Ambassador Eleonora Mitrofanova.

The latest was on Monday, when Mitrofanova said in an interview with Russia 24 TV channel that “the people of Bulgaria do not support the rhetoric and actions of their government regarding Russia’s special operation in Ukraine.”

Thousands of people took to the streets of Bulgaria’s capital, Sofia, on Thursday to protest Russia’s invasion of Ukraine and to show solidarity with Ukrainians.

The rally, organized on social networks, followed Ukrainian President Volodymyr Zelenskyy’s call on people around the world to protest the month-long war.

Some of the 60,000 refugees from Ukraine joined the demonstration. Waving Ukrainian and European flags, protesters chanted “Stop the war,” “Stop Putin” and “Freedom for democratic Ukraine.”

The organizers of the event said that it was time for Bulgaria to come out in large numbers in support of a sovereign Ukraine. (AP) 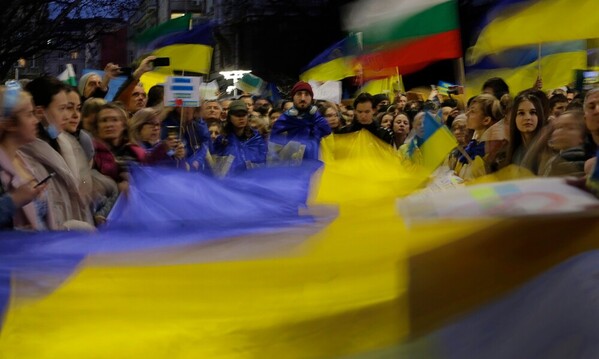 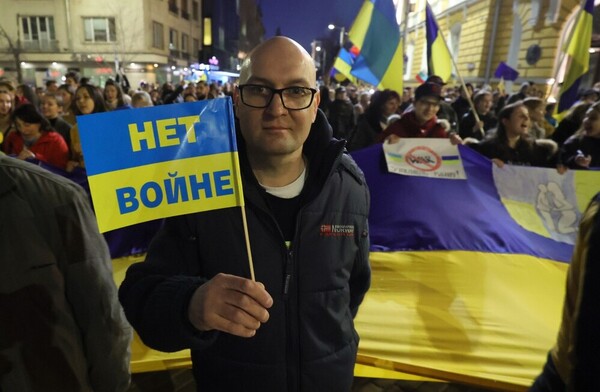 Russians and Ukrainians exchanged prisoners on Thursday, according to the Ukrainian Deputy Prime Minister Iryna Vereschuk and the Russian human rights delegate.

“In exchange for ten captured occupants, we got back ten of our military,” Ukraine’s Iryna Vereschuk wrote, saying it was the “first real exchange of prisoners of war” with Russia since the start of its offensive in Ukraine.

In addition, 11 Russian civilian sailors, survivors of a ship that sank in the Black Sea near Odessa, were sent to Russia against the return to Ukraine of 19 civilian sailors captured by the Russians.

On Wednesday, the Russian Foreign Ministry said that two exchanges had already been organised since the start of the Russian invasion, without however specifying their dates or the number of prisoners concerned.

Vereschuk confirmed the exchange concerning the mayor of Melitopol on Wednesday, but she added that there had been no other.

Macron: French firms ‘free to decide for themselves’ over Russia operations

French President Emmanuel warned about “reputation risks” for French companies which are operating in Russia but said they are free to make their own choices.

“My position is to let the companies free to decide for themselves. That’s up to the companies’ leadership to assess” the situation, he said Thursday in a news conference in Brussels.

Macron’s remarks come after French automaker Renault announced plans to pause production at its Moscow plant in an apparent move to fend off mounting criticism.

Macron said he requested all French companies operating in Russia to comply with EU sanctions.

Ukraine’s President Volodymyr Zelenskyy has called on French multinationals to stop indirectly supporting the war against Ukraine by leaving Russia, in a speech to the French parliament on Wednesday.

The Ukrainian parliament has passed a much-anticipated bill that makes “collaboration” with Russia punishable by up to 12 years in prison.

The text was adopted by 350 votes for, none against and 39 abstentions, according to a press release published on the Rada website.

It adds to the Ukrainian penal code in force a new article entitled “Aid and complicity with the aggressor state”, which punishes “from 10 to 12 years” in prison any “cooperation” with “the enemy”, its administration and its armed forces or paramilitary groups.

In addition to the prison sentence, those convicted will be banned from holding administrative positions, including local ones, for up to 15 years and may have their property confiscated.

It is the first law of this kind to have been passed by the Ukrainian Parliament since the start of the Russian attack on February 24.

“It is a just sanction against those who help the aggressor,” said Olena Chouliak, the leader of the presidential party “Servant of the people”.

The prosecutor’s office in Kherson, a southern city occupied by the Russian army, immediately announced on Telegram that it had opened an investigation against “two residents” of Nova Kakhovka, 80km further east, suspected of “helping of their own free will” the invading forces.

More than 360 Ukrainian deputies met Thursday for the first time in a month in the hemicycle of the Rada, in downtown Kyiv, near the Dnieper river.

France to provide experts to probe war crimes in Ukraine

“France and the European Union support the (International Criminal Court) prosecutor’s action Karim Khan and will provide judges, investigators and experts,” he added.

The country will also provide €500,000 in financial assistance to lead the investigation.

Belarus’ authoritarian leader has warned that a Polish proposal to deploy a Western peacekeeping force in Ukraine could trigger World War III.

President Alexander Lukashenko, who has allowed his ally Russia to use Belarus’ territory to launch an invasion of Ukraine, pointed Thursday at Poland’s offer of a peacekeeping mission made last week, saying “it will mean World War III.”

“The situation is very serious and very tense,” he added.

Lukashenko’s comment follows Russian President Vladimir Putin’s warning at the start of the invasion of Ukraine that any foreign interference with Moscow’s military action would trigger an immediate Russian response that will lead to “the consequences you have never seen in your history.” A few days after the start of the invasion, Putin ordered to put Russia’s nuclear forces on special regime of combat duty.