Poll finds majority of Swedes are in favour of joining NATO, as country deliberates membership of the defensive alliance 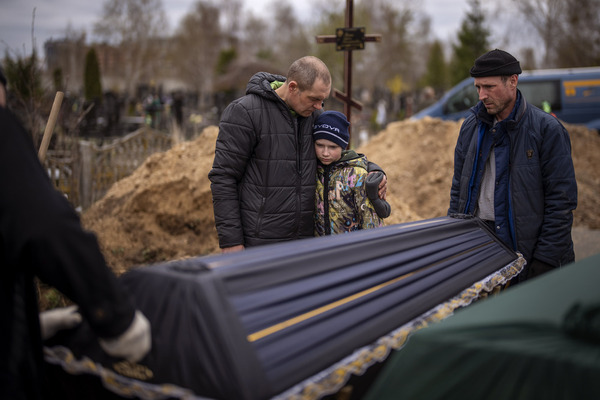 Vova, 10, looks at the coffin carrying body of his mother, Maryna, as his father, Ivan Drahun, hugs him during her funeral in Bucha, on the outskirts of Kyiv, on Wednesday, April 20, 2022.15:00

Russia will “act consistently” to make sure that life in Ukraine’s eastern industrial heartland “normalises,” President Vladimir Putin said Wednesday, speaking at a meeting with members of a state-funded non-profit group.

Putin said that hostilities in eastern Ukraine, where Russia-backed rebels have been fighting Ukrainian forces since 2014, prompted Russia to launch its military operations.

“All these eight years, bombing, artillery strikes and hostilities continued there. And of course, it was very, very hard for people,” he said. “The goal of the operation is to help our people living in Donbas.”

Estonia says it is prohibiting public meetings where people display Russian flags and military symbols during the Victory Day celebrations on 9 May, which is traditionally celebrated by the Baltic country’s sizeable ethnic-Russian population to mark the end of World War II.

“The Estonian state has so far been tolerant of the events of May 9, but Russia’s current activities in Ukraine preclude public meetings in Estonia expressing support for the aggressor state and displaying war symbols,” Police and Border Guard chief Elmar Vaher said Wednesday.

Police said Wednesday that commemorating those killed in World War II wasn’t forbidden in the country but “it’s not to be used to incite violence and hatred between people.”

Among the banned symbols are the flags of the Soviet Union and Russia, USSR military uniforms and the black-orange Ribbon of Saint George worn in Russia to mark the Soviet Union’s victory over Nazi Germany in World War II.

The ban is valid until May 10 and applies to the capital, Tallinn, and its surrounding areas.

Ethnic Russians make up about 25% of Estonia’s 1.3 million population and they traditionally gather to lay flowers on 9 May at Tallinn’s Bronze Soldier statue commemorating the fallen Red Army troops in World War II battles in Estonia.

Cyprus is revoking the citizenship of four sanctioned Russians, authorities said on Wednesday, according to Reuters, bringing the number of passports rescinded by the EU member state to eight this month. The individuals were not named, in keeping with government policy.

Cyprus gave citizenship to 2,886 Russian nationals between 2007 and August 2020, as part of a now discredited cash-for-passports scheme.

Cyprus’ cabinet previously revoked the citizenship of four Russians on 7 April, after they were named on the list of individuals sanctioned by the EU over Russia’s invasion of Ukraine.

Passports would also be revoked from their families, deputy government spokeswoman Niovi Parisinou said in a statement.

Majority of Swedes in favour of joining NATO: Poll

A growing majority of Swedes are in favour of joining NATO, a poll showed on Wednesday, as policy-makers in both Sweden and Finland weigh up whether Russia’s invasion of Ukraine should lead to an end to decades of military neutrality.

The poll by Demoskop, and commissioned by the Aftonbladet newspaper, showed 57% of Swedes now favoured NATO membership, up from 51% in March. Those opposed to joining fell to 21%, from 24%.

The March poll was the first to show a majority of Swedes in favour of joining NATO.

Sweden has built its security policy on “non-participation in military alliances”. But like Finland, the invasion of Ukraine has forced a radical rethink. Both countries are now seen as highly likely to join the 30-nation alliance.

The Demoskop poll consisted of 1,177 interviews carried out between April 14 and April 19.

The Kremlin’s spokesman says Russia has presented Ukraine with a draft document outlining its demands as part of peace talks and is now awaiting a response from Kyiv.

Dmitry Peskov told a conference call with reporters Wednesday that Russia has passed on a draft document containing “absolutely clear, elaborate wording” to Ukraine and now “the ball is in their court, we’re waiting for a response.”

Peskov didn’t give further details. He blamed Ukraine for the slow progress in negotiations, and claimed that Kyiv constantly deviates from previously confirmed agreements. “The dynamic of work on the Ukrainian side leaves much to be desired, the Ukrainians do not show a great inclination to intensify the negotiation process,” he said.

Ukraine presented Russia with its own draft last month in Istanbul, where the two sides held talks aimed at ending the conflict. It has been unclear how regularly the two sides have spoken to each other since then.

What are the steps to join NATO?

Finland and Sweden are moving closer to NATO membership. But what exactly are the steps to join? 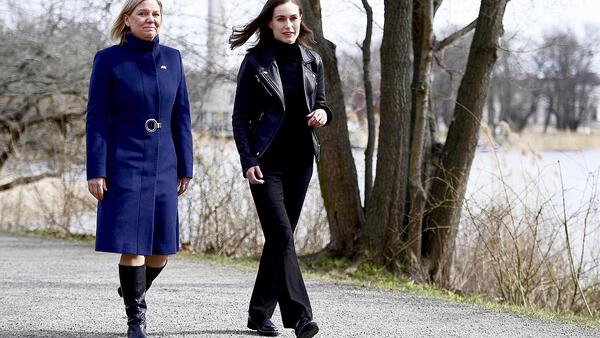 Russia’s latest ultimatum to Ukrainian fighters in the besieged city of Mariupol expired Wednesday afternoon, with no sign of a mass surrender, according to Reuters.

In a statement published Tuesday, the Russian military demanded that Ukrainian defenders of Mariupol lay down their arms from 2:00 p.m. (Moscow time) on Wednesday, 20 April.

This deadline has now passed.

But Ukrainian resistance is continuing, with troops holding out in Maripol’s Azovstal power plant.

Earlier Wednesday morning a Ukrainian commander at the plant issued a desperate plea for help, saying his marines were “maybe facing our last days, if not hours.”

“The enemy is outnumbering us 10 to one,” he added.

Thousands of Russian troops backed by artillery and rocket barrages are attempting to capture Mariupol as part of what Ukrainian officials have called the Battle of the Donbas.

Russia’s nearly eight-week-long invasion has failed to capture any of Ukraine’s largest cities.

Berlin has not disclosed all of the weapons it sent to Ukraine, Germany’s foreign minister said.

“We have delivered anti-tank missiles, Stingers and other things that we have never spoken about publicly so these deliveries could happen quickly,” said Annalena Baerbock at a news conference in Riga, Latvia, which was reported on by Reuters.

She added that Germany would help Kyiv maintain more advanced weapons systems it may buy, alongside training Ukrainian soldiers on how to use them.

Asked whether Germany would send its Panzerhaubitze 2000 artillery system to Ukraine, Baerbock said Germany would train Kyiv’s soldiers on using and maintaining more advanced systems, which it might obtain from other allied countries or buy outright.

Some experts say Ukraine needs this powerful artillery system to mount a counterattack against Russian forces in the country’s east.

PM’s charm offensive yet to convince investors to part with…