Ukraine war: Russia to ‘scale back military operations in Kyiv and Chernihiv’

Turkish President Recep Tayyip Erdogan, centre, gives a speech to welcome the Russian, left, and Ukrainian delegations ahead of their talks, in Istanbul, Turkey.

With Russia’s war in Ukraine into its second month, there has been movement at peace talks in Turkey.

As Moscow’s military offensive stalls in the face of strong Ukrainian resistance, Putin’s forces have been continuing to pound targets from afar.

Follow our blog below for the latest developments, or watch Euronews in the video player above.

Russia will scale back its military operations in Kyiv and Chernihiv, say Russian negotiators, amid a switch to focus on Donbas in eastern Ukraine.Ukraine wants an international agreement that would see several countries guarantee its security.Both developments came as Ukraine and Russia held a new round of peace talks in Istanbul. Turkey says there has been “meaningful progress”.Washington struck a note of caution, US Secretary of State Antony Blinken warning “there is what Russia says, and there is what Russia does”.The talks come as Ukraine claims to have been retaking ground from Russian forces in some areas. Kyiv says it has “liberated” the town of Irpin, near the capital, while the US believes the Ukrainians have also retaken Trostyanets, south of Sumy, in the east.Russia planning to deploy 1,000 Wagner mercenaries to eastern Ukraine, says MoD.Russian Oligarch Roman Abramovich — seen as Tuesday’s talks” — and two Ukrainian peace negotiators were the victims of a suspected poisoning at previous negotiations earlier in March.Ukraine has reopened “humanitarian corridors”, having suspended evacations on Monday for fear that Russia may attack civilians using them.Mariupol officials have estimated that 5,000 people have died in the besieged city since the Russian invasion. The mayor has warned of a “humanitarian catastrophe’ if evacuations continue to be blocked.

Ireland has said it is expelling four Russian diplomats on the grounds that their activities are “not in accordance with international standards of diplomatic behaviour”.

Racist videos of Africans fuel a million-dollar industry in…

Analysis: Italy and the politics of a global food crisis

“This afternoon, the Department of Foreign Affairs summoned the Russian Ambassador to Iveagh House to advise him that four senior officials have been asked to leave the State,” a statement said.

It added that channels of communication between Dublin and Moscow would remain open, “important in the context of conveying our strong views on the Russian Federation’s war against Ukraine, which we regard as a serious breach of international law”.

Ireland is applying EU sanctions on Russia but has refused to supply lethal weapons directly to Ukraine, citing its military neutrality.

The US Secretary of State Antony Blinken has said he has not seen “signs of real seriousness” from Russia in pursuing peace in Ukraine since it launched its invasion.

Speaking from Rabat in Morocco, he sounded a large note of caution amid reports of progress at the talks in Istanbul.

“I would leave it to our Ukrainian partners to characterise whether there is any genuine progress, and whether Russia is engaged, engaging meaningfully,” he said.

Belgium has decided to expel 21 people working for the Russian embassy and consulate due to their “involvement in espionage and influence operations threatening national security”, Foreign Minister Sophie Wilmès said on Tuesday.

The minister published the statement on her Twitter account shortly after makng an announcement to a parliamentary committee, adding that those concerned must leave Belgian territory within 15 days.

The spiritual leader of the world’s Orthodox Christians, Ecumenical Patriarch Bartholomew, met Ukrainian refugees in Warsaw on Tuesday to show them his solidarity and denounce the aggression against their country.

Without mentioning Russia by name, he described as “unimaginable” the destruction caused “by this horrific invasion, in the Ukrainian nation and in the whole world”, in a speech at the Stefan Wyszynski Catholic University,

Patriarch Bartholomew is in Poland at the invitation of President Andrzej Duda, whom he met on Monday. Upon his arrival he denounced the war in Ukraine as “unjust” and “unfounded”.

“If any war deserves condemnation, a war between Orthodox is absolutely unacceptable,” said the 82-year-old religious leader who came to an Orthodox church in Warsaw to pray for peace, before deploring “the crisis of unity” Orthodox Christians are currently experiencing.

In Ukraine, the majority Orthodox population is divided between the faithful of the Russian Orthodox Church and a new independent church based in Kyiv.

Patriarch Bartholomew formally recognised the new church’s independence in 2019, which provoked a violent reaction from the Moscow hierarchy, which severed all its links with Constantinople. Patriarch Kirill, the leader of the Russian Church and longtime Putin supporter, has backed the Russian invasion of Ukraine.

Biden to speak on phone to several European leaders

US President Joe Biden will speak to European leaders on Tuesday about the war in Ukraine, the White House has announced.

The phone call, scheduled for Tuesday morning EDT, Tuesday afternoon CET, with the French, British, German and Italian leaders, aims to “discuss the latest developments regarding the Russian invasion of Ukraine”, said a spokesperson.

Even as the negotiators assembled in Istanbul, Russian forces hit an oil depot in western Ukraine and demolished a government building in the south, with several deaths.

A missile struck the oil depot late Monday, the second attack on oil facilities in a region that has been spared the worst of the fighting. On Tuesday morning, an explosion blasted a hole in a nine-story administration building in Mykolaiv, a southern port city that Russia has unsuccessfully tried to capture.

Seven people died in the missile attack and 22 were wounded, Zelenskyy said in an address to Danish lawmakers.

“It’s terrible. They waited for people to go to work” before striking the building, said regional governor Vitaliy Kim. “I overslept. I’m lucky.”

The head of the International Federation of Red Cross and Red Crescent Societies says an estimated 18 million people in Ukraine will need humanitarian aid amid the devastation and displacement after Russia’s invasion.

He told reporters at a U.N. briefing in Geneva Tuesday that “no one in Ukraine is left unscathed by the ongoing conflict.”

At the same briefing, spokesman Ewan Watson of the International Committee of the Red Cross – a sister organization which focuses on conflict and the rules of war — said “time is running out” for civilians in Mariupol and other frontline areas that have recently been unable to receive humanitarian aid.

The World Health Organization representative in Ukraine, Dr. Jarno Habicht said the U.N. health agency has tallied 74 attacks on health care – including medical facilities, ambulances and health workers – that have killed 72 people so far in the conflict.

‘Most meaningful progress’ since start of peace talks

Here’s our write-up of today’s developments in Istanbul at the face-to-face negotiations between Russian and Ukrainian delegations: 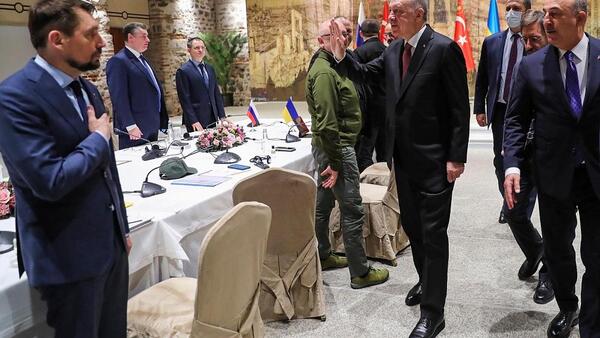 euronewsThe progress made seems to have shifted the needle on a possible meeting between Volodymyr Zelenskyy and Vladimir Putin.

Fact check: Ukrainian protesters were not dragged off a road in Italy