Satellite photographs released on Monday appear to rebut Russian assertions that dead bodies in civilian clothing found in Bucha had appeared there after Russian forces retreated from the devastated Ukrainian town. Ukrainian President Volodymyr Zelenskyy, who visited Bucha on Monday, will speak to the UN Security Council for the first time on Tuesday at a meeting certain to focus on what appear to be deliberate killings of civilians by Russian troops.Moscow has claimed the scenes were faked and says it will present evidence to the UN Security Council.Zelenskyy’s spokesperson told Euronews there are fears that similar massacres could occur elsewhere as Russian troops retreat towards Belarus. Ukraine’s prosecutor-general has said a “similar humanitarian situation” to Bucha exists in other areas where Russian forces recently left, such as around the northern cities of Sumy and Chernihiv.EU leaders Ursula von der Leyen and Josep Borrell will visit Kyiv this week to meet Zelenskyy, the Commission president’s spokesman says.The EU, the UK and the US have promised further sanctions against Moscow in the wake of mounting evidence of Russian atrocities. President Biden branded Vladimir Putin a “war criminal” on Monday and called for a “war crimes trial”.Ukraine’s latest daily military report suggests Russian forces are preparing for a major attack in eastern Ukraine. The city of Kramatorsk was bombarded overnight.Germany, France and Lithuania all took action on Monday to expel Russian diplomats, followed on Tuesday by Denmark, Italy, Spain and Sweden.Ukrainian Deputy Prime Minister Iryna Vereshchuk said seven humanitarian corridors were to open on Tuesday from Mariupol and Berdyansk, addng that more than 1,550 civilians were evacuated from Mariupol on Monday.

Satellite images released by Maxar Technologies on April 4, 2022 show views of streets in Bucha, on the outskirts of Kyiv in Ukraine.

The photos taken on March 31 seem to show bodies lying in the streets, before Russian forces retreated from the devastated Ukrainian town.

They give the lie to Russian assertions that dead bodies in civilian clothing found in Bucha had appeared there afterwards.

The Russian government and pro-Kremlin media have claimed that Russian troops left Bucha on March 30, and that the bodies were first documented only on April 3.

But on April 1, Russian media outlet Zvezda TV reported that Russian marines were still carrying out operations in areas including Bucha. The Irpin-Bucha-Hostomel Telegram channel published video showing bodies in the streets, also on April 1. The same day, a Kyiv regional authority report listed the town as among the most dangerous areas due to the presence of Russian forces. The BBC reported on April 1 that at least 20 bodies were seen lying in the street as Ukrainian military entered the town. A Ukrainian military report on March 31 said Bucha was still under Russian control.

Independent journalists have seen, filmed and photographed the bodies found in Bucha and elsewhere, some in areas occupied by Russian forces only hours before. The investigative site Bellingcat and the US think tank the Atlantic Council have published detailed fact-checks contesting the Russian claims.

On Monday Associated Press journalists in Bucha counted dozens of corpses in civilian clothes and apparently without weapons, many shot at close range, and some with their hands bound or their flesh burned. 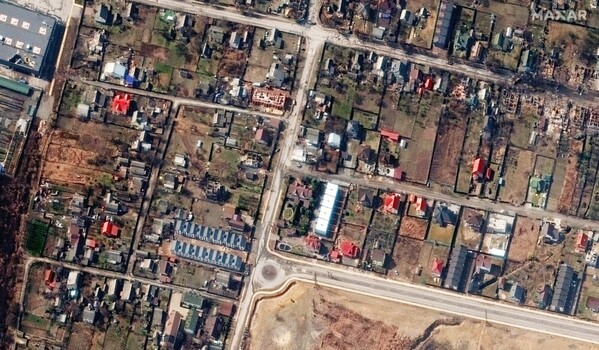 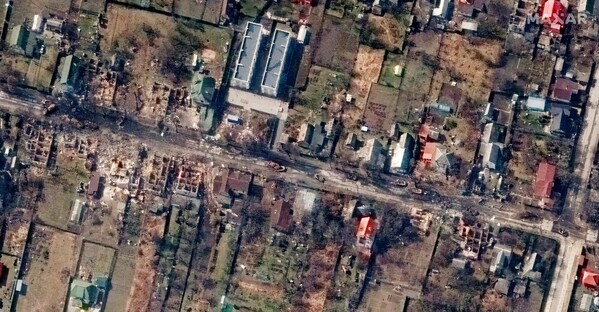 This handout satellite image released by Maxar Technologies on April 4, 2022 shows destroyed homes and vehicles on Vokzalna Street in Bucha, Ukraine, on March 31, 2022.14:21

The governor of eastern Ukraine’s Luhansk region has urged residents to stay inside, shut windows and doors and prepare wet face masks after a Russian strike hit a tank containing nitric acid.

Serhiy Haidai said on the messaging app Telegram Tuesday that the incident occurred near the city of Rubizhne, which the Ukrainian military says the Russians have been trying to take over. He didn’t specify what area the warning applies to.

Haidai warned that nitric acid “is dangerous if inhaled, swallowed and in contact with skin and mucous membranes.” The Russian military has not commented on the claim, and it could not be verified independently.

The UN migration agency now estimates that more than 11 million people have fled their homes in Ukraine since Russia’s invasion.

The International Organization for Migration, in its first such full assessment in three weeks, reported Tuesday that more than 7.1 million had been displaced within Ukraine as of April 1. That comes on top of the figure of more than 4 million who have fled abroad, reported by the UN refugee agency.

IOM said more than 2.9 million others are actively considering “leaving their place of habitual residence due to war.”

Ukraine had a pre-war population of 44 million.

The tally marked an increase from IOM’s tally in mid-March of more than 9.7 million displaced internally in Ukraine or driven abroad.

Italy, Spain and Sweden in turn expelled dozens of Russian diplomats on Tuesday, marking a further deterioration in relations with Moscow after the discovery of civilian massacres attributed to Russian forces near Kyiv .

Italy has decided to expel 30 Russian diplomats for “national security” reasons in the light of Russia’s “unjustified aggression of Ukraine”, Italian Foreign Minister Luigi Di Maio said during a visit to Berlin.

Spain has in turn decided to expel “immediately” around 25 Russian diplomats who posed a “threat to the interests” of the country, the foreign minister announced on Tuesday.

Earlier in the day Denmark said it was expelling 15 diplomats. (see earlier post)

These countries follow France and Germany who said on Monday that they were expelling Russian diplomats amid the outcry over the Russian invasion of Ukraine, and in particular the recent discoveries in Bucha which appear to show civilians having been massacred by Russian troops.

Lithuania has said it is expelling the Russian ambassador to the country, while in late March Belgium, the Netherlands and before them Poland all moved to kick Russian diplomats out of the country.

According to a tally by AFP, EU countries have moved to expel some 233 Russians since the start of the invasion, 150 of them in the past 48 hours.

On Tuesday Moscow denounced a “lack of foresight” on the part of the Europeans.

“We regret it. The reduction in the possibilities of communicating at the diplomatic level in these difficult conditions” denotes a “lack of foresight which will further complicate the communication needed  to find solutions”, Kremlin spokesman Dmitry Peskov told reporters.

“And that will inevitably lead to retaliatory measures,” he added.

Japanese Foreign Minister Yoshimasa Hayashi returned to Tokyo on Tuesday with 20 Ukrainians on board his official plane.

The group fled their homeland after the Russian invasion, and had contacted Japanese embassies in Ukraine and Poland looking for help, but had difficulties arranging their own transportation to Japan.

The Ukrainians will now go to their onward destinations — some to towns where their relatives are already living, while others will go to government facilities.

Foreign Minister Hayashi has been on a visit to Poland where he visited Ukrainian refugees and held talks with Polish officials on how Japan can provide support.

“As I observed the severe situation faced by Ukrainians who were forced to flee their country because of the Russian invasion, I have renewed my resolve that Japan should cooperate with international society and provide the utmost assistance so they can return to ordinary lives as soon as possible” Hayashi told reporters.

Japan has an extremely strict refugee policy and has been reluctant to fully accept migrant workers, making its offer to accept Ukrainians unusual. However, the government has carefully called them evacuees and it is still unclear if the Ukrainian situation will change its immigration policy.

Tokyo expects the 20 evacuees will stay in Japan for at least six months, and will provide further support if needed, said Deputy Justice Minister Jun Tsushima, who was traveling with Hayashi.

Tokyo has previously accepted about 300 other Ukrainians, all relatives of about 2,000 Ukrainian residents in Japan who arrived on their own since the Russian invasion began.

Foreign Ministry officials have said most Ukrainian war-displaced have ties to Europe and they hope to return when the situation allows, indicating Japan is not treating them as refugees seeking permanent residency and protection.

The images emerging from the Ukrainian town of Bucha, where dozens of bodies were discovered after the withdrawal of Russian forces “point to deliberately targeted civilians” according to the Office of the United Nations High Commissioner for Human Rights.

“All signs point to the fact that the victims were deliberately targeted and killed directly. And this evidence is very disturbing,” said spokesperson Elizabeth Throssell on Tuesday during a regular UN press briefing in Geneva.

“We have to investigate, but if we can understand that a building, for example, is hit in a military context, it is difficult to imagine what would be the military context of an individual lying in the street with a bullet in the head or ‘to have their bodies burned,’ she said.

The High Commission doesn’t currently have any staff on the ground in Bucha.

Ukraine accuses Russian soldiers of having massacred civilians, something which Moscow categorically denies, and says Ukrainian authorities of staging the scene.

Billionaire Viktor Vekselberg, an oligarch with close ties to Vladimir Putin, has had his yacht seized in Spain as part of sanctions imposed following the Russian invasion of Ukraine.

On Monday Euronews reported that US federal agents and Spain’s Civil Guard had searched the vessel. 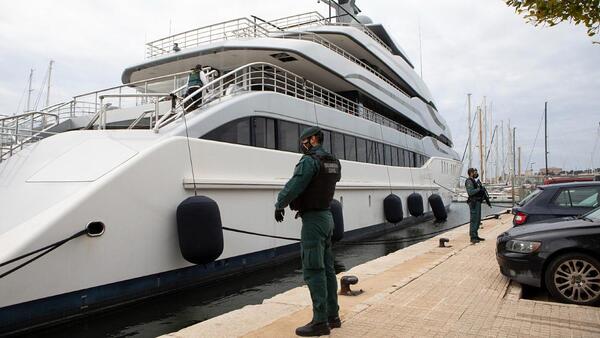 The 78-metre yacht, called Tango, is thought to be worth €109 million.

Vaccinated patients with blood cancers are at higher risk of breakthrough COVID than other cancers, study says