A viral video claims to show hundreds of jars of mustard piled in a warehouse.

In the midst of a mustard shortage, a viral video has generated online speculation and conspiracy theories in France.

The footage — allegedly filmed by a transport worker — shows hundreds of jars of mustard in an unidentified warehouse, still wrapped in their packaging.

The man claims that he was ordered by French supermarket giant Carrefour to store the jars and not deliver them to shops.

The video has been widely shared by conspiracists since it was first shared on Facebook on July 10.

Some users have spread the unfounded claim that the French government is trying to create inflation and hike mustard prices by creating a shortage.

The origin of the viral video remains unclear, but Carrefour has denied that the mustard jars pictured in the video were theirs.

“As soon as we have products in our warehouses, we do our best to get them to the shops as quickly as possible,” a spokesperson said on Twitter. 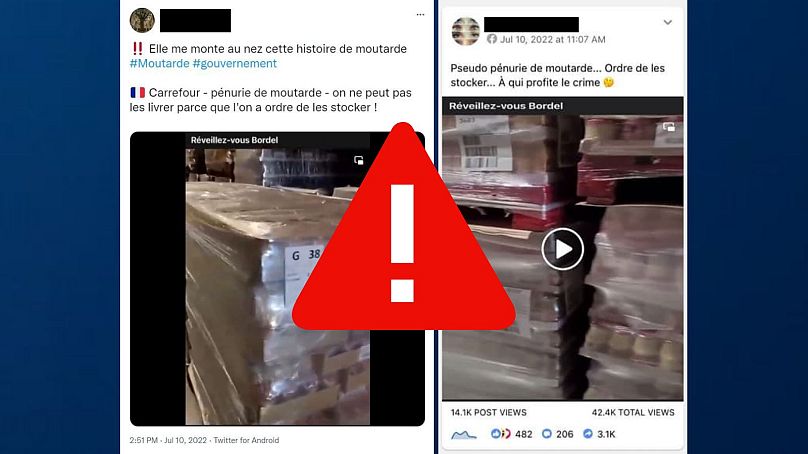 The video was widely shared on social media in France.Euronews via Twitter/Facebook/CrowdTangle

For several weeks, French citizens have been complaining about a shortage of mustard on the shelves of supermarkets and grocery shops.

After the video emerged, Twitter users even called for a nationwide boycott of Carrefour supermarkets.

But an investigation by Franceinfoidentified the brand of mustard as “Reine de Dijon” and not Carrefour.

The manufacturer told French media that the video is “fake news” and shows an unusual, mass order by another supermarket giant Leclerc.

“It was agreed with Leclerc to group together four weeks of orders at once. Six or seven trucks left at the same time, each containing 30 pallets. This explains why there is so much mustard filmed in the same place,” the CEO of Reine de Dijon said.

The manufacturer added that once the jars arrive in the same warehouse, they are then distributed to stores across the region.

Experts have blamed the shortage of mustard in France on a number of factors, including a poor harvest and drought in Canada — the world’s largest exporter of mustard grain.

According to the Canadian Ministry of Agriculture, harvests fell by 30% from 2021 to 2022, limiting exports.

France’s mustard seed production also fell by 50% after the cold spring last year, while the war in Ukraine has also impacted supplies, given that Russia is the world’s second-largest producer.

Preemies who receive mother’s own milk may do better in school, study says

First human death of West Nile virus in Illinois in 2022…