“And we stand ready to work with other arms of the federal government that seek to use their lawful authorities to protect and preserve access to reproductive care,” he wrote.

“In particular, the FDA has approved the use of the medication Mifepristone. States may not ban Mifepristone based on disagreement with the FDA’s expert judgment about its safety and efficacy,” Garland stated.

According to the Food and Drug Administration (FDA), mifepristone (mifeprex) is used with another medication called misoprostol to end a pregnancy less than 70 days developed. 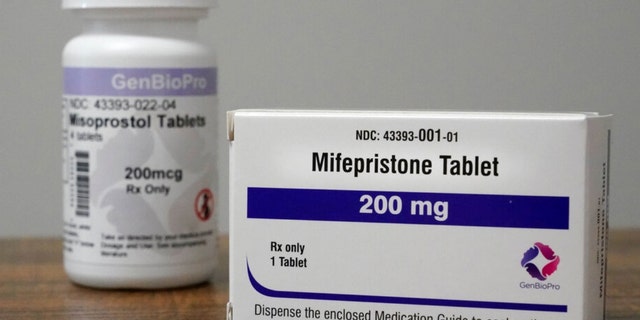 Containers of the medication used to end an early pregnancy sit on a table inside a Planned Parenthood clinic, Oct. 29, 2021, in Fairview Heights, Ill.
(AP Photo/Jeff Roberson)

The drug blocks progesterone, a hormone necessary for a pregnancy to continue.

Mifeprex was first approved in 2000 and, in 2016, the FDA approved a supplemental application based on data and information submitted by the drug manufacturer.

After reviewing that application, the agency said it determined the mifeprex is “safe and effective when used to terminate a pregnancy in accordance with the revised labeling.”

The pills are ingested approximately two days after, and anyone taking them should follow up with a doctor one to two weeks later. 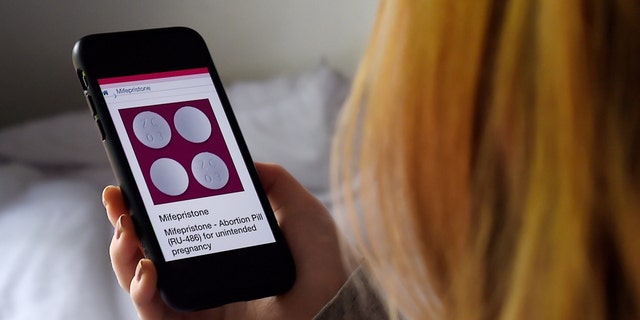 In this photo illustration, a person looks at an Abortion Pill (RU-486) for unintended pregnancy from Mifepristone displayed on a smartphone on May 8, 2020, in Arlington, Virginia.
(Photo by OLIVIER DOULIERY/AFP via Getty Images)

People who should not take this medication include those who have had an ectopic pregnancy, have problems with adrenal glands, are currently be treated with long-term corticosteroid therapy, have bleeding problems or are taking an anticoagulant, have interhited prohyria and who have an IUD (intrauterine device) in place.

Possible side effects of using mifeprex include cramping and vaginal bleeding, nausea, weakness, fever, chills, vomiting, headache, diarrhea and dizziness within the first day or two after taking the two medicines.

As of June of last year, there were reports of 26 deaths in women associated with mifepristone since the product was approved, including two cases of ectopic pregnancy resulting in death and several cases of severe systemic infection.

“The adverse events cannot with certainty be causally attributed to mifepristone because of concurrent use of other drugs, other medical or surgical treatments, co-existing medical conditions and information gaps about patient health status and clinical management of the patient,” the FDA said, noting that no new safety signals have been identified upon review of the adverse events. 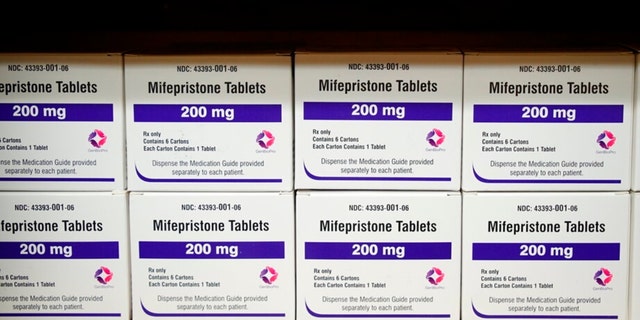 FILE – Boxes of the drug mifepristone line a shelf at the West Alabama Women’s Center in Tuscaloosa, Ala., on Wednesday, March 16, 2022.
(AP Photo/Allen G. Breed, File)

Mifepristone for pregnancy termination has also been approved in France, the U.K., Sweden and approximately 60 other countries.

According to data from the Guttmacher Institute, an abortion-rights research organization, medication abortion now accounts for 54% of U.S. abortions.

The FDA says that people should not buy mifeprex or generic versions over the internet because they “bypass important safeguards designed to protect [their] health,” and medications purchased from foreign internet sources are not the FDA-approved versions of the drugs.

Mifeprex must be ordered, prescribed and dispensed by or under the supervision of a qualified health care provider.

In December, the FDA lifted restrictions on access to abortion pills – allowing patients to receive them by mail.

The pills not available over the counter; however, only a telemedicine visit is required to get mifepristone and misoprostol in some areas. Access to telemedicine abortion is subject to state laws.

UK: Tory MP says he will meet police over government…

One protein seen as ‘critical factor’ in development of…

More rain is on the way after flooding causes weekend…